Coming out of closed session on Tuesday night, Mayor Dan Wolk announced a settlement agreement with YRAPUS (Yolo Ratepayers for Affordable Public Utility Services) that will end all litigation and preclude the group from attempting further measures aimed at stopping or otherwise delaying the water project from going through with the currently approved rates.

City Attorney Harriet Steiner announced, “We’d like to report out that the city of Davis has reached a settlement with the Yolo Ratepayers and Mr. John Munn related to the water rates case.”

“This is a total settlement that has now been approved by all sides of this case,” Ms. Steiner stated. “The city and the parties went to mediation last week and that has resulted in this settlement.

“The general terms of the settlement are that the plaintiffs will not oppose the city’s proposed water rates as set out in the current Prop 218 notice, that they will dismiss their entire case against the city, and that they will not file another case related to the water rates, the sewer rates, Measure I or do any other public process regarding these water rates.

“The city in exchange agrees that it will pay its water and sewer charges at the same standard rates that everyone else pays their water rates going back to August 2013 with offsets for the properties that the water and sewer system uses that belong to the general fund. The city has already begun making those payments approximately a year ago, the city will continue to provide water education and conservation programs, the city will allocate another $5000 for the Water Assistance Program, and in consideration of the plaintiffs maintaining their obligations in this matter, the city will pay $195,000 to the plaintiffs for the costs that they incurred in the litigation,” Ms. Steiner stated.

The city issued a statement later on Tuesday night.

Davis Mayor Dan Wolk and Attorney Michael Harrington, representing plaintiffs Yolo Ratepayers Association for Affordable Public Utilities (YRAPUS) and John Munn, “are pleased to announce that all parties have agreed on a global settlement that will result in YRAPUS and John Munn dropping their current litigation challenging the City’s approved water and sewer rates and agreeing not to bring any further legal challenges to the water rates coming before the City Council on September 16, 2014.”

The statement continues, “The settlement will, in tum, allow the City to move forward with the regional Surface Water Project approved by the City’s voters in March 2013. The settlement agreement came about as result of a successful mediation before a neutral mediator.”

John Munn, a former candidate for the city council stated, “I was opposed to the water rates adopted in March 2013. I thought they were difficult to understand and they were not fair. Though I continue to be concerned about the costs of the water, the newest rates approved by the City Council address my other concerns so I have agreed with the proposed litigation settlement and will not be a party to litigation against the new rates.

He added, “I am glad we can put this matter behind us and I look forward to working with the City Council in the future.”

Pam Nieberg stated, “With this settlement I am glad the so-called ‘water fight’ is over.”

Nancy Price would add, “The litigation and our vigorous campaign for Measure P were successful in creating fairer water rates, better accountability and transparency concerning water rate revenue and expenses, and additional funding for low income families to help with water bills. I support the settlement.”

Attorney Michael Harrington said, “I represented John Munn and YRAPUS because I agreed with their positions on the water rates. The proposed 2014 water rates address the majority of our concerns. Through the public process and the litigation we have asked for fairness, efficiency and transparency. We are satisfied that we have achieved these goals and we thank the City Council and staff for their efforts to resolve our differences.”

Mayor Dan Wolk would state, “I am grateful both sides were able to collaborate and amicably resolve this litigation. With this settlement, we as a community can now move beyond the water disputes of the past and focus our united efforts on ensuring the long-term success of our water project. I wish to thank the members of YRAPUS for all of their efforts and their willingness to come together on crafting this resolution.”

Councilmember Rochelle Swanson added, “Ever since Mayor Wolk and I proposed the Water Advisory Committee in fall 2011 we have been working diligently to strengthen the water project and build community awareness and support. In many ways this settlement is a culmination of these efforts.” 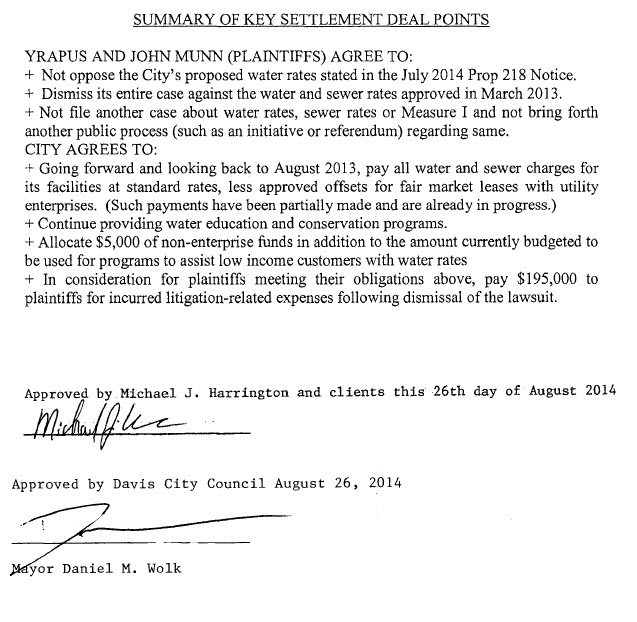 This agreement, along with the scheduled September 16 Prop 218 hearing, will bring to a close a lengthy fight over the water rates. On September 6, 2011, the city council by a 4-1 vote approved a Prop 218 hearing that appeared to pave the way for the surface water project. However, Michael Harrington among others launched a referendum drive that forced the council on December 6, 2011, to rescind the water rates and begin a lengthy public process.

The public process brought forth the Water Advisory Committee which led to the successful passage in March 2013 of Measure I. However, opponents of the project would sue the city as well as launch an initiative drive that became the successful Measure P which rescinded water rates.

In January of this year, Judge Dan Maguire would rule against YRAPUS and rule that the water rates met the constitutional requirements under Prop 218. The city council this spring and early summer, following the successful Measure P, would pass new water rates that all sides seemed to agree on as a compromise.

This agreement now paves the way for the water project to go forward, pending the Prop 218 implementation of the water rates.

Update: The City has corrected a typographical error in the Summary of Key Settlement Deal Points originally sent to the Vanguard. The first bullet under “CITY AGREES TO” should read:
+ Going forward and looking back to August 2010, pay all water and sewer charges for its facilities at standard rates, less approved offsets for fair market leases with utility enterprises. (Such payments have been partially made and are already in progress.)