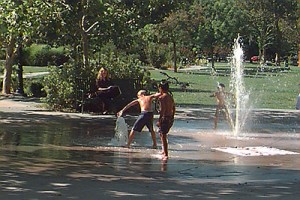 In the City Newsletter that was emailed to the public on Thursday, the city reports, “The Governor and State Water Resources Control Board enacted emergency regulations to promote further water conservation. The regulations require urban water agencies to activate their Water Shortage Contingency Plans. In Davis, this would represent a Stage 3 water shortage emergency and calls for a mandatory reduction of 30%.”

The council has the item agendized for Tuesday’s council meeting. Staff recommends the council approve a resolution that would adopt mandatory water use restrictions.

These restrictions would be effective immediately and would limit watering to three days per week, require leaks be repaired within 72 hours, in addition to other water prohibitions.

Staff notes, “Enforcement will be handled in the same manner as we currently handle similar violations.”

“City water crews have door hangers which they use to inform a resident/property owner if there is a known issue, and these are generally used for first-time violations in the hopes of educating,” staff writes. “Properties with multiple or repeat complaints will receive a letter or email outlining the problem and the expected action. Finally, code compliance staff will be deployed if a problem persists.”

On April 25, 2014, the governor issued a proclamation of a continued state of emergency under the California Emergency Services Act based on continued drought conditions. On July 28, 2014, the State Water Resources Control Board enacted emergency regulations to promote further conservation.

According to city staff, the plan imposes “mandatory restrictions on outdoor irrigation of ornamental landscapes or turf,” and this would represent “a Stage 3 Water Shortage emergency, which imposes mandatory water use restrictions, including limits on outside irrigation, to achieve a 30% reduction.”

Staff continues, “The State Water Resources Control Board emergency regulations also prohibit individuals from using potable water to wash driveways and sidewalks; water outdoor landscapes that cause excess runoff; wash a car with a hose without a shut-off nozzle; or operate a fountain or other decorative water feature.”

“Excess runoff includes situations where water flows onto adjacent property, non-irrigated areas, private and public walkways, roadways, parking lots, or structures. Violations are punishable by an infraction and up to a $500 fine for each day a violation occurs,” staff reports.

“This year’s drop in static water levels in the city’s wells is concerning and reflects the high demand on groundwater in this region of Yolo County, coupled with the impact of the ongoing drought in California,” states the City’s General Manager of Utilities, Herb Niederberger, “Such a drop in water levels triggers water conservation as stipulated in the City’s Urban Water Management Plan.