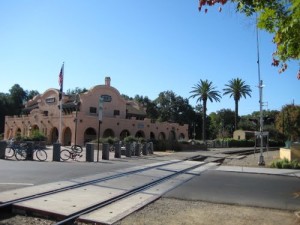 In the past few days, I have seen proposed different ways, innovative ways that this may be accomplished. This week for example, the Sactown Magazine published “The Aggie Express.” They see it as a way to connect their city with the best and brightest young minds, but perhaps their idea will work both ways.

They write, “Civic leaders around the world are working hard to attract the best and brightest young minds to their respective cities. Meanwhile, we’re losing thousands per year. Here’s how to get back on the right track.”

“National observers of urban trends have discovered that a city’s most valuable asset isn’t quick and easy access to the airport, but rather a young, educated workforce,” they article notes. “As it happens, many of our region’s best and brightest live about 11 miles west of downtown Sacramento, in Davis. The problem is, the vast majority of UC Davis students aren’t staying in the area when they graduate. Most are taking their fresh new diplomas—along with their aspirations, optimism, energy and ideas—to other cities instead.”

They argue that, according to stats from the UC Davis alumni association, only about 13 percent of living UCD graduates reside in Sacramento County – as opposed to 40 percent for Sacramento State. Sactown Magazine writes, “That’s an alarming statistic, and should be a massive wake-up call for civic leaders here.”

“So what can be done?” they write. “Near the top of the list should be to increase the ease with which students can access Sacramento and, by extension, the rest of our region. The most obvious way to do that is to extend Sacramento Regional Transit’s light rail line to Davis, via West Sacramento, as expeditiously as possible.”

They continue, “Quite simply, we need these students interning at more companies in Sacramento, getting more summer jobs here, and coming here to play—going to concerts, restaurants, nightclubs and sporting events. It’s this combination of career opportunities and quality of life that will help keep them here after they graduate. But it’s critical that we make it easier for them to get here first.”

They add, “As if that weren’t reason enough to bridge the 11-mile gap between our two cities, UC Davis is now looking at creating a third campus—in addition to its main campus and the UC Davis Medical Center in Sacramento—in the railyards or West Sacramento. A light rail extension to Davis would make this side of the causeway an even more attractive option for the school’s leaders. And it would make the new Davis route an even stronger investment for Regional Transit.”

“The reality is that all major cities compete with each other. They compete for businesses, sports teams, cultural events, conventions, tourists and so on. But young, smart, ambitious people are the greatest prize of all. And while we’re doing a great job of producing them, we’re watching thousands of them leave every year,” they continue.

The magazine reports, “Regional Transit’s chief operating officer Mark Lonergan says that if regional interest—and dollars—were there, a Sacramento-to-Davis extension that would run through West Sacramento could be highly attractive.

“Lonergan believes that not only would the university and its 34,000 students provide a strong customer base, but so would the commuter base between the three cities. He also believes that a route to Davis would complement the proposed future streetcar system connecting downtown Sacramento and West Sacramento, perhaps even sharing some of the same tracks and providing easier access to Raley Field from both sides of the causeway. And downtown Sacramento’s new arena would benefit as well, tapping into a much larger audience for Kings games and concerts.”

Sacramento may see a regional transit option as a way to get students to Sacramento, Davis might see it as a way to transport the highly educated workforce needed for an Innovation Park to Davis, and still provide access to cheap and available housing in the short term.

There is another idea being floated by the Yolo County Visitors Bureau as a way to get bicyclists to ride to Davis, patronize local businesses and get a free train ticket back to Sacramento on the Capitol Corridor trains.

They call the program “Bak2Sac” and they have gotten businesses in Davis involved as co-sponsors seeing it as a way to benefit from increased visitation.

“The program is really pretty simple,” says Alan Humason, executive director of the YCVB. “Come to Davis on or with your bike, and visit participating businesses to pick up a voucher for a free train ticket back to Sacramento.

“The voucher is good for any train leaving after 7 p.m. on weekdays and after noon on weekends. Turn in the voucher at the Davis Amtrak station and receive the train ticket, free. Hop on board with your bike and go Bak2Sac!”

Davis businesses such as Bistro 33, Monticello Seasonal Cuisine, Ken’s Bike-Ski-Board, Haute Again Consignment and Sudwerk Dock Store have stepped up to sponsor, with each location having a procedure for claiming the voucher.

Right now the program is limited to July 15 through December 19 and only available for off-peak trains.

It is not clear that this is really going to encourage people to bike across the causeway and take the train home, but this is only the beginning of such thinking.

In both cases, the question will ultimately involve funding. As Sactown notes, “Would West Sacramento or Davis or Yolo County or perhaps even the university be willing to share some of the cost (of expanding regional transit)? If so, such a train could jump to the top of Regional Transit’s priority list, right where it belongs.”

They continue, “Or could private dollars be available? In 1988, developer and then-Sacramento Kings part-owner Gregg Lukenbill offered that he and his partners would contribute up to $30 million to help fund a light rail extension to their Natomas arena and to the airport. He told The Sacramento Bee, “If they pay their fair share, we’ll pay our fair share and get the damn thing built in three or four years.””

They argued, “It didn’t end up happening, but that’s the kind of pioneering talk that built the West.”

The bottom line is that these do not have to be the solutions or even part of the solutions, but it is time now to start thinking outside of the box and outside of a car-trip across the causeway to address our commuting solutions and our housing-jobs balance. It may be that, as we continue to expand, we will take a different view about how we can get people from affordable housing to work.

Share:
Tags:BicyclingCity of DavisInnovation ParksLight RailRegional TransitYolo County Visitor's Bureau
Previous : Eye on the Courts: Can We Acknowledge the Wood Execution Was Botched?
Next : Greenbelt Issue at Paso Fino Remains a Touchy Subject

46 thoughts on “Connecting Davis to Sacramento”