On a night where dozens of citizens came forward to oppose the city’s acquisition by the police of the military MRAP vehicle, many of whom were speaking for the first time before council and gave impassioned speeches in opposition to the vehicle, it was the city council itself that was left to wrestle with how to approach the situation in a manner that reflected the values of the community but respected the dangerous work that the police have to do.

Ultimately, the council had to make the call. The council had its own passionate debate over how to proceed before narrowly, on a 3-1 vote with Brett Lee dissenting and Rochelle Swanson ultimately abstaining, adopting a motion made by Mayor Pro Tem Robb Davis and seconded by Mayor Dan Wolk.

Several dozen people came to the chambers – all but three expressed some form of opposition to the vehicle. (The Vanguard will have a follow up story that captures the public comment portion of the discussion).

Police Chief Landy Black said that the acquisition was justified and “not spurious on the department’s part. We have a genuine job-specific need for the types of equipment that most people wish that we wouldn’t have in our community because of the nature of the job that we have.”

He said there “is a very obvious tactical need for this vehicle.” We employ officers with a joint SWAT team with West Sacramento, something he called “an unfortunate but necessary commodity of our police department to deal with very volatile, risky, dangerous circumstances.”

In the last five years, the city has had 43 tactical deployments of our SWAT team to deal with high-risk search warrants, going to a home where people inside have criminal records and weapons. He cited a specific incident in east Davis where there was high power weaponry involved in a domestic situation where the perpetrator had three weapons that he fired.

Both Chief Black and Assistant Chief Darren Pytel showed examples of weapons found in the community and expressed concern about safety of the public and officers with these high powered weapons with ranges of half a mile that can penetrate both houses and personal protection.

Mayor Pro Tem Davis put forward a three-part motion. First, he said, “We instruct staff to return with options for disposing with the MRAP in the most expeditious and low cost manner within sixty days.” Second, “That we review donated or surplus material acquisition noticing guidelines to assure that major donated or surplus equipment … acquisitions by any department are reviewed by the city manager and city council.”

Third, “That we proceed with a very public update of the public safety issues related to active-shooter situations, warrants, and that we look at the solutions that do not represent repurposing of a military vehicle to face them and we hold public participatory forums to publicly share ideas on the options.”

In his comments to council prior to his motion, Mayor Pro Tem Davis indicated that he felt that council needed to weigh the probability of the need to use this vehicle in the community as well as the chances that it would be effective if the situation arose.

He further noted that we need to ask ourselves how far do we go to reduce our risks down to zero.

Mayor Pro Tem Davis said that “symbol matters,” and “we are a species that uses symbol” and “this symbolizes the most destructive force on the planet which is the US Military. I think we have to acknowledge that.”

He told the police chief, “I appreciate the trust that you’ve built in this community… this will hurt it.”

However, Brett Lee stated, “I do not support the motion because I think it makes the same mistake that got us to this situation which is we should discuss what the need is, and then pick what the most appropriate item is to address that need.” If we decide we do not need any equipment, we can choose not to acquire anything.

“In retrospect we probably should have been involved (in the decision), given the nature of the acquisition,” he said. “To just return it, without actually having had that discussion… if we return it, then we don’t have the ability to get it back. Two wrongs don’t make a right.” 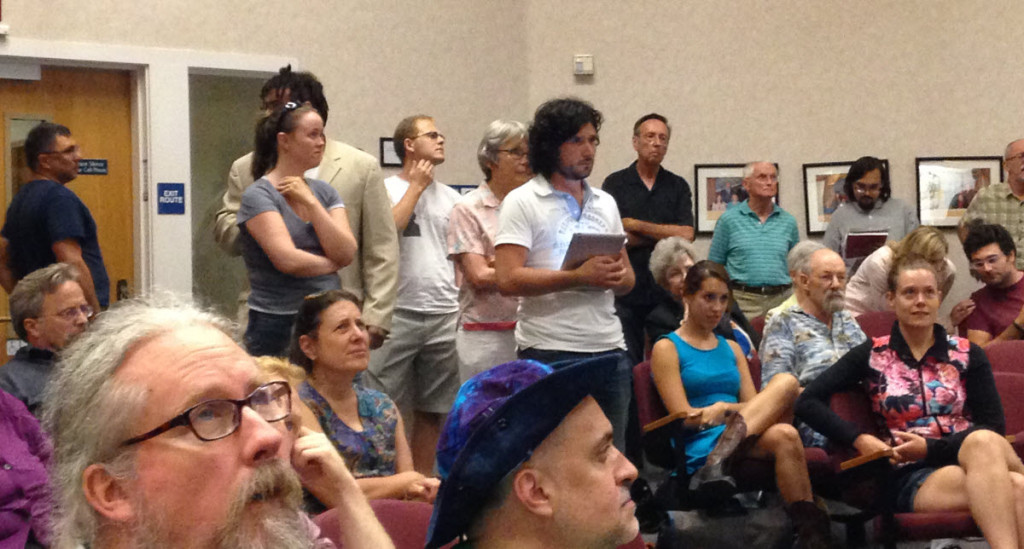 “Three weeks from now if people feel the same way, we give it back,” he said, citing the process as being critical.

Robb Davis would respond, “I agree with everything that you’re saying except that I don’t think there’s going to be a scenario by which this vehicle will be acceptable to me or to this community.”

Councilmember Lee attempted a substitute motion to prevent the use of the vehicle unless the council authorizes its use. The council would then come back in four weeks to make a final disposition after studying the issue more.

He clarified, “We pretend as though we don’t have it and then we need to affirmatively say yes we want it or no, we don’t want it. We then follow the process that would have been best to have had from the beginning.”

Councilmember Lucas Frerichs said, “It’s hard to pretend that we don’t have it.” He would add that he supported the original motion on the floor.

Mayor Wolk explained his concerns with the vehicle, questioning the need as well as the perception in terms of the national trend of the militarization of the police force. He spoke of the pepper spray incident which he called “a black eye” for this community and “an overreaction by the police and law enforcement.”

“This council shouldn’t be in the role of dictating to the experts about what exactly we need to have,” he said, “but I think when it comes down to really big critical items like this one that really galvanize the community, I think there is a clear role for this city council in terms of its representation of the community.”

He added, “I do agree with Robb that I don’t see a scenario where I end up being okay with having this vehicle in our fleet.”

Brett Lee added a friendly amendment for a fourth point, which states, “The council would take the time over the next sixty days to meet with the police department to better understand the need for an armored vehicle at some type for the Davis Police Department.”

It was clear, however, that the line of separation between Brett Lee, and to a lesser extent Rochelle Swanson, and the other three was whether the council should leave open the possibility of reconsidering the vehicle in sixty days or make the decision immediately to return the vehicle.

Rochelle Swanson stated, “I think we need to right the wrong, and that means unfortunately having to do the process ourselves.” She didn’t want to make the same mistake of dismissing the equipment out of hand. “I feel like the motion just presupposes our decision,” she stated.

Robb Davis would again reiterate that he doesn’t see a scenario where this piece of equipment “will be acceptable to me and I won’t vote for it.” He agreed fully with going through that process, but did not believe it would change his mind.

Again, the council voted for this motion on a 3-1 vote, with Brett Lee in dissent and Rochelle Swanson abstaining.

159 thoughts on “Council Turns Back Tide of Police Militarization”