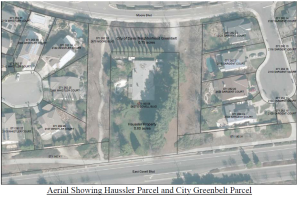 Later this week, residents will be meeting with Mayor Dan Wolk to discuss their concerns with the proposed Paso Fino development in Wildhorse. According to organizers, “Soon to come before the City Council, this plan calls for the sale of 0.75 acres of public greenbelt to a private developer to accommodate his plan to put 8 to 12 units on a property zoned for 2. We do not believe the city should be selling public open space for the gain of a private developer.”

A Change.org petition has emerged with 319 supporters and goal of 500 signatures overall.

It reads, “Help us prevent the first sale of public greenbelt by the city of Davis, Calif., to a private developer. Our 60 miles of tree-lined greenbelt make Davis one of the nation’s most liveable cities. Tell Davis city officials that greenbelt must not be sold in the absence of a clear policy, one that carefully balances the public good with the needs of private developers — and ensures that any greenbelt sale takes place in the open. Sound public policy will help preserve our greenbelts now — and for future generations.”

The petition states, “To: City of Davis, Calif., City Council

“Save Davis greenbelts. Develop a clear policy governing when a city greenbelt may be sold to a private developer. This policy must carefully balance the public good with the needs of private developers — and ensure that any greenbelt sale takes place in the open.”

However, as we reported in early July, this is not a typical greenbelt arrangement.

Mike Webb, the city’s Director of Community Development, told the Vanguard that the greenbelt here is “not the typical greenbelt configuration” that the public would ordinarily envision as a long, city maintained stretch of grass and vegetation that people can walk or bike through.

As developer Jason Taormino explained to the Vanguard, from his perspective, “the 2009 Staff report defines the land as a private buffer to benefit the Haussler property and protect them from the new homes that were built in Wildhorse in approximately 1998.  The sale of this private buffer in order to promote infill development is reasonable as it is no longer needed to protect the Haussler property from the encroachment from the new neighbors in Wildhorse.”

“The greenbelt on the east side… that was created for the Haussler family, it wasn’t created for the Wildhorse subdivision,” Dave Taormino explained to the Planning Commission.

In the staff report, it noted, “The City does not have any specific guidelines regarding elimination of greenbelt parcels, or what to do when an infill densification project involves the potential to remove an existing greenbelt space. Therefore, this becomes a policy issue to be weighed by the City Council.”

“No one ever envisioned that the city would start selling off the Greenbelt,” Ms. Hanson stated. She added, “80 percent of the neighbors here tonight bought their homes never envisioning that that land would be sold off for development except for the four houses which people acknowledged that they knew about and that they support.”

Mike Webb told the Vanguard he believes that the concerns of the neighbors and others in this regard are overstated.

He said, “The reports of the City putting greenbelts on the market or entering into a new trend of selling parks and greenbelts for private development I think are a bit far-fetched as this is the only property that I can think of that has ever had any such discussions, either current or past (e.g. 2009 where an agreement was reached but not executed). It is also not the typical greenbelt configuration.”

The Paso Fino subdivision is located at 2627 E. Covell Boulevard on a 0.79-acre private property, and 2675 Moore Boulevard (a 0.75-acre public property). It is surrounded to the south by Covell Boulevard and to the north, east and west by an improved Neighborhood Greenbelt parcel.

The Hausslers built a single family home in 1966, but the home is now unoccupied. When Wildhorse was build in 1998, land was created as a private buffer to benefit the Haussler property both the city and developers claim, and protect them from the homes built in Wildhorse. That land is currently designated as greenbelt.

The plan calls for the existing residence to be demolished and the reconfigured property would result in eight units.

In 2009, the city approved a four-unit development on the subject site, which requires a land transaction between the city and the property owners for the westerly greenbelt land. That plan would have retained the greenbelt to the east. However, the land transaction was never executed and therefore the approval was never effectuated, according to the staff report.

Staff notes, “The current proposal would change the easterly greenbelt to Residential Low Density designation in order to allow the proposed eight-lot residential subdivision. This land use designation change to accommodate the proposed project does not include the land transaction negotiation. However, approval of this land use change request is subject to the City Council approval of the land transaction, a separate action.”

“(This) was meant to be an innovative experiment,” Developer Dave Taormino said. “We should embrace all of the policy and debates about neighborhoods, aging in place in particular. So we have four single story houses.”

You can read more about Paso Fino here.