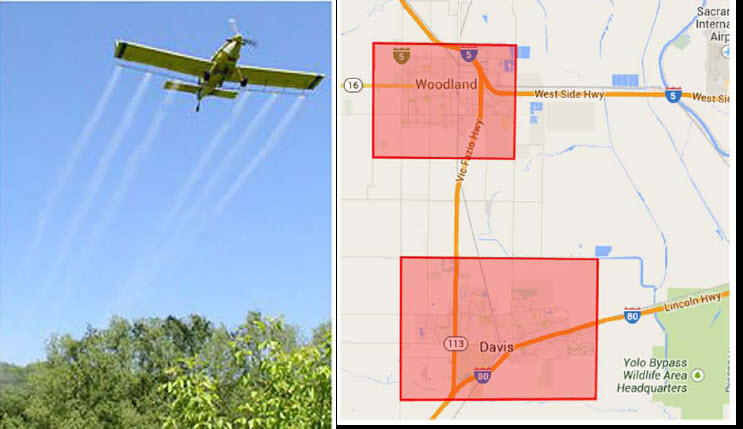 The Sacramento-Yolo Mosquito and Vector Control District (SYMVCD) announced their plan to aerially spray pesticides over the cities of Davis and Woodland on Wednesday, August 6 and Thursday, August 7 from 8 pm to midnight. Aerial spraying will take place over two areas.

The Woodland block is about 12,000 acres from Churchill Downs Ave on the north, to County Road 25A on the south and from County Road 97 on the west to County Road 102 on the east. For exact spraying locations visit www.FIGHTtheBITE.net.

The chemical being sprayed is an organophosphate under the brand name “Trumpet.” The main component of Trumpet is Naled, which is a cholinesterase inhibitor containing DDVP (Dichlorvos). Naled is toxic to fish, birds, and other wildlife. DDVP is classified by the State of California under Prop 65 as a chemical that causes cancer (class 2B carcinogen). Individuals with certain medical and pre-existing conditions are the most vulnerable.

Naled is also non-discriminatory and will kill beneficial insects including the highly vulnerable bee populations already at risk from neonicotinoids. While adding to the toxic chemical load of the human population, the further destruction of beneficial insects exacerbates the risks by eliminating the natural predators of mosquitoes.

The UC Davis MIND Institute’s recently published CHARGE Study shows association between maternal exposure to agricultural pesticides, specifically organophosphates, and autism in offspring. According to the study, pregnant women who lived in close proximity to fields and farms where organophosphates were applied experienced a two-thirds increased risk of having a child with autism spectrum disorder or other developmental delay.

According to principal investigator, researcher, professor, and Vice Chair of the Department of Public Health Sciences at UC Davis, Irva Hertz-Picciotto, we need to find ways to reduce exposures to chemical pesticides, particularly for the very young and especially during gestation.

While the Center for Disease Control (CDC) admits that only a miniscule percentage of people have even a remote chance of contracting West Nile virus (WNv), the agency continues to promote massive spraying of urban areas with toxic pesticides, creating health risks for everyone.

According to a recent CDC announcement put out by CNN, about 80% of people who are bitten by infected mosquitoes will not show any visible symptoms or become ill in any way. Of the 20% who do show symptoms, only about .5 of 1 percent will develop more serious symptoms. And, most of these individuals have predisposing conditions, such as weakened immune systems. Statistically, this translates to a virtually zero percent chance that the average person will experience any health problems associated with WNv.

At least one out of three people in the United States will be diagnosed with cancer in their lifetime. The perceived threat of WNv does not justify exposing entire populations to health destroying pesticide sprays known to increase cancer risks.

Residents in these areas need to be alerted that they will be exposed to this cancer-causing and autism-linked organophosphate. They need to stay inside to avoid breathing the pesticide and keep their windows closed during the spray periods. The days following the spray episodes, they should wash off their gardens and sidewalks to avoid tracking the pesticides into their homes.

We are calling on the SYMVCD to employ safer, more effective methods of mosquito abatement and reduce public health risks by abandoning the dangerous and reckless practice of massive aerial spraying of neurotoxic poisons on the unwary public.

34 thoughts on “Group Warns About Dangers of Aerial Pesticides”