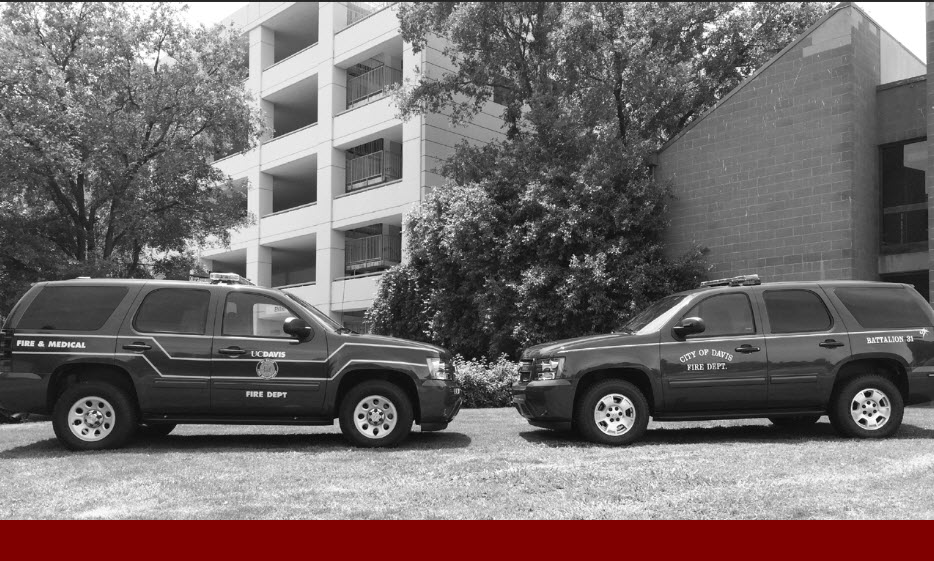 Your Shared Fire Management Team is pleased to share the June 2014 monthly performance report. The hot days of summer are upon us and with that the fire danger and activity thro 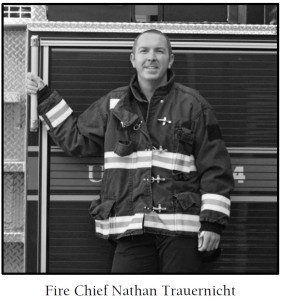 ughout California has increased dramatically. Already Davis and UC Davis Fire units are responding as part of the state’s mutual aid system to significant fires that threaten communities and our precious natural resources. More locally we are seeing a spike in wildland fire activity as well, with small vegetation fires cropping up within our jurisdictions, and larger fires occurring throughout Yolo county.

These summer and fall months can be particularly challenging for firefighters and their families as when strike teams are away for long periods of time, so do families go without mom or dad at home. It is a difficult balance to strike, but it’s part of the job we have chosen to do and the sacrifice doesn’t go unnoticed. We receive letters from all over the state where our fire crews go to help expressing gratitude for protecting communities that are not our own. This is one of the basic tenants of mutual aid, giving, knowing that any day our community could be the one to receive.

This month I wanted to take the opportunity to draw your attention to both the value and the demands of being a part of California’s fire mutual aid system. I also hope you will join me in expressing thanks to our firefighters from DFD and UCDFD who are away from their families for a great period of time either on strike-teams, or covering stations here at home, while we serve our neighbors in their time of need.

Your entire Shared Fire Management Team wishes you and your families a safe and fun summer!

Our Performance At A Glance

The vast majority of both department’s calls for service are emergency medical in nature, as evident in the charts below. These pie charts are the 30,000 foot view of how each agency’s response is broadly categorized. Keep in mind that these only depict a single month and that call type, just like volume, changes based on factors heavily influenced by time of year. An example in the City is an increase in Fire – Wildland/Grass during warm weather months, as that includes grass/vegetation fires. Likewise, the Campus sees an increase in EMS during months like October when school resumes. Our annual reports (released in August) will provide the full picture of what this data looks like spread across an entire year.

The table below depicts what percentage of the time we achieve common response time benchmarks using call data ONLY from the Davis city limits and campus geographical boundaries. Special districts are found later in the report and have no formally adopted response time criteria at this time. This data is provided to paint a general overview of response performance. (Note: call counts below are non-cumulative, while performance is.) 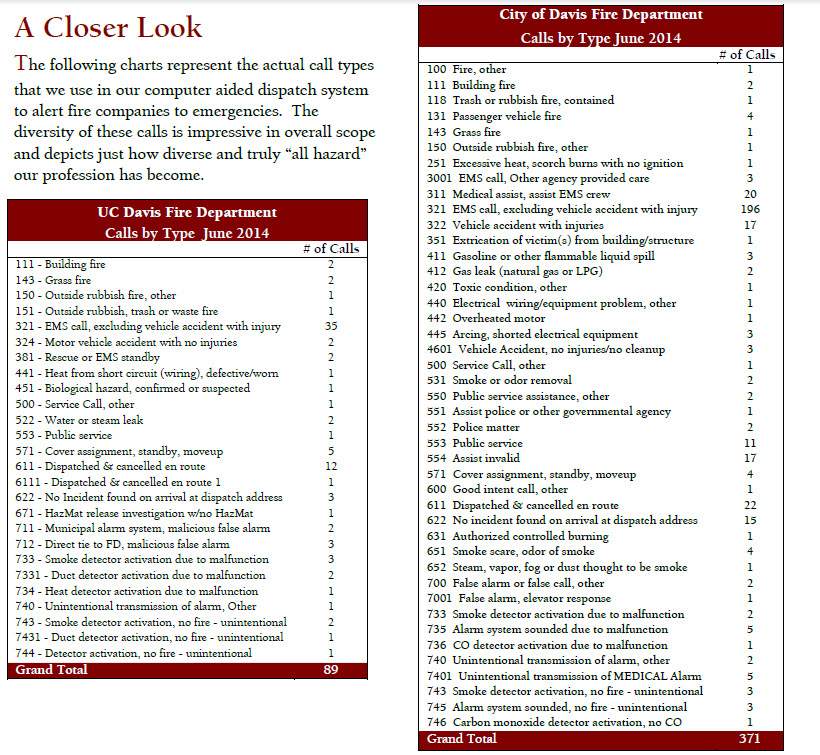 For the purpose of this report, response readiness refers to a fire company being in its home station, or home district, and ready for a call. Why is this important? Simply put, if a fire company is out of district (out of position), response times increase to that response area.

As you can see below, the focus of our analysis is on the response district of City of Davis Fire Station 31. Why do we call this out? Because this district has the highest call volume and the highest number of stacked calls (also known as simultaneous calls). So when we show a “reduction” in the 2014 month-to-month comparisons, we are basically showing the amount of responses in which Engine 32 and 33 are now remaining in their home districts, when in the past they would have been out of position and response time to those districts would have been extended.

Whenever an apparatus is called to cover another station or district it vacates its first due district to do so.

You can clearly see the impact of Engine 34’s role now that the boundary has been dropped in the amount of times that 32 and 33 now stay in their district’s ready to provide service to those portions of the community.

The course is designed to develop the fundamental skills to safely combat today’s fires. The modern fire behavior update explains how to understand and apply knowledge on the physics of fire, the current scientific studies, what it means to us on the fire ground, and how to select tactics that meet your fires situational demands. One must know the “why” before performing the “what.”

Air Track Management is understanding flow path, the physics of what the fire is naturally doing, and managing the heat release rate by controlling the ventilation profile. Together these presentations correlate firefighter behavior, scientific data, and modern tactics that result in balanced risk in rescue, firefighter safety, and property conservation. Time, type of construction, and weather all impact the decision making process and will be evaluated during these didactic and manipulative training exercises. 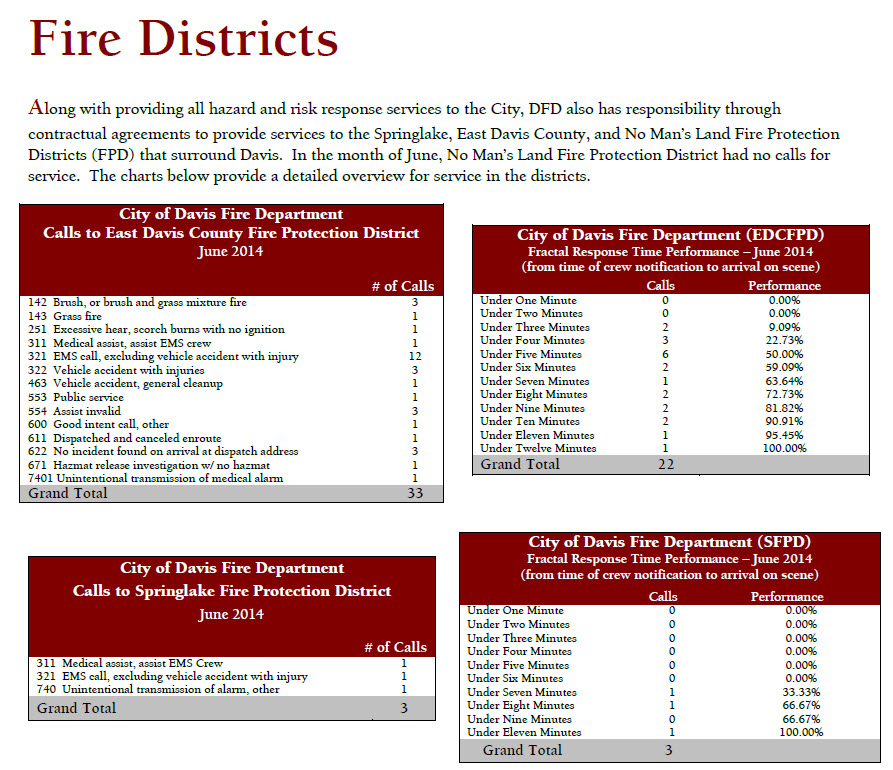 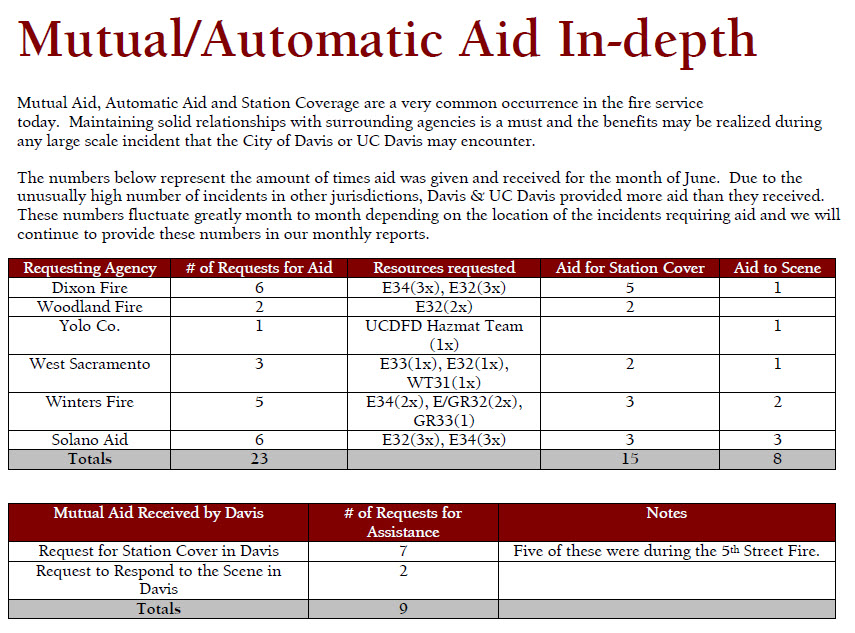