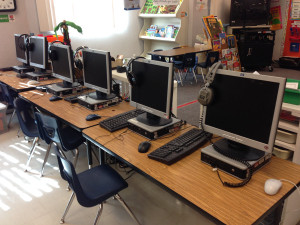 We see a wide open door to the future for our children in the Davis Joint Unified School system, but we parents and educators need to walk right through that gate, bringing our children with us.

Every discipline, from biology to economics to music, is becoming a branch of information science, due to historic advances and due to the rapid restructuring of industry in every field.

Children need to learn the principles and practices of computer programming, of information science, and of systems design, in order to succeed in this new world — regardless of what career path they chose.

In the US, our educational systems are hard-pressed to keep up with these new requirements. Students in the US school system fare poorly when compared with counterparts in other countries, in terms of science and mathematics. But those are “old school” subjects.

Why should we parents and educators focus on digital literacy as a priority? Aren’t all the sciences important? Why pick information science over English, Art, or Social Science?

Actually, this view demonstrates the false dichotomy in which we are conceptually trapped.

Scratch the paint on almost any business these days and you will find a software company underneath.

Most of the legacy brick and mortar jobs our kids might have had are gone, replaced by software-associated versions of the old world. We need to prepare our kids for the world which is already here and expanding all around us, so that they are able to control their own software, and hence their own destinies.

A local example of the transformation we are living though is the demise of Border’s Books and Music, a store near and dear to us in Davis, while it existed. Borders sold off its ebook division to Amazon, saying ebooks were not strategic, keeping its brick and mortar stores. As we now know, this was “end of story” for Borders.

Amazon rules and Borders is a fond memory. Amazon is currently the largest bookseller in the world. As Mark Andreesen, the famous software designer and investor, points out in an essay, “Even the books themselves have become software.”

So the artists among our kids will need digital literacy to have control of their graphics software, potentially for web design coding, and to publish and protect their work, among other things.

Keeping our auto tech kids in the game means they need to have a grip on the software embedded in today’s cars, an increasing component, now 40% of the electronics for some cars, and especially for the hybrids.

Every line of study should have digital literacy embedded in the course work, if possible, in our opinion.

Another trend which should motivate us to begin embedding digital literacy in our schools is that our students now compete on a global scale for the same college spots and jobs with kids throughout the world. Our kids should be well prepared and be able to compete on a global scale. After all, it is here that the most successful tech companies have been started up: Google, Apple, Amazon, Twitter, Pixar, to name a few. We should be in touch with and generate programs which would be useful to kids who eventually apply to US tech companies for jobs.

The barriers to access as far as digital literacy goes in our Davis system are legion. Begin with the dearth of coding classes in the elementary schools. In this sense we are, unfortunately, in good company. Only 5% of US elementary schools have computer programming classes available to their kids. Yet this age is just when kids are able to pick up the basics easily. Instead of the boring old gray and white text of yore, there are wonderful new colorful languages. These are free for the taking and are kid friendly (Scratch.MIT.edu,), for example. These languages allow the child to create marvelous games and other work in the blink of an eye.

Looking at our older age group, at Davis High School and Da Vinci High, there are 2 classes in coding and robotics. The potential is clearly demonstrated, though: the high school robotics team is called Citrus Circuits. It is led by Steve Harvey, a Da Vinci High School math teacher. The team won its national competition. 50 teams participated in the regional competition, alone. Now Mr. Harvey has a class which will continue the robotics success and expand the knowledge of the involved students. We ask only, where are the other classes?

One important reason to include everybody in the program is to eliminate the current and growing digital literacy divide.

Looking at major tech company diversity reports (Google, Facebook, Twitter) it is clear that girls and minority kids are, as they say, underrepresented. As well, they are vastly underrepresented in the pipeline toward computer science degrees, and therefore jobs.

With what other degree could a kid potentially spend 4 years in college and make a $100,000 walking out the door? And there is room for more, at this moment.

According to the Bureau of Labor Statistics, only 30% of the 1.4 million jobs created in CS-related fields will be able to be filled by 2020.”

But, in the case of girls, most universities report less than 10 percent of their female students pursue undergraduate degrees in computer science.

How could we embed digital literacy in our Davis schools?

We could build a systematic series of courses starting in elementary school which would reflect requirements of digital literacy, including a ladder of computer science classes beginning in kindergarten or first grade. We could include web design and 3D printing in art classes, bioinformatics in biology classes, and in general put elements of the new world right into the hands of our teachers and children.

So, will we parents and educators walk through the open door of the future and establish digital literacy in our schools for everyone, or will our district be invisibly bypassed in this digital age?

We hope our district leaders will take the bold steps needed to advance 21st century education in Davis.

Jessica Chabot is the Director of Davis Code Camp. Davis Code Camp is a new venture in computer education. Their eventually offer the full range of after-school and weekend courses in all aspects of digital arts and technology: software, animation, web design, and multi-media. For more information go to: daviscodecamp.com.