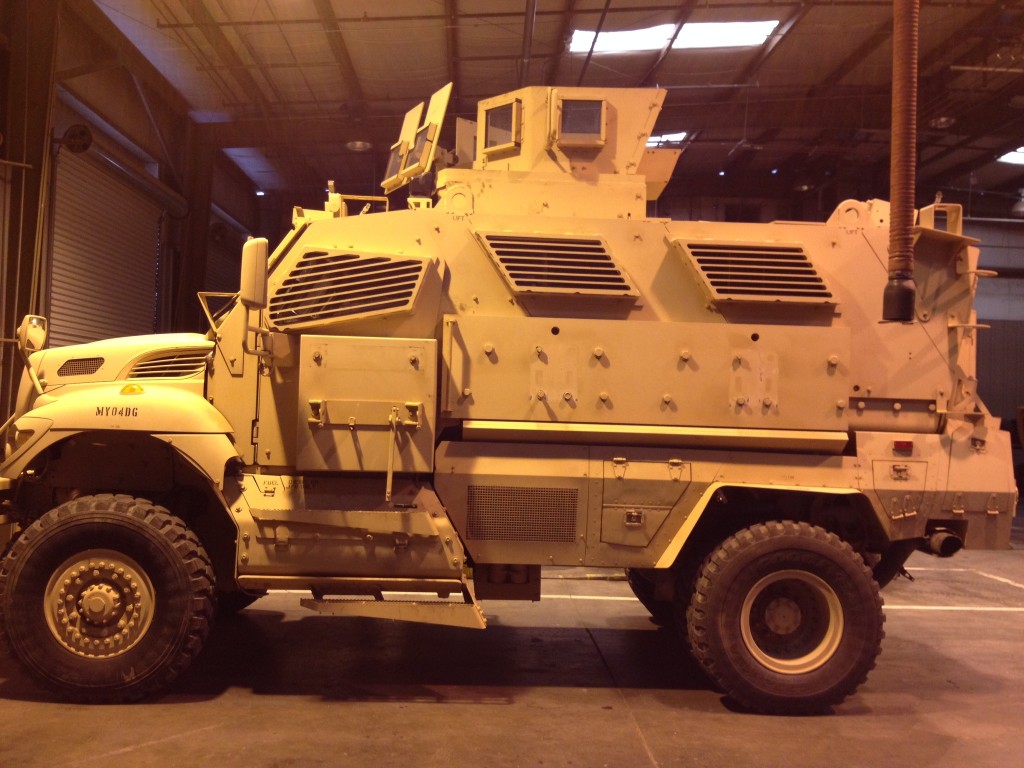 The timing of the disclosure could not have been worse from the city’s perspective and it is not without some irony that, had the city immediately disclosed the acquisition of the MRAP (Mine-Resistant Ambush Protected) vehicle when they acquired it, it might have avoided the conflation with Ferguson, Missouri, and spared the city some grief.

At the same time, as we have noted, the concern about the militarization of the police did not materialize in Ferguson. Radley Balko wrote a prominent piece in the Huffington Post last fall and the ACLU had their 88-page report from June 24 that we cited on Wednesday.

For those who are arguing that this is not a true military vehicle, the city staff report, written by Chief Landy Black notes, “The vehicle, valued at $689,000, is known by its military acronym, ‘MRAP’ (Mine Resistant, Ambush Protected). It is one of the smaller versions of armored vehicle the military had been employing in Afghanistan.”

Chief Black argues, “While one feature of the vehicle is its mine resistance capabilities, it was acquired because its ambush (ballistic) protection makes it the perfect platform to perform rescues of victims and potential victims during active-shooter incidents, and to more safely deliver officers into active-shooter incidents, barricaded hostage crises, and/or other or environments involving armed offenders.”

While there are defenders of this acquisition, the fact that this vehicle is highly unlikely to be used, and requires great expense for upkeep and training, has led more pragmatic people to question its appropriateness.

However, I think the most appalling aspect of this entire saga is the utter political deafness to the political reality of bringing a military police vehicle into a community that has historically and presently been opposed to military operations – from its nuclear-free zone days to its present resolutions against armed conflict abroad.

To compound matters, the city council, the very body with the most connected ear to the community, was excluded from this decision. Councilmember Lucas Frerichs immediately expressed surprise as to this acquisition and Mayor Dan Wolk argued that he saw no need for the vehicle.

Chief Black justified this acquisition under 2009 City Council resolution 09-033 which he says “(renewed) authorization for the Davis Police Department to acquire surplus federal/military equipment suitable for use in conventional law enforcement activities through the 1033 Program of the Defense Logistics Agency, Law Enforcement Support Office (DLA/LESO).”

However, that resolution, which was passed on April 14, 2009, does not seem to imply that the city would get military equipment. The staff report states, “The Davis Police Department has participated for a number of years, and procured various items, from the Surplus State and Federal Property program administered by the State Department of General Services.”

The resolution itself simply states, “The City of Davis Police Department desires to participate in the State of California Dept. of General Services Surplus Personal Property Program.”

It continues, “The City of Davis is hereby authorized to participate in the State of California Department of General Services State and Federal Surplus Property Program” and it authorizes four officials “as city representatives to acquire surplus property through the auspices of the California State Agency for Surplus Property and accept responsibility for payment of incidental fees by the surplus property agency under the Terms and Conditions as listed on the attached documents.”

There is no mention in this resolution that this would mean the acquisition of “military equipment,” and it was a consent item and was never discussed. To use that to justify the acquisition of this vehicle without community discussion certainly falls within the realm of the resolution, but it ignores the political reality of the community.

The community outcry that has occurred is certainly predictable. Our initial article generated more web traffic and social media interactions than any article during the Nancy Peterson saga. It has been covered regionally on the Sacramento Bee and various news stations in Sacramento. And as we reported yesterday, there is now a Change.org petition.

My concern from the start is not that I think the police in Davis are going to use this vehicle as military equipment was used in Ferguson, but I do think there are dangers here.

A police spokesperson on one of the news stations in Sacramento indicated that this could be used to serve high risk warrants for people potentially armed and dangerous – that already starts to get away from active-shooter incidents and barricaded hostage crises.

Many have argued that if that unthinkable situation comes we should be prepared, but, like anything, planning for the worst case scenario needs to be mitigated against risk.

There are costs to training personnel to use the vehicle safely and keeping the vehicle in condition for use. In a time of budget crises, are these expenditures worthwhile against the remote possibility that they would ever be used?

The Chief, as we reported, made a strong case as to why we should have the vehicle, however, there are many downsides as well. There is the risk of mission-creep. We may have good intentions now, but we saw how quickly and easily the a relatively benign situation on the quad at UC Davis in November 2011 turned into a national incident.

There are civil liberty concerns that have been expressed in the national press regarding the use of such vehicle.

While the city of Davis could pass a resolution that severely restricts the use of the vehicle – what is to enforce that use in the future? The DA is reluctant to sanction law enforcement even for egregious violations of protocol such as the pepper spraying of unarmed protestors and the shooting of unarmed individuals.

Finally, we need to think long and hard as a community about the line between safety and tyranny. Tyranny is a big word, but Americans are very sensitive to the need to maintain the line between the military and police apparatus, and while military style vehicles may provide officers and even the public with a measure of safety, blurring the lines between police and military for some will hearken to issues of turning this nation into more of a police state and a military state.

I fear the day when we walk down the streets and see military vehicles as we attempt in vain to keep order in a chaotic and changing world.

In a city like Davis, you are turning a political blind eye and deaf ear to the realities that the citizens here are not going to be willing to have their police force turn to military weapons in the remote possibility that they might be needed and would work as advertised.

More realistic is the scenario painted in an email from a reader.

They wrote, “I have seen these tanks deployed on two occasions, both peaceful protests. Their presence was intimidating and rationalized by the police on both occasions as being because they had ‘information that dangerous people might be present in the crowd.’”

In my view, then, this was a mistake. And the mistake here I believe happened when the city manager’s office failed to inform the city council before this decision was made.

The police department has been making many strides in the last several years to improve their operations. I have tremendous respect for Chief Black, but, in this case, I do not believe this was a good idea. A military vehicle is a bad idea in many locations, but in a place like Davis, it is simply not going to be tolerated by the majority of citizens.

We ask the city council to rectify this situation and that the council amend resolution 09-333 to require council consent for any military equipment the city attempts to acquire.

101 thoughts on “My View: Appalling Lack of Sensitivity to Community Values with Police Vehicle”