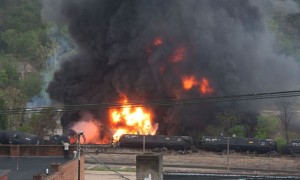 The Sacramento Bee this morning is reporting that a draft letter released by SACOG (Sacramento Area Council of Governments) claims that Benicia “is failing to acknowledge the risks of explosions and fires that could happen if the Bay Area city approves Valero’s plan to run crude oil trains through Northern California to its refinery.”

In June, Benicia’s EIR downplayed the risk of accident, concluding, “The risk of an accidental release of crude oil from a train traveling from Roseville to Benicia is considered insignificant.”

The report finds most critically, “Although the consequences of a release are potentially severe, the likelihood of such a release is very low.” They find, “The probability of an accidental release of crude oil from a tank car traveling to the Refinery involving more than 100 gallons of crude oil is just 0.009 per year.”

SACOG, the Bee reports, believes that the finding is “fundamentally flawed: and “points out that the federal government issued an emergency order in May saying new volatile crude oil shipments are an ‘imminent hazard’ along rail lines.”

The Bee reports that Kirk Trost, an attorney for SACOG said, “I don’t know how you can conclude there is not a significant hazard. The (environmental report) never looks at the risk of fire and explosion in one of these situations.”

According to the Bee, the letter, which “has not yet been endorsed by the SACOG, but was written by SACOG staff in consultation with regional leaders,” urges “Benicia to redo its analysis and provide a clearer picture of the risks the project imposes on up-rail cities. It also says the project, proposed by Valero Refining Co., should not be approved without new funding to train firefighters to deal with oil spills and for rail safety improvements. It also calls for limits on the amount of time crude oil tank cars are stopped or stored in cities.”

Mr. Trost told the Bee, “Our view is they should not be stored in any of our communities along the line.”

The Benicia Draft EIR argues, “An extensive body of rules and regulations adopted by FRA [Federal Railroad Administration], PHMSA [Pipeline and Hazardous Materials Safety Administration], and AAR [Association of Railroads] are designed to minimize the risk of an accidental release of crude oil from tank cars.”

While they acknowledge, “There have been a number of recent fires involving Bakken crude oil,” they argue that “the DOT [Department of Transportation], FRA, PHMSA, NTSB [National Transportation Safety Board], and AAR have moved aggressively to identify the causes of those incidents and reduce the risk of similar incidents. The transport of Bakken crude to the Refinery, if any, will be subject to the new, more stringent requirements.”

Furthermore, they find, “The Project would significantly reduce the risk of an accidental release of crude oil from a vessel in San Francisco Bay. If the Project were approved and constructed, the risk of maritime spill would be reduced from 0.0267 (once every 37.5 years) to 0.0048 (once every 208 years).”

“Finally, it bears noting that federal law preempts the ability of state and local governments to regulate rail activity and/or impose any requirements that burden the unrestricted movement of trains in interstate commerce. While the City can identify and disclose the risks posed by rail transport of crude oil, it must rely on the federal authorities to ensure that any such risks are mitigated as appropriate,” they write. This is a similar problem that the city of Davis has encountered attempting to deal with potential risks to the local community.

The report urged former Mayor Joe Krovoza in June to issue a strong statement, “The overall message of the Benicia EIR that not even mitigation is warranted, and that there might be an event every 111 years, defies logic given the national oil rail accidents of the last six months.”

“I am proud our Council has taken a strong stand.  Sacramento and others should act forcefully too with comments to the EIR.  I greatly appreciate our staff, and the SACOG staff, treating this matter as the regional risk that it is,” he stated. “Everyone should understand, that the Valero/Benicia project is likely only the start.  Projects in Santa Maria and up and down the Central Valley have the potential to exponentially expand the risk.”

Senator Lois Wolk represents a good portion of the area impacted by the rail line and has been actively working on legislation to help mitigate risk.

In a statement in June to the Vanguard, she indicated, “The community was wise to demand an EIR for this project.  Now that we have one, I seriously question whether the EIR has adequately evaluated the true risk of an accident or a spill involved with this project.”

She notes, “In the past year there have been six major incidents across North America where rail accidents resulted in millions of gallons of spilled crude oil. Yet the EIR estimates the risk of oil train spills between Roseville and Benicia would be about only once per 111 years?  That defies logic and is a risky assumption based on recent experience.”

She argued, “It only takes one minor mishap to cause a major accident or spill and potentially catastrophic impacts to the heavily populated communities through which these trains will run.”

Senator Wolk adds, “The EIR also highlights that emissions from the increase in rail traffic in the area resulting from this project will have a significant but avoidable effect on the air quality in the Sacramento basin.”

“Given the risk from possible spills and accidents involving this hazardous cargo and the project’s anticipated effect on air quality, I urge the City of Benicia, Valero, and Union Pacific to work with the community to implement extraordinary safety measures to guarantee public safety if this project moves forward.”

She indicated, “In light of this proposal, I am authoring legislation (SB 506) with Senator Jerry Hill to provide funding to help communities like Benicia provide adequate emergency response to accidents and spills involving rail transports of crude oil and other hazardous materials. California needs to keep in step with the significant increase in shipments of these dangerous materials in order to respond to the growing risk to California’s citizens.”

The Bee concludes, “SACOG attorney Trost said the draft letter will be reviewed by the SACOG board later this month. Benicia has set a Sept. 15 deadline for receiving comments and questions to its environmental analysis.”

Last month the Yolo County board of supervisors approved a letter that condemned the Draft EIR, noting, “The DEIR’s risk analysis concluded that a spill would statistically occur every 111 years, but whether a hundred year event is significant or insignificant depends on the magnitude of that event. A catastrophic explosion and spill in a populated area is different from a 100 gallon spill in a shipyard that is quickly cleaned up.”

They added, “Without considering the second half of the risk analysis, the DEIR cannot conclude that the risk of a spill is insignificant.”