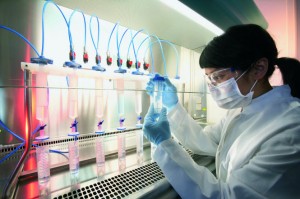 The University of California, Davis, launched 14 commercial startups during the past year to June 30 — the largest number of new ventures based on UC Davis technology to be started in a single year.

This represents an increase from eight startups the preceding fiscal year.

“Nearly doubling the number of university-based startups is a major milestone achieved by the Office of Research, working closely with entrepreneurial faculty,” said Harris Lewin, vice chancellor for research. “This achievement illustrates the huge potential of our faculty for driving economic development, and is in perfect alignment with Chancellor Linda Katehi’s goals for the campus, and the recent emphasis on technology transfer by our new University of California president, Janet Napolitano.”

Of the 21 companies launched over the last two years, most are based in Northern California, with several located in Davis and surrounding areas. Examples include Tule Technologies, 5Plus, Reprovantage, and ViVita. Many are developing solutions that address issues of growing importance such as agricultural water efficiency and human health.

Tule Technologies, for example, is developing a sensor-based monitoring system based on UC Davis technology that allows growers to use water more efficiently when irrigating their fields. Reprovantage, a biotechnology company founded by three UC Davis researchers, is focused on developing diagnostic and treatment applications for a recently identified cause of male infertility discovered at UC Davis.

According to David Earp, chairman of the board of Reprovantage and a successful biotechnology entrepreneur, “It’s terrific to have such a supportive interaction with the UC Davis technology management team. We’re all working toward the goal of seeing UC Davis technology get funded and developed, and the collaborative leadership we’ve experienced in working with UC Davis is key to making that happen.”

The increase in university startups has been cultivated by a unique and collaborative network, enabled by Venture Catalyst, a new unit within the Technology Management and Corporate Relations division of the Office of Research, led by Associate Vice Chancellor for Research Dushyant Pathak. Venture Catalyst works closely with campus and local community resources, including the university’s Child Family
Institute for Innovation and Entrepreneurship and the Engineering Translational Technology Center, to support the translation of university research into commercial applications.

“Unlocking our researchers’ innovative potential has been enhanced by our commitment to working collaboratively across the university and with external entrepreneurial drivers,” said Pathak. “Venture Catalyst represents a unique focus on enabling our researchers to see their technologies make societal and economic impact.” The unit is launching a number of novel programs designed to support the innovative and entrepreneurial drive of UC Davis faculty and inventors.

In total, 62 startups, based on inventions originating at UC Davis, have been formed since 2003, with recent startups resulting in the creation of hundreds of high-value technology jobs in our region.

Recent successful UC Davis startups include Folsom-based SynapSense Corporation, which was founded in 2006 and recently acquired by Panduit. SynapSense develops wireless energy-efficient solutions that improve capacity and reduce energy costs for data centers, which typically consume the majority of energy used in commercial buildings. The company has won several awards for their innovative and green products, including the U.S. Department of Energy’s Innovator award in 2008.

The Technology Management and Corporate Relations division of the UC Davis Office of Research includes Venture Catalyst, the Office of Corporate Relations and InnovationAccess, and is responsible for enabling the infrastructure and relationships necessary to effectively convert research into commercial applications that benefit society. The Office of Research is the primary administrative unit within UC Davis responsible for providing services and resources to all of the university’s faculty, students and staff to support and advance their research. Led by Vice Chancellor for Research Harris Lewin, the Office of Research is a catalyst for advancing the research mission at UC Davis.

Four University of California, Davis, researchers have been given $50,000 each in the inaugural year of a competitive grant program aimed at facilitating the conversion of technology generated from university research into commercial applications.

The new program is offered by Venture Catalyst, a unit within the university’s Technology Management and Corporate Relations division of the Office of Research, as stated above.

“Our goal is to help bridge this gap via programs developed and implemented through Venture Catalyst,” said Dushyant Pathak. “With the STAIR Grant program, we hope to elevate the commercial potential of the remarkable research being conducted at UC Davis so that society can realize its benefits through future commercialization.”

Each of the finalists is provided not only financial help but is paired with industry mentors who have volunteered to help guide the research teams on how to make the often difficult transition from academic research to commercial viability.

The four finalists were selected from a total of 38 applications. That larger group was narrowed down to 14 finalists through a rigorous multistage review process that included internal domain experts as well as external industry members.

The awardees were selected based on their technical merit, commercial potential, and alignment with the STAIR program’s objectives.

One of the awardees, Jared Shaw, associate professor of chemistry at UC Davis, has discovered and is developing a novel class of antibiotics to treat drug-resistant infections, an area of growing concern within the U.S. and abroad.

“I am really grateful that the STAIR program was launched by Venture Catalyst,” Shaw said. “Funding of this type is the missing link necessary for supporting translational research at universities and will be a positive force at UC Davis.”

The funding from this grant will allow Shaw to further develop his discoveries and to generate additional preclinical data needed to support future testing of novel drug candidates.

The STAIR program is one of several programs that Venture Catalyst is developing to support translational research and new venture development at UC Davis. These efforts are beginning to pay dividends, illustrated by the university’s launch of 14 commercial startups during the last year, nearly twice as many as the preceding year and the largest number of new ventures based on UC Davis technology to be started in a single year. Venture Catalyst works closely with campus and local community resources, including the university’s Child Family Institute for Innovation and Entrepreneurship and the Engineering Translational Technology Center, as stated above, to support the conversion of university research into commercial applications.

The Technology Management and Corporate Relations division of the UC Davis Office of Research, to reiterate, includes Venture Catalyst, the Office of Corporate Relations, and InnovationAccess, and, again, is responsible for enabling the infrastructure and relationships necessary to effectively convert research into commercial applications that benefit society. The Office of Research, led by Mr. Lewin, is the primary administrative unit within UC Davis responsible for providing services and resources to all of the university’s faculty, students and staff to support university research and to be the catalyst for advancing the research mission at UC Davis.