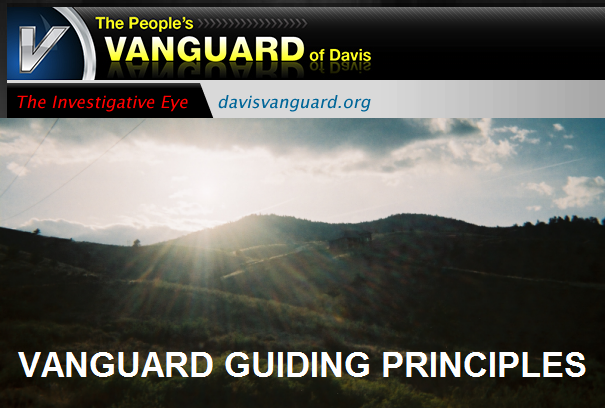 Editor’s Note: The following was originally released in May 2012. It represents the Davis Vanguard‘s first written document embodying our principles and values that guide our work in the Davis Community.  This is part three of our rules that we have developed following a code of conduct for editorial board members, comment policy and now the guiding principles that will appear on the Vanguard’s “about” page when the new site is released September 12, 2014.

The Vanguard is a community-based watchdog and news reporting organization that seeks to cover community debates and other events in a full and thorough manner.  As our audience has grown, we seek to codify our goals and principles underlying our operations.  Our goals are to provide transparency, accountability and fairness to local government, while promoting social justice and democracy, and adhering to principles of accuracy and fairness in our reporting.

Accuracy – Our fundamental goal, whether it is a news story, commentary or investigative piece is the pursuit of truth.  We must do our best to ensure that what we report creates an accurate depiction of reality.  When we do err – which is inevitable – we will do our best to correct the stories and the record in a way that makes sense.  We must rigorously and systematically review our facts and be convinced of their accuracy prior to reporting them to the public.

Fairness – The Vanguard‘s overriding goal is for all involved to believe our coverage was tough, but ultimately fair.  We eschew conventional notions of false balance – adding statements that do not add to the reader’s understanding of the story for the sake of balance.  We also eschew the notion that balance equals accuracy.  Sometimes fair and balanced is actually less accurate.  Instead, we view our primary job with respect to fairness is to accurately depict the competing positions, make reasonable efforts to gather responses to those who are the subjects of criticism, unfavorable allegations or other negative assertions in our stories.  Whatever is quoted or interpreted should be as faithful to the intended meaning as possible.  Our goal is not to please those whom we report on or to produce stories that create the appearance of balance, but to seek the truth and hold those who are in power accountable for their decisions in ways that are tough but ultimately accurate.

Independence – Our primary allegiance is to the public good, open government and transparency.  As such, we do not endorse candidates as an organization, on our pages, or among our principals.  The Vanguard is a donor-based organization – as such we take monetary donations and advertising from people and businesses in the community much as commercial enterprises rely on subscribers and advertising for their revenue.  Under no circumstance do we skew our reports in order to gain advertisers or sponsors.  Decisions about what we cover and how we do our work are made by the principals involved in the Vanguard and not by those who provide the Vanguard with financial support.

Impartiality – The Vanguard is primarily a watchdog organization that, through its reporting, supports open government, transparency and social justice.  The Vanguard frequently takes active positions on issues in this community.  While we take active positions on the issues of the day, we have and maintain an open submission policy, whereby any party is welcome to submit an editorial/op-ed in response to an article or to raise an issue in general with the public.  When we receive an op-ed on issues with multiple opinions, we will attempt to seek out an op-ed from the other side.

Transparency – The Vanguard operates in an open and transparent manner.  We will attribute information we receive from others, making it clear to our audience when the information is derived from other sources and when the Vanguard learns that information firsthand.  Sources of information should be appropriately attributed.   In order to report stories that promote transparency and open government, and expose corruption or wrongdoing, it becomes necessary to use information from anonymous sources.  We must determine to our satisfaction whether the source is credible and reliable, and whether there is objective justification for using the source’s information without attribution.

Accountability – The Vanguard takes full accountability and responsibility for what we report and we are ready and willing to answer for it.  Reader feedback is a critical part of that accountability.  We have an open process for submitting comments that includes required registration.  Users are free to comment and express any opinion they wish to, so long as they avoid the use of profanity and avoid making unnecessary personal attacks.  The Vanguard will never edit or remove a comment for content, criticism, or disagreement with a stated position.

The Vanguard will correct any factual errors that occur during the course of its reporting.  That may take the form of an in-text edit or a retraction depending on the severity of the mistake.  Egregious errors will demand a separate article or rebuttal.  Smaller errors may be corrected without notation.  It is important to note that factual errors are by definition errors in describing the facts of situation – for instance reporting that Joe Doe said something, when in fact he said the opposite.  These need to be corrected.  Those differ from differences of opinion.

Transparency and Open Government go hand in hand.  The Vanguard believes that in order for citizens to monitor their government, they must know what their government is doing.  We view this principle as showing the public what public officials have done and allowing citizens and the media to have full access to scrutinize the actions of government.  The Vanguard voraciously guards these values and makes frequent use of the Public Records Act (PRA) and other acts that require public disclosure to ensure that the citizens know what its government has done even when the lights and camera have been turned off.

Along with transparency in government, the Vanguard seeks its own transparency through a disclosure of its donors.  Donors for 2011 shall be immediately available.  On an ongoing basis, the Vanguard will provide quarterly updates.  All requests must be in writing to: P.O. Box 4715, Davis, CA 95616.  Requests must be made by actual, verifiable persons using their full legal names.  Notwithstanding this policy, the Vanguard reserves the right to redact names upon request of the donor.

Democracy – The Vanguard believes that the process of government is more important than its outcome.  This principle means ensuring that government bodies adhere to proper democratic process and allow for the citizens to voice dissent.  Moreover, it means ensuring that all actions are taken in the open and are above the board, that the process allows the dissenters to have their say, and allows the minority members in a governmental body to have an equitable but proportionate say in the matter.

In the realm of criminal justice, we believe in the due process of law, the rights of the accused, and the federal and state constitution.  We believe every individual is entitled to a fair trial, quality legal representation, an impartial judge, and a trial before the jury of one’s peers.  We question local decisions and state and federal laws and case law that would deprive individuals of these rights.

Finally, we view government and government actors with fair but passionate skepticism.  We believe in the need to question decisions made and the rules under which they have been made.

Social Justice – Social justice is the view that everyone deserves equal economic, political and social rights and opportunities.  Above all else, the Vanguard stands for the fight for social justice.  In our view, we believe that means that people should express their views without fear of persecution or retribution.  They should enjoy the right to freedom of speech, dissent, press and assembly.  There should be a right to representative democratic institutions that will reflect the will of the majority, while protecting the rights of the minority.  We believe that people of all races, creeds, religions, ethnicities, income, socio-economic and sexual orientation should have access to the same rights and opportunities.  We believe that an injustice to one is an injustice to all.  The Vanguard at its core believe as Martin Luther King, that the arc of the moral universe is long but it bends toward justice and the Vanguard supports that struggle toward freedom, justice and the fight against inequality.