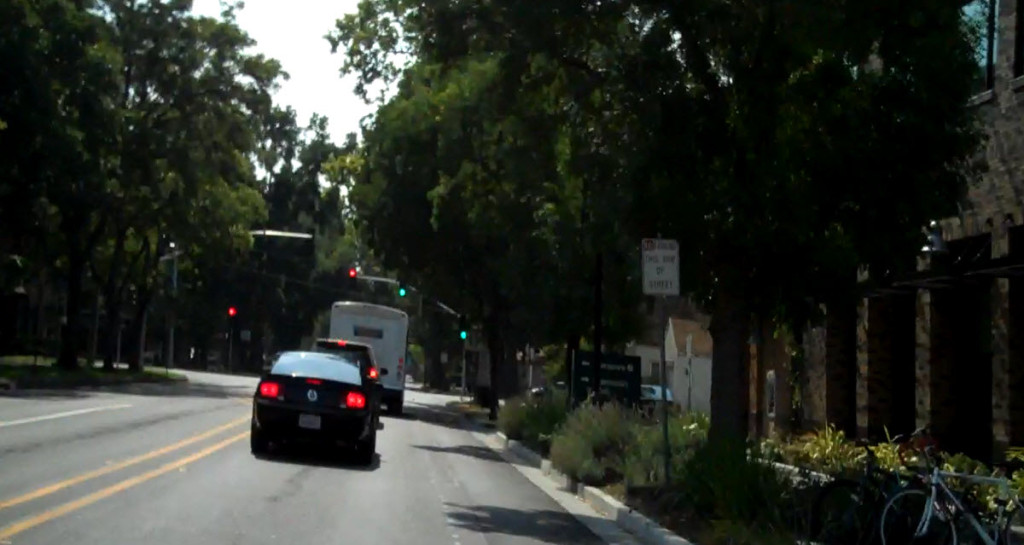 Overall the reaction to the Fifth Street Redesign has been positive, with the caveat that we have not yet seen it in action at peak hours with UC Davis in session. However, there have been some noted concerns and the city will need to address them, either through tweaks or through some sort of educational program.

Last week, in a letter to the editor, a bicyclist raised a number of questions about the new configuration.

Scenario 1: “I am westbound on Fifth Street and I want to make a left turn to southbound B Street at 5:30 a.m. on a Monday. The light will not turn green. I wait three minutes and not one light has changed while I’ve been there. How long do I wait until I run the red light?”

Scenario 2: “I am eastbound on Fifth Street and I want to make a left turn onto K Street at 4:30 p.m. on a Thursday. There are 20 vehicles eastbound that, even though I am signaling for a left turn, will not allow my merge into their lane so I can get to the safety of the center turn lane. How do I complete this left turn safely without blocking other bicyclists in the bike lane?”

Scenario 3: “I am westbound on Fifth Street and I want to make a left turn onto C Street at 8:10 a.m. on a Wednesday. The same situation as my K Street turn is present. How do I complete this left turn safely without having to block other bicyclists in the bike lane?”

Scenario 4: “I am northbound on A Street at 4:10 p.m. on a Tuesday. I want to cross Fifth Street. The only traffic is another bicyclist heading southbound and vehicles east- and westbound on Fifth.”

This triggered a couple of responses. First was a response by a long-time opponent of the redesign, saying, “Fifth Street is a major vehicular artery. As before, bicyclists probably should avoid Fifth Street in downtown Davis.”

The other response was more positive: “I have been [on a] bicycle – commuting between East Davis and the UC Davis campus for 10 years. In the past, I tended to avoid Fifth Street. Now, I am happy to say that the new bike lanes are working great for me. If I need to turn left, I wait for a break in traffic and then move into the turn lane; I am not sure why people think this is a problem.”

The Vanguard spoke to the city’s new Transportation Manager, Brian Mickelson, who also had some thoughts.

For example, “If the traffic signal is not detecting the cyclist, staff advises dismounting the bicycle and using the crosswalk to make the turns.” He noted that the project “is not entirely complete” and that staff continues to work “with the traffic signal design consultant to dial in the sensitivity of the video camera detection in order to better detect both bicyclists and motor vehicles at all signalized intersections as part of the Fifth Street project.”

Therefore, that seems like a temporary problem that the city will ultimately be able to resolve.

The merge issue was addressed by one of the letter writers, but city staff advises, “Continue signaling and scanning until it is safe to enter into the travel lane. If you do not feel safe merging with traffic, you may complete a two-stage turn by riding through the Fifth and K Street intersection and positioning yourself in the northbound lane on K Street. When traffic is clear, proceed north on K Street.”

Indeed, that is how bicyclists have to handle a lot of major streets, and there is nothing that unique about the Fifth Street situation.

Mr. Mickelson offers similar advice on the lack of signal buttons north and southbound. He writes, “As with the other intersections within the project, Fifth [Russell Blvd.] and A Street is equipped with video detection for bicyclists as well as motor vehicles. The original push buttons at this intersection for bicycles are now obsolete and were removed.”

He again asks for patience, “Again, please bear with us while we dial in the sensitivity of the cameras to better detect all road users and thank you for your patience. “

Given that the city accomplished these changes on the fly with minimal disruption to the traffic, I think it is understandable that there are some tweaks that need to be made – but none of the issues raised supports the view that bicyclists do not belong on Fifth Street.

As Darell Dickey noted in response, “After the redesign, Fifth Street is now a major transportation artery instead of just a motor vehicle artery. After the improvements, very little about that stretch of road is ‘as before.’ It is time to embrace the benefits of the new design – including the cyclists – and realize that each cyclist represents an extra automobile that is NOT driving down the corridor causing pollution, congestion and decreased safety.”

Elaine Roberts Musser, in a comment, added, “It is my understanding that glitches in the timing of the traffic signals still needs to be worked out. But I am glad this article and the comment section are pointing out some fine-tuning that still needs to be done on the 5th St redesign. In general, it is working extremely well, but there is no doubt there is always room for improvement.”

In another comment, she noted, “I agree the 5th St redesign makes it so much better for bicyclists and pedestrians. As a driver, I feel safer because it clearly delineates where bicyclists are supposed to be, and forces traffic to slow down because of the single narrower lane. However, if there are ways to improve it, I think the city should be open to suggestions.”

That seems consistent with the comments from the city.

101 thoughts on “Are There Still Bicycle Concerns on Fifth Street?”