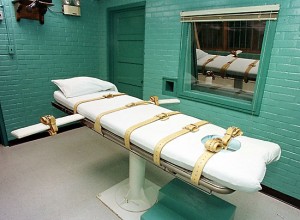 “A North Carolina death row inmate exonerated by DNA evidence on Tuesday was once held up by Supreme Court Justice Antonin Scalia as an example of someone who deserved to die,” reported the Huffington Post this week.

Justice Harry A. Blackmun issued a scathing dissenting opinion when the court declined to review an unrelated death row case out of Texas in 1994, where he broke with his previous views and argued that capital punishment is cruel and unusual, and therefore unconstitutional.

Justice Scalia would write, “For example, the case of an 11-year-old girl raped by four men and then killed by stuffing her panties down her throat.” He would add, “How enviable a quiet death by lethal injection compared with that!”

Justice Scalia referred to Henry Lee McCollum, who at the time had already been on death row for 12 years. On Tuesday, his conviction was overturned when when DNA evidence implicated another man in the case. Mr. McCollum had served 30 years on death row.

The New York Times on Wednesday wrote a scathing editorial, “The Innocent on Death Row.”

They write, “The exoneration of two North Carolina men who spent 30 years in prison — one on death row — provides a textbook example of so much that is broken in the American justice system. And it is further evidence (as though more were needed) that the death penalty is irretrievably flawed as well as immoral.”

The facts of the case are horrifying and horrific. Justice Scalia is correct that this case would be a text book example of justification for the death penalty were it not for the fact that they got the wrong man and therefore it becomes a text book case as to why the system is fatally flawed.

According to the New York Times: “In late September 1983, an 11-year-old girl named Sabrina Buie was found murdered in a soybean field in Robeson County. She had been raped, beaten with sticks and suffocated with her own underwear.

“Within days, police got confessions from two local teenagers, Henry Lee McCollum, 19 at the time, and his half brother, Leon Brown, who was 15. Both were convicted and sentenced to death.”

It turns out both men were innocent. The Times reports that “a state judge ordered both men freed after multiple pieces of evidence, some of which had never been turned over to defense lawyers, proved that neither Mr. McCollum nor Mr. Brown was responsible for the crime.”

DNA was lifted from a cigarette found at the crime scene which matched a man named Roscoe Artis, serving life for a similar murder committed just after this killing.

Writes the New York Times, “Virtually everything about the arrests, confessions, trial and convictions of Mr. McCollum and Mr. Brown was polluted by official error and misconduct.”

This is a classic case – the police caught the wrong people, teenagers, whom they coerced into false confessions. The police and prosecutors failed to turn over exculpatory evidence.

No physical evidence linked either man to the scene, so the false confessions were the sole evidence that prosecutors had.

The New York Times notes that those were “given under duress” and “both men’s confessions were handwritten by police after hours of intense questioning without a lawyer or parent present. Neither was recorded, and both men have maintained their innocence ever since.”

Moreover, as we have seen in many cases, had the police conducted a real investigation, they would have caught the real killer at the start and maybe would have prevented the later killing.

The Times writes, “Equally disturbing, Mr. Artis was a suspect from the start. Three days before the murder trial began, police requested that a fingerprint from the crime scene be tested for a match with Mr. Artis, who had a long history of sexual assaults against women. The test was never done, and prosecutors never revealed the request to the defense.

“It was not until 2011 that the North Carolina Innocence Inquiry Commission, an independent state agency that had taken on the men’s case, discovered the old fingerprint request. The commission also found that multiple statements in the two confessions were inconsistent with each other and with the facts of the crime. In July, the commission finally got the full case file and matched the DNA to Mr. Artis,” the Times writes.

The Times adds, “None of these pieces mattered to the prosecution in 1984. The prosecutor on the case, Joe Freeman Britt, was listed in the Guinness Book of World Records as the ‘deadliest prosecutor’ for the nearly 50 death sentences he won during his tenure. Almost all have since been overturned.”

The post mortem is not particularly encouraging either: “Mr. McCollum and Mr. Brown, who are now middle-aged, have a hard road ahead. In addition to the difficulties of adapting to life after three decades behind bars, both are intellectually disabled. (Since their conviction, the Supreme Court has banned the death penalty for both juveniles and those with intellectual disabilities.)”

The Times writes, “Cases of capital prosecutions based on flimsy evidence or marred by prosecutorial misconduct, not to mention racial bias, are distressingly common. Yet, even as death-penalty supporters insist that only guilty people are sent to their death, it is now clear that Justice Scalia was prepared 20 years ago to allow the execution of a man who, it turns out, was innocent.

“How many more remain on death row today? Can the American people be assured that none will be killed by the state? For this reason alone, the death penalty must end.”

6 thoughts on “Commentary: Are there Innocent People on Death Row?”