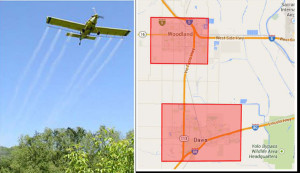 The Davis community spent about a half hour overwhelmingly expressing their concerns about the aerial spraying for West Nile virus, the impact of the spraying, its effectiveness and need, as well as the impact on the environment and the native insect population.

Councilmember Brett Lee stated, “I think there is a reasonable concern about the agents that are used… I don’t think you can make a blanket statement that these are safe, these will not cause harmful effects to the residents of Davis.”

The response from Chris Barker, the Davis representative to the vector control agency was, “I wouldn’t dismiss concerns about harmful effects. I just don’t think there is any evidence to show that they have caused autism, for example. I think the study authors would agree with that assessment.”

Councilmember Lee saw this as an effort to work together to help improve the situation. The subcommittee would be Brett Lee and Robb Davis and would report back to the council and the community.

Robb Davis said he saw this as a way “to improve local efforts at vector control, I think that’s really the intent. Find ways to do that at a community based level. I think that’s a good thing.”

Mayor Dan Wolk thanked the public for “the absolute valid concerns that were brought to us.” He added, “I definitely share those concerns.”

Mayor Wolk also addressed concerns expressed by members of the public who commented that the council truncated public comments down to two minutes and did not have a parallel presentation by those in the community with expertise and alternative views.

Mayor Wolk stated that unfortunately these are the limitations of having this discussion at the council level. “I do think if we have a future discussion on this, I think maybe more of a workshop format or even if it’s a community discussion about it, it would be helpful.”

The city council would adopt the discussion unanimously.

Watch the video below for the public comments on this topic: