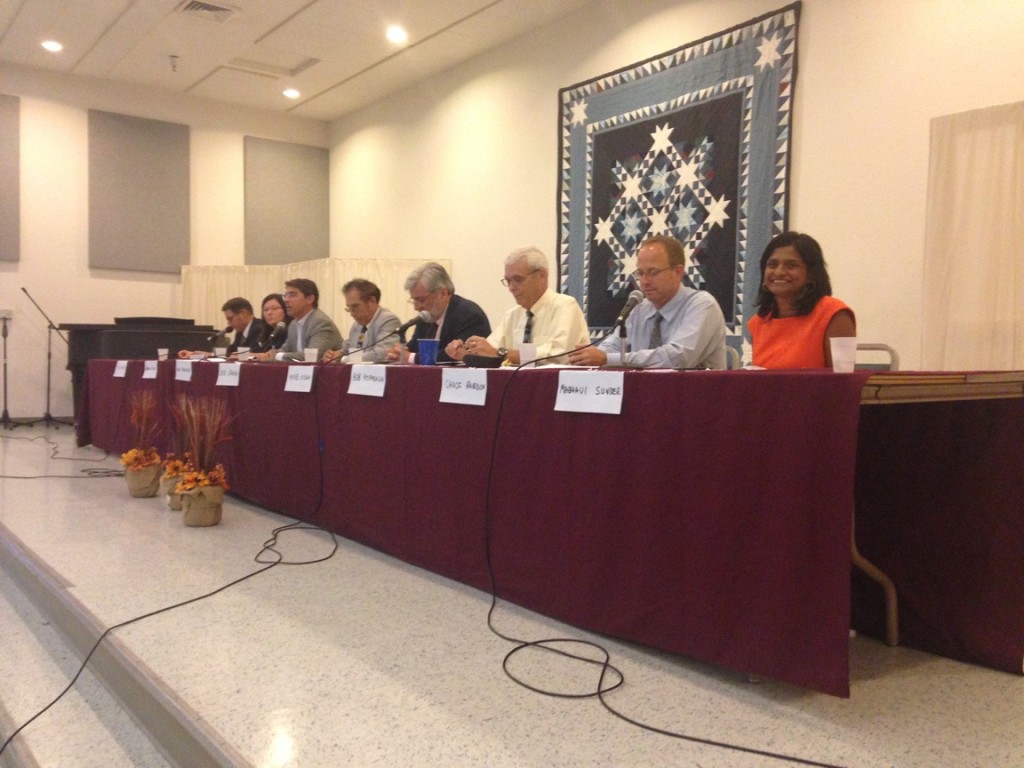 We are rolling out more of the responses from Wednesday’s forum. We apologize for the delay, but the site transfer along with the length of the candidate’s forum has made this a much slower process than preferable.

Question 4: How would you, as a Trustee, ensure openness and transparency in School Board deliberations and decisions?

Bob Poppenga: “I think it goes back to developing a community-wide process for being able to openly and transparently discuss issues that are important to the community, I think that’s going to be critical to avoid conflicts and divisiveness as we move forward.” He noted the difficulty of finding things on the district website: “There’s a lot of information there but you can’t type in conflict of interest and come up with a whole lot of information – so it takes a lot of effort.” He added that he wanted to see information-only meetings bringing experts to speak to issues.

Chuck Rairdan: The district needs a clear plan of where it’s going. “I think the strategic plan was a positive step in that direction. It provided some kind of framework for the programs that the district wants to seek with a tentative timeline and the long view.” He added, “Make sure there’s a plan for getting that word out and letting the community know… what’s going to be involved and what’s going to be discussed.”

Madhavi Sunder: “This is the first time that I’ve campaigned, and I must say I’m awed by the political process of campaigning,” she stated. She noted that this process requires her to go out into the community, have one’s ear to the ground and listen. “One of the things that I have been doing is I’m doing a schools tour, I’m visiting each of our school sites,” she said. “I’ve visited 17 of the 20 schools. I think this is really important to be accessible, and to have conversations with people if we want to talk about transparency. Because transparency is about building trust.” She would add, “I think we have transparency by having conversations so that people don’t just think these things are coming from above without the output of the community and the people in the schools.”

Tom Adams: “My experience as an executive director and on a state level board is that openness and transparency is easy to be done with notifications. You can fulfill the law quite easily.” He said, “If you’re really about openness and transparency it’s about anticipating what are the issues out there. You have to do long range planning. You have to do a year-long agenda and know which months the issues are going to be coming before you and how you can anticipate the discussion on that.” He added, “Then you can actually strategically start reaching out to the community to those people who are not engaged, and not just waiting for them to come to the meeting itself, right, how many people can give up an evening like this. We have to reach out to them.”

Barbara Archer: She noted that DMA does provide the community with meetings and that is a nice service to keep the community informed. There are also closed door meetings governed by the Ed Code and the Brown Act, so there’s that piece of it that we have to be aware of. “We need to make openness and transparency a top priority to rebuild community trust. As such, we need to give the community adequate notice for community feedback.” She referenced a strategic planning meeting that was only noticed in the paper two hours in advance and advocated for calendaring things with enough notice “because everybody’s busy.” Accessibility of school board members is crucial as well – “being able to discuss rationale for decisions.”

Alan Fernandes: He noted that, as a trustee, he has made himself accessible to the community and urged his future colleagues to have regular and open office hours. He said transparency is important and “one of the ways to achieve that is through long-range planning. That gives the public a heads up on where we’re going.” It’s “easy to take issue with hirings for administration for a public information yet criticize the district for not having a better website – which I agree, the website is terrible.” He added, “We have to be fair as to what time we just went through with the recession. We went through an enormous time of constriction and now we’re going to have to rebuild.”

Jose Granda: “The openness that we have right now is you get to a board meeting and you have three minutes to do anything you want to, and it’s basically useless when they’ve already decided what they want to do.” He said, “I would like to change that” by “getting down the level of the schools.”   That’s the way to find out what the parents and students are thinking, “and if you’re accessible that way you don’t need the three minutes, you can talk to me all day.”

Mike Nolan: He related a story from a parent who noted that there was a school board meeting on a Sunday morning at 8 am during a three-day weekend. It was at the School District and they were to discuss closing one of the schools. He said about a dozen went down and attended that meeting – “I felt the lack of transparency very clearly then. I will not allow that to happen.”

Audience Question: If elected as a school board member, what would you personally do to support LGBT students, parents/ guardians and employees?

Madhavi Sunder: “We begin with the philosophy of supporting all students,” she said. “I heard from the kids (in the class at Emerson Junior High) about the struggles of LGBT students in junior high and how these kids are learning to support each other to stand up to create cultures of inclusion.” She also noted the work of Gloria Partida with the Davis Phoenix Coalition who launched a program, “Hate is Not a Davis value.”

Tom Adams: He worked in the Department of Education to help pass AB 48, the Fair Schooling Act. On LGBT students: “First we always have to guarantee their safety in the schools.” The next step is “they have to actually see themselves in curriculum.”

Barbara Archer: The key is student forums to bring awareness. The district started educating students with regards to transgendered students. “I have been really happy to see in my own experience at junior highs that a number of students could come out and be welcomed and supported,” she said, not minimizing the potential for the opposite situation occurring. “We need to be sure that all our students are included and everyone is respected.”

Alan Fernandes: “We have to exhibit a culture of acceptance here and it’s looking… at the leaders within our community, not only political leaders but pioneers… not only LGBT, but there are other communities within our schools that need this kind of acceptance.” He noted race, mixed-race, and others. “We really need to be focused on a culture of inclusion in our district,” he stated, not just in assemblies but also in the normal school day.

Jose Granda: “I believe that everybody deserves to be treated the same,” he said, not differently or anything special. “Zero tolerance for bullying.”

Robert Poppenga: “A positive school climate is critical,” he said. “In reading about school climate issues, they need to be student driven. Those tend to be more successful than if it tends to a more top down approach to school climate.” The school district really needs to focus on restorative justice programs, which he says “have shown great promise in terms of improving relationships among students and seeing different things from different perspectives.”

Chuck Rairdan: He said, in addition to fostering a more inclusive school climate, “building a sense of solidarity among the students so that students can intervene on behalf of other students who are being mistreated.” From there, he added, “there should be a step-wise approach along the lines of the restorative justice.” Counseling and a combination of restorative justice, “at some point you have to toe the line.” With time, he said, these isolated incidents get rooted out.

Audience Question: Would you support a later start time for Davis High School, given that the American Academy of Pediatrics recommends it?

Tom Adams: Yes, he would support (later start times). But he said, “I’m not going to flip the switch tomorrow.” He said, “I would support the efforts there, it seems to be a reasonable thing.” He sees this as putting kids first by giving them the sleep that they need.

Barbara Archer: “Yes, more sleep is good,” she said. “The American Academy of Pediatrics does not make recommendations lightly, there is solid science on this issue. I see no reason why we can’t adjust our schedule slightly because the benefits could be amazing for our students and we must be student-focused.” The research showed a decrease in depression and traffic accidents, and an increase in academic performance.

Jose Granda: “I am going to take a cautious approach to this.” Starting later and extending the day later into the day, may not be a bad idea. “We don’t want to short-change the students on the time that they need to learn,” he said. “But starting later may not be an issue.”

Mike Nolan: “I would take a cautious approach only because, while I respect the opinion of starting school early, under the present circumstance if you don’t think your child is awake in the first period, don’t take a first period. You can always take a child to school for a second period.” He said in junior high and high school, you can do that already. He noted that the district is under strict guidelines on the number of minutes for the school day.

Bob Poppenga: “I personally think it’s a no-brainer. If there’s one thing that can be done where there’s overwhelming evidence of a positive effect, this is it.”

Chuck Rairdan: “I would agree in terms of the 7 through 12,” he said. Not just because of physiology, but they are able to get to school on their own means.

Madhavi Sunder: “As the American Academy of Pediatrics says, this is a pressing public health issue. We have to take this seriously, the well-being of the children is our primary concern.” She asked for a task force to look into this to see how we can make this happen and focus on the how and not rejecting it outright.