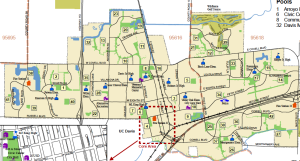 For the past several weeks, I have been reading about concerns that people have regarding city greenbelts and whether the development at Paso Fino will set a precedent for the city – which currently lacks a policy on the sale of greenbelts – to sell off greenbelts for development.

While it is an interesting question to ponder, it seems that the Paso Fino subdivision has some unique characteristics which may mean that whatever the city decides to do is seen as merely unique to that development.

Mike Webb, the city’s Director of Community Development, told the Vanguard that the greenbelt here is “not the typical greenbelt configuration” that the public would ordinarily envision as a long, city-maintained stretch of grass and vegetation that people can walk or bike through.

Whatever the council ultimately decides to do about Paso Fino, there seems a far greater threat to what we might call “the Davis Way” – that embodies design concepts of open space, a network of greenbelts and parks – and that is the city’s budget crisis.

As we have explained a number of times, the city of Davis, in late 2013, saw a $5 million structural deficit open up. This was based on a number of factors – increased costs for employee compensation such as health care and pensions, decreases in the projected savings in the MOU, and infrastructure demands, among other things.

By 2018, that $5 million deficit was projected to increase to about $8 million as water rates take full effect and further increases to compensation levels take effect as projected.

The voters in June approved a six year stop-gap sales tax measure that closed most of the deficit or at least the current deficit. We still need to be mindful of 2018.

But that is only part of the story. As our regular readers know, we have additional problems. We have hundreds of millions of dollars that we owe in deferred maintenance on roads, bike paths and sidewalks. We have uncalculated millions that we may owe on parks. There are potentially millions for pools and other infrastructure as well.

We have also laid out the funding potential. One is through cuts. A second is short-term, through a parcel tax. And a third is longer term, through economic development.

The other thing that we have learned this week, as we analyzed the recent polling – most of the public seems unaware of just how precarious the city budget is right now. About one-third of those who responded to the Godbe Poll believes that the city finances are in good or excellent shape, and another 35 percent believes they are in fair shape.

Those numbers are troubling when we are looking at millions in structural deficits and hundreds of millions in deferred maintenance costs.

The roads are in bad enough condition that the city would like to continue diverting $4 to $5 million in general fund monies to shore them up. Those are monies that will have to come from other places – city services, amenities.

It is probably an extreme case scenario where the city would start closing and potentially selling off parks and greenbelts to produce one-time revenue, and also decrease water and maintenance costs, but it is not inconceivable.

After all, at some point the city is going to have trouble further tightening employee compensation. The city would start looking at ways to outsource some services to save on compensation costs and benefits in particular, but with aging parks infrastructure and the increased costs of water, plus the potential for revenue generation, the city will increasingly be tempted to sell some of its assets to stay solvent.

The city’s policies on peripheral land development have already increased the demand for densification and infill.

One way to alleviate the ultimate pressure on the system, aside from a short-term parcel tax that will free up general fund monies to continue to provide high levels of city services, will be the passage of innovation parks on the periphery that will general large amounts of money over time. First would be the one-time but very large potential revenue from construction, and, second, the ongoing property tax and sales tax revenue that would be generated by those sites.

By opening up 200, 400, and potentially more acreage on the periphery or at Nishi, if the voters support those actions, the city would reduce the pressures internally to generate revenue through the potential sell off of public lands or contraction of city services. It is probably more likely – at least at first – that the city would simply stop maintaining greenbelts and close parks rather than sell them off. But the longer they lie in disuse, the greater the pressure will mount to do something with them.

We need to be clear that all of these proposals are in the early stages, but the basic problem is very clear – the city is not generating enough revenue right now to support our high level of demand on city services and if the voters are unwilling to support new taxes or unwilling to support peripheral economic development, the city will have to look very closely at other ways to generate revenue or cut costs.

This may ultimately prove to be a far greater threat to “the Davis way.” The city needs to remain solvent and something is going to have to give. It is up to the community now to decide what Davis is going to look like in the future.