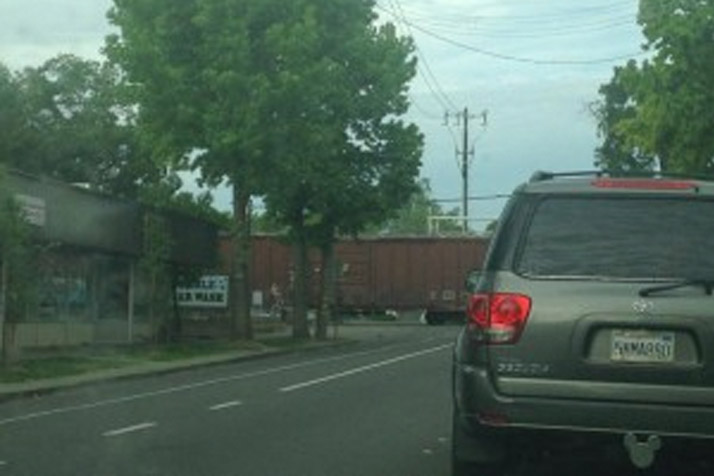 In his weekly column last Thursday, City of Davis Chief Innovation Officer Rob White discussed the issue of the grant that will be awarded “for the first tangible step in many years on the Yolo Freight Rail Relocation project.”

In it he noted that the grant from the EDA (Economic Development Administration) will allow the cities of Davis, West Sacramento and Woodland, Yolo County and the Sacramento Area Flood Control Agency (SAFCA), which all came together for the first time, to address issues including: 1) flood control (primarily in Woodland and east Davis); 2) removal of at-grade crossings in Davis, West Sacramento and Woodland; and 3) relocation of the 2nd Street switching yard in Davis.

For me there are several key issues involving the city of Davis, but a lot of it involves the fact that what worked for the city fifty years ago, when the rail line was on the edge of town rather than running through the middle of town, does not work now.

Last spring, I highlighted the problem that exists in Davis, given the switching yard location and the at-grade crossings that can block Third, Fourth, Fifth, and Eighth Streets for long periods of time as the rail cars simply stop, bisecting portions of old East Davis from the Davis Downtown.

How do we have a modern city that wishes to be a leader of innovation in the 21st Century, when trains stop on the tracks, effectively cutting off main east-west travel connectors?

The second reason to do this is that the rail line is taking up valuable land in the core of Davis that could go toward some redevelopment efforts, both of the land and perhaps in conjunction with surrounding properties.

Writes Rob White, “Davis is taking the lead on the economic development studies because we have the most to gain from a realignment of the north-south tracks out of our downtown.”

The study will focus on the opportunities for economic growth related to increased rail access for agribusiness and industry, redevelopment of urban corridors presently impacted by rail lines, and new sustainable employment.

“This is very exciting as our Yolo County communities work together for the betterment of our region,” stated Davis Mayor Dan Wolk. “It enables us to assess the potential economic benefits and redevelopment opportunities that might result from the removal of the rail barriers currently dividing our cities and downtowns. The grant will also allow us to more thoroughly assess impacts from flooding that might be addressed through rail line relocation in several parts of Yolo County. Pursuing a comprehensive analysis of the enhanced economic opportunities that rail realignment may offer will allow us to create solutions that will better our Yolo cities and our region.”

“This EDA technical assistance grant will allow Davis, West Sacramento, Woodland and Yolo County to move forward with a project that has the potential to generate significant economic development and jobs and provide numerous other benefits, including increased public safety and flood protection,” said Congressman John Garamendi. “This project is a great example of regional cooperation – several government entities coming together to tackle a large economic development project that has the potential to lift the economic prospects of the entire county. I commend city and county officials on securing these funds. I look forward to continuing to partner with them as we build a regional economy that creates opportunities for hardworking Yolo County residents.”

There is a bit of pushback coming from the community. There seem to be three issues that we should address.

First, the north-south rail line is not the point of safety concerns that the oil trains that are moving east-west represent. Given the concerns about oil transportation risks, some believe that the city of Davis should be focused on getting a grant and study to divert the east-west hazardous and flammable cargo that runs through Davis.

Rob White addressed some of these issues, noting it was ironic because the location on the rail line “was a primary driver in the founding of Davis(ville).”

For him, the short answer “is that the east-west line now serves both commuter and freight rail needs, and there is currently no financial driver that would help pay for that (expensive) relocation. Whereas discussions on the north-south line have seen early indications of willingness for relocation, and the financial drivers that would reasonably pay for the project (without requiring the cities or the county to carry the burden) have become aligned.”

Second, that leads us to the cost consideration, which Rob White does not specify but does mention: “These financial drivers are borne by significant flood control improvements, new connections for commerce for our county’s industrial areas and better rail service to our region’s ag industries and food processing.”

But, more importantly, the project produces “collaboration of the five major public agencies and we have willing railroad operators and landowners in the discussion.” He poses the better question to be, “Why wouldn’t we want to assess this opportunity?”

The key here, of course, is “assess.” While it can sometimes become a synonym for “do,” in this case, assessing will address both the costs and benefits of doing.

Finally, and I’m a little disappointed that Rob White did not lay this out more explicitly, there are two huge benefits for Davis – one is not bisecting the city with trains that block traffic, and the other is opening up the area to economic development in the downtown.

It would be helpful to see how much acreage we are talking about, and what can be done in terms of economic development – yes, it is preliminary, but giving the community a vision of the possible might get some excited about the prospects.

My final point here is that this is an early step and we need vigorous discussion about the upsides and downsides to moving the north-south rail out of town.