The city has finally released the telephone survey results from Godbe Research which was conducted from June 11 to June 16, 2014. Godbe surveyed 504 Davis registered voters, with a 20-minute survey conducted in consultation with city staff.

Much has been made out of the polling on the parcel taxes, which continues to inform current and future city strategy on the timing and amount of the city’s parcel tax policy.

However, there is new information that we wish to focus on. The general level of citizen satisfaction remains high, but it has slipped since the city last conducted such a poll back in 2007. In 2007, 93.7% reported that they are very satisfied or somewhat satisfied, and now that level is still high – 84% of respondents, but that represents a decrease of 9.6%. Staff writes, “Although the overall level remains high, the decline is likely due in part to the economic downturn that occurred between surveys.”

From our standpoint, however, we will focus on two specific findings.

That has changed, as the Davis Enterprise remains the top plurality but their reach has shrunk by nearly one-third, and now only 34.7% people get their source of information from the Enterprise compared to the Internet/Davis website now reaching 29.5%.

While they do not mention the Vanguard by name, the influence of the Vanguard is seen quite clearly here. Readership even over the summer still reached over 4000 unique views during the week for the Vanguard.

Perhaps the interesting factor is that the Sacramento Bee has a larger readership in Davis than the Enterprise, but the Enterprise is where far more people get their news on the city. Social media has not become a large source for city information.

From a city standpoint, one of the more interesting findings is public perception of the most important issues. The long drawn out water process has pushed the issue of water to the top of the list. What is perhaps interesting is that the respondents seem split on the bigger issue that pertains to water, with quality edging out cost by a 17 to 13 percent margin.

The budget only ranked third on the list at 8.9% which is interesting because the budget and the city’s lack of revenue represent by far the greatest long-term challenge and the next year and a half will see a number of initiatives address the city budget. We have already seen the sales tax, we will also see the parcel tax and perhaps several Measure R votes on innovation parks – Nishi, Mace, and the Davis Innovation Center (Northwest Quadrant).

This dovetails well with our call to arms from the weekend, arguing that the public really lacks the knowledge about the city’s fiscal condition.

The fourth big issue is the lack of affordable housing – an issue that also taps into more traditional growth and development and land use issues.

However, what we have seen in the last seven years is a sea-change in the political landscape in Davis. In 2007, at the time the Vanguard was first starting, we saw traditional issues dominating – growth and development at 34% and lack of affordable housing at 20%.

Those issue have been replaced by water and budgetary concerns. 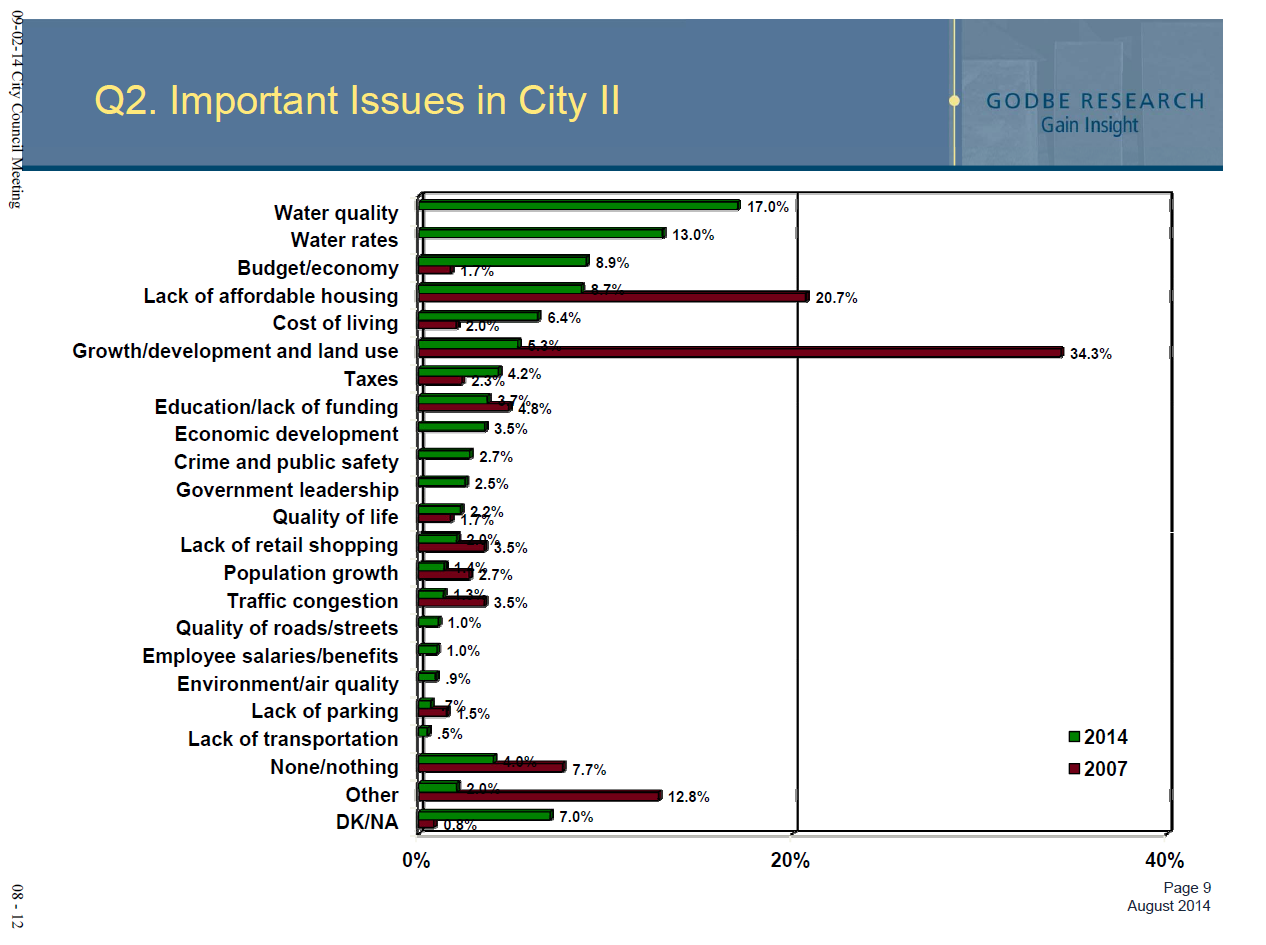 As we drill down, however, we see that while budget and the economy ranks third with 8.9%, there are other related issues that might push it up on the screen – taxes at 4.2%, economic development at 3.5%, roads at 1%, employee salaries and benefits at 1%. These are not enough to push the issue of the budget and economy over water, but it certainly shows it is a considerable concern.

What isn’t a huge concern is crime and public safety at 2.7%, but that issue was not even on the radar of the public in 2007.

The polling, therefore, shows the emergence of new issues replacing growth and development and housing, which dominated seven years ago, but it also shows again the need for public engagement on the budget issues, which represent again the biggest long-term challenge.