As the official applications – first by the Mace Ranch Innovation Center and today by the Davis Innovation Center – come in, we are able to start evaluating the actual proposals rather than the innovation park concepts in general.

One of the critical issues will be density. As anyone familiar with Interland, located south of I-80 off of Research Park Drive, knows, the city at that time did not maximize its density. The result is what, in many people’s view, is an under-utilized research park that contains single-story buildings and large, flat level parking lots.

A huge consideration with regard to density is the best utilization of existing space. The city of Davis is looking at a roughly 216-acre project at Mace Ranch Innovation Center and perhaps a comparably sized project west of Sutter-Davis Hospital. Not only will dense developments mean less encroachment onto existing agricultural land, they will lessen the need to look for additional land after build out.

On the other hand, developers are perhaps rightly concerned about traffic impacts on Mace Blvd., an already congested road that has a junction with I-80. However, the proposed site has access to a good county road and it abuts the railroad tracks, which could allow for some out-of-the-box thinking.

The developers have yet to do a traffic study on their proposal, to see the impacts on existing roads and whether they will be required to mitigate.

In terms of density, the stated goal is: “Achieve a 0.5 FAR [floor area ratio], consistent with the General Plan and previous business park land strategies.”

They will phase “the project over time, which will allow for a strong initial first phase that may be at a lower FAR, but then provide higher density in later phases to create the desired FAR.” They also plan to establish “higher density areas closer to plazas, key open spaces and the transit plaza to encourage a cross-pollenization of ideas and collaboration.”

The Project “will provide for construction of approximately 2.6 million square feet of industrial research office and development space, of which there may be up to 260,000 square feet (10%) of supportive commercial.”

The Project “identifies and incorporates several privately maintained parks and open space areas throughout the site totaling more than 75 acres of green space.” They write, “These areas are easily accessible from all structures and will include greenways, courtyards, commons, orchards and plazas. The greenways and open spaces are anchored by a 5.1 acre recreational park (‘the Oval’) which will be privately maintained but made available for public uses.”

The Center is also bordered by a minimum 150 foot wide greenbelt which “serves as an agricultural buffer but will include planned and natural spaces, a biking and walking trail, allowing scenic views of agricultural lands and the Sacramento skyline. This greenbelt buffer will also serve drainage and water quality purposes.”

In the city’s general plan, under University-Related Research Park which includes “offices and research and development uses (including but not limited to biotechnology) with limited amounts of ancillary light manufacturing, assembly, warehousing and distribution,” the maximum floor area ratio (FAR) is 50 percent (.5).

Their ultimate job: “Prepare recommendation on how, where and whether to pursue construction of a future business/innovation park able to primarily accommodate space needs of growing companies in an innovation plan within or peripheral to existing City boundaries.”

They commissioned Studio 30, headed by Jeff Loux among others, to conduct “research findings including characteristics of successful innovation centers; specific strategies for the City of Davis; and site analysis, sample site plans and land use options for four potential innovation center sites in Davis.”

What they found was that for an Innovation Hub-Center which included “research and development/flex space where more innovation occurs,” the FAR would be 0.3 to 0.5 with an employee density per SF at 250.

However, office and research lab space could be more dense. This would be “Studio space, wet and dry research labs, incubator space, and offices where a large amount of work can be done” at between 0.3 and 1.0 FAR. 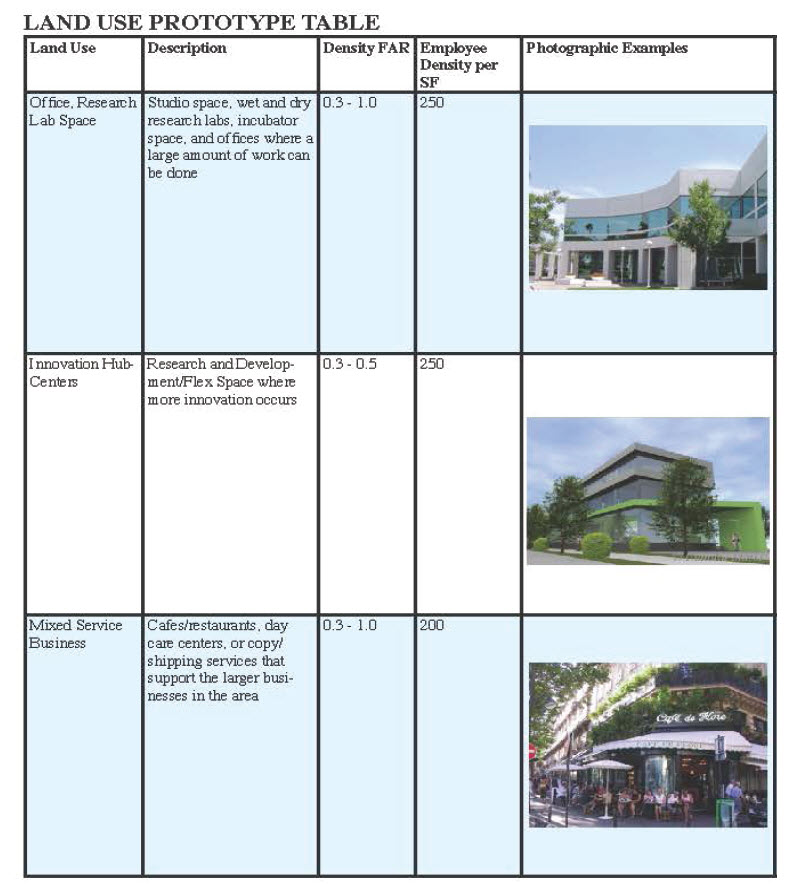 While Mace Ranch Innovation Center pushes toward the maximum 0.5 FAR that is allowable under the General Plan, there are many who wish to see more density. Naturally the city council could override the General Plan limitations – which would be subjected to a public vote anyway through Measure R. The other option would be for the city council to update the general plan as part of this process to allow greater density.

Again, if the city’s goal is to maximize the impact onto agricultural land, then greater density will allow the city to get more bang for its buck with one or two innovation parks. We need to learn from the mistakes in the past, where insufficient density has limited the ability for the city to bring in new businesses and keep startups that have grown beyond their initial needs.

Naturally we need to be mindful of traffic impacts, but both sites have the ability to utilize multiple modes of transportation.

The applicants note that there are four connections, three primary and one secondary, to the existing bordering roadway with access on County Road 32A as well as Mace Blvd.

They also note that the project will link with the “existing pedestrian trails system and a regional bike trail. The Yolo Causeway Bike Path connecting Davis to Sacramento abuts the Project site and will provide excellent nonautomotive access from the project to homes in West Sacramento and other nearby residential communities.”

They add, “The Center is proximate to a Yolo Bus stop from which landscaped pedestrian access will be improved to the site. There is an existing transit stop on Mace Boulevard adjacent to the Project and a transit hub is proposed in the heart of the center to allow for a centralized stop to accommodate all users.”

Thinking more outside the box presents a possibility of a commuter stop for Amtrak passengers as the project will abut the train tracks.

Density will represent one of the critical points of discussion as we move forward.

LEAN MORE ON THURSDAY WHEN The Davis Vanguard hosts an Innovation Park Informational Forum at the DMG Mori Seiki Conference Center located at 3805 Faraday Ave. in Davis, on Thursday, October 16 from 6:30pm to 8:00pm. The forum will be a town hall style discussion with panelists who will answer questions from the community about the potential innovation parks.
Click Here