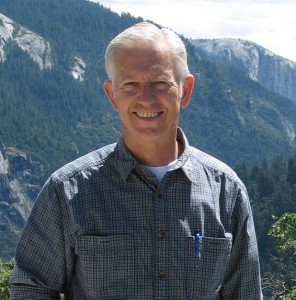 At the next meeting of the Fair Political Practices Commission, John Munn, an unsuccessful Republican candidate to the California State Assembly in 2012, his campaign committee and treasurer, Manny Carbahal, are being assessed a proposed fine for failing to file election cycle reports in a timely manner for contributions received during the 90-day election cycle preceding the 2012 primary and general elections.

According to the report, “It is further stipulated and agreed that Respondents violated the Political Reform Act by failing to timely file election cycle reports in connection with the 2012 primary and general elections, in violation of Section 85309, subdivision (a), of the Government Code (1 count); and by failing to timely file late contribution reports in connection with the 2012 general election, in violation of Section 84203, subdivisions (a) and (b), of the Government Code (1 count).”

“This matter arose from a California Franchise Tax Board (“FTB”) audit for the period from January 1, 2011 through December 31, 2012. During that time period, Respondent Committee reported receiving $132,885 in contributions and making $135,755 in expenditures. Respondent Committee exceeded the $25,000 threshold for online/electronic filing on or about March 17, 2012,” the FPPC reports.

“Respondents failed to timely file election cycle reports for four contributions of $1,000 or more received during the election cycle periods preceding the June 5, 2012 primary election and the November 6, 2012 general election. The contributions received prior to the primary election totaled $18,000 with $1,000 provided by a supporter of Respondent Munn on April 3, 2012, and $17,000 provided by Respondent Munn as a loan to Respondent Committee on May 2, 2012,” the report continues.

Under Section 85309, subdivision (a), the respondents were required to file election cycle reports disclosing any contributions received of $1,000 or more during the election cycle periods preceding the 2012 primary or general elections. 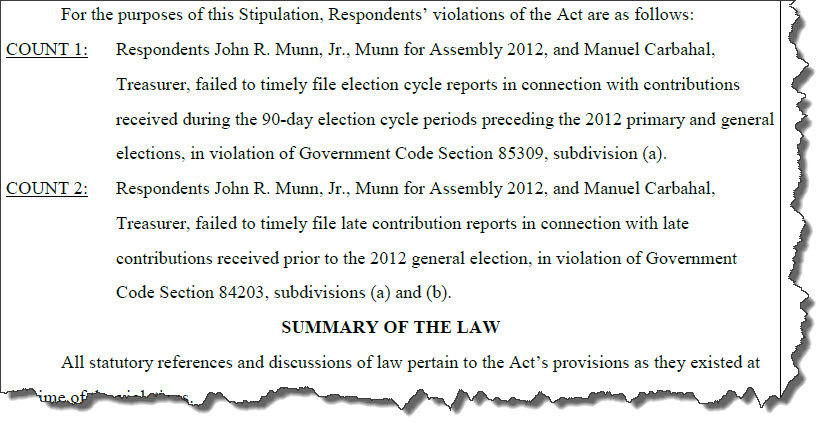 Each count carries a maximum administrative penalty of $5000 per count.

In count 1, they note, Mr. Munn “is an experienced candidate who has run for California Assembly on three previous occasions. Given his prior experience, he knew or at least should have known of his committee’s duty to file election cycle reports.” At the same time, he was the source of “97% of the contributions giving rise to this violation” and he had “no prior history of violating the Act and this was Respondent Treasurer’s first time acting as a campaign treasurer.”

They conclude, “Based on the aforementioned facts, imposition of an administrative penalty in the amount of $2,000 for Count 1 is recommended.”

The FPPC makes similar findings on the second count, as well.

Therefore, the FPPC imposes a recommendation of a $1500 penalty.

For reasons that are not clear, the listed penalty on the stipulation is $3500 but on the agenda itself it lists the penalty at $4000.

In a heavily Democratic district, Mr. Munn would lose to incumber Democrat Mariko Yamada 62.4% to 37.6%.  The district encompasses all or portions of Colusa, Lake, Napa, Solano, Sonoma and Yolo Counties.

In 2014, John Munn, who was a litigant against the city of Davis on the water rates suit that settled this fall, ran unsuccessfully for the Davis City Council. He finished in third place, a few hundred votes behind Rochelle Swanson for second, which would have seated him on the city council.

“All but one of the “late” reports at issue were loans from the candidate (me).  These were all included on the required periodic reports, but we did not realize that candidate loans also needed to be reported as contributions.  There was also a single late report of a supporter contribution.  I can no longer remember the circumstances, but this was probably because I did not get it to my Treasurer soon enough.  The auditor in this case did not think that these were serious violations.  The FPPC staff, however, saw things differently, although the fine was greatly reduced from allowed maximums.   In no case was there any intent by my campaign to hide any contributions.  In addition, this was a relatively low budget campaign compared to many other state office elections, and if one were to look at the expenditure side of the candidate reports, you would find that my campaign provided more detail about how funds were spent rather than lumping them as payments to a consulting firm.

“As for being an “experienced” candidate, eight years had gone by since my most recent previous campaign in 2004, during which time I had not given much thought to political campaigns or their related reporting requirements.  Finally, I knew an audit was on-going, but had not learned of the outcome.  Audits are not unusual and are supposed to be random.  This had absolutely nothing to do with my City Council campaign.”