I am a man of principles and integrity despite the fact my political opponents attempt to put me down for my stands on the issues that are relevant to my two special interest groups, the students and the taxpayers. I have confidence in myself and I stand up for what I believe. For that reason, I will never shy away from an explanation, a civilized public debate and an apology if warranted.

Why late this last year?   I have a disabled daughter (Sara) whose medical bills are over $10,000 a month, I gladly pay huge health insurance premiums, to be able to support her. Last year in July, my brother (Alberto) who is also disabled for whom I am his only support, suffered a fall and originated and unexpected $12,000 additional medical bills. Contrary to the accusations, I managed my personal money very well and gave priority to my family, opening myself to pay much higher property taxes because I paid the County a lot more money as I had to pay interest. This way I covered both of my obligations. I am not complaining nor looking from sympathy from anybody; I am explaining it since the public is interested in my personal finances. Instead of taking the position that this is private, because it is, I am doing it because this is not an issue for the election or has to do with improving Davis schools. It is being used as a personal attack to distract the positive momentum of my campaign.

With a few exceptions, when I explain to people the 3T’s of my campaign, TECHNOLOGY, TAXPAYERS AND TEACHING, I get. “You have my vote”.   This issue is a naked attempt to dampen the momentum and support I have in the community because I am the only candidate that is different, has the right qualifications in education, the only one teaching STEM careers, the only one that stands for fiscal responsibility, the only one that can communicate fluently with 18% of parents and students in this district, the only one that stands for change and is not leading looking sideways. You take your pick of any other three and you will get a repeat of the current school board, nothing will change. For that reason I am asking my supporters to vote ONLY for me as this will increase my chances of winning a seat on the School Board.

Here is my property tax record showing I do not owe back taxes, so that everyone is satisfied. You can pay your taxes later than the deadline, but with interest and if necessary you can get into a payment plan and both of these are OK with the county. I happened to be in the County administration building filing the Form 460 at the time and I just went upstairs in the same building to pay them while I was there. Is there anything wrong with this? 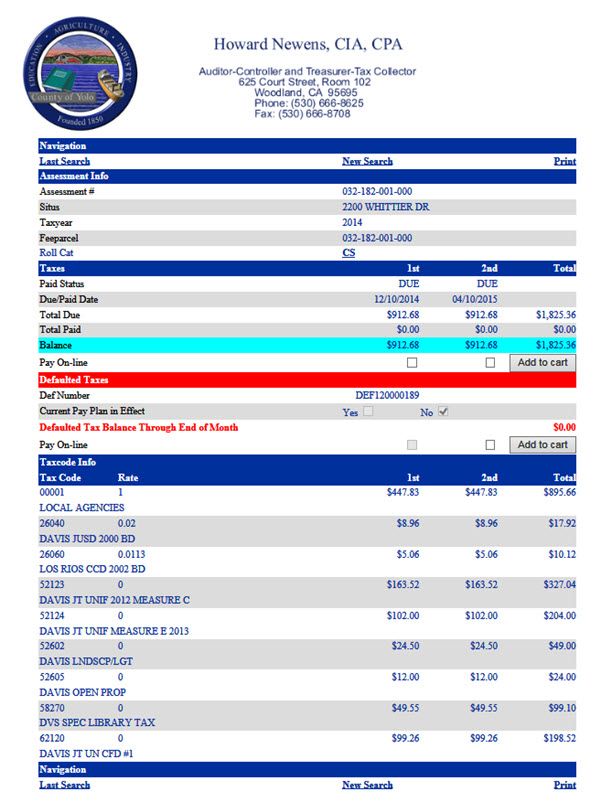 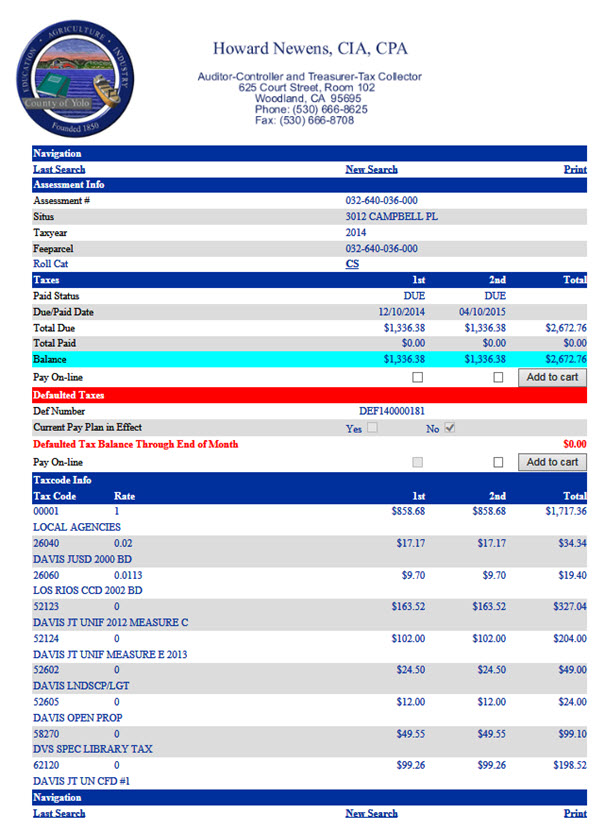 There is a positive aspect of this disclosure because it will motivate your readers to look at their tax bills in detail and see that what I am saying about the School Board treating the taxpayers as an ATM machine is actually true. Take a look at my bill and you will see there are eighth assessments between the School Board and the City of Davis. It is time to reflect on this, examine where the money is going and whether it has had an impact on ALL students or has made a miniscule difference.

I want to address other aspects of the personal attack. Mr. Greenwald says he acted on a tip. In my article “Granda Answers the Peterson Question”, I answered a question the Vanguard had posed to me about the issue of Petersen’s conflict of interest, and it wasn’t an “unprovoked attack on fellow candidates Barbara Archer and Madhavi Sunder.”   What I said about their conflict of interest has been discussed at length in the Vanguard and I believe many understood my message very clear. Conflict of interest is NOT OK even if that comes from Madhavi Sunder. In my article I criticized Freddie Oakley, the County Clerk for endorsing Madhavi Sunder using her position as an elected public official.   As an individual, she has the right to endorse and vote for whoever she wants, but the problem here is that she is the elected official in charge of counting Madhavi Sunders votes and mine. Using the County Clerk’s office, the very official who is supposed to be neutral, to promote one of the candidates is not OK. It questions the integrity of the election results and I am saying it before the election.   Now the fact is that Ms. Oakley is in charge of the County records, with full access to the property tax records, raises the question whether she originated this in retaliation for bringing it up her conflict of interest. Whoever it is please have the courage and honesty to come forward.

Share:
Tags:DJUSDElectionsJose GrandaSchool Board
Previous : Meet-And-Greet With School Board Candidate Madhavi Sunder At Wagstaff Home This Sunday!
Next : What is Missing in Downtown Davis?

25 thoughts on “Granda Answers Attacks From The Vanguard, Discloses Fully His Personal Finances”