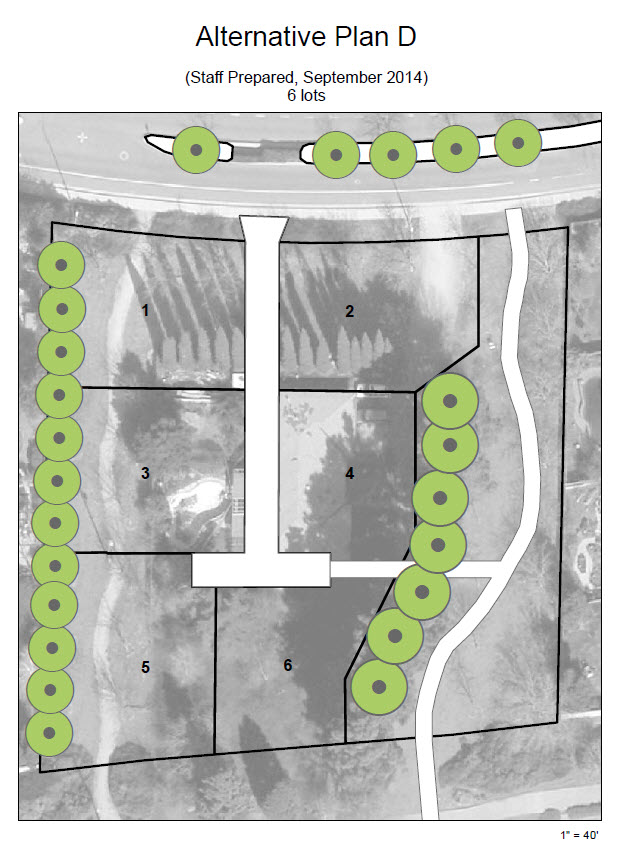 It was a tricky situation for the Davis Planning Commission on Wednesday night. Officially, the only proposal that was on the table was consideration of Plan C-2, a developer-proposed compromise that would leave in place eight units and preserve the eastern greenbelt and the trees.

However, the community, the neighbors and planning commission members were uncomfortable with the plan’s ability to protect the trees by putting them into private hands. As a result, the commission voted 3-2 to ask the developers to consider Plan D which would allow for six homes, despite developer Jason Taormino’s statement that the plan did not work and would not allow the developer to build on three of the lots.

Plan D would preserve the greenbelt, reduce the number of lots from eight to six, and preserve all nine Canary Pine trees in public ownership.

Jason Taormino explained that, following the May 28 planning commission meeting, where Plan B was approved, they were asked if they could keep the fifty-foot buffer on the east side of the development in public ownership, and “C-2 takes care of that,” he explained.

“The question,” he said, “is why are we back here?” He explained that, following the previous commission vote, “we had quite a few unhappy people. I went right out there and said, I know you’re not happy with what happened tonight but I want to continue the conversation,” he added.

They had a series of meetings and showed them some plans that accommodated some of their concerns.

He called Plan D a “great BON (back of the napkin).” He said they had their engineer draw up the parameters to see what it would look like. He explained, “What we see is you can’t build on three lots and one lot would have a house with no yard. It doesn’t work.”

The commission heard roughly 40 minutes of public comment – just about all opposed, it seemed, to Plan C-2. The chair, Rob Hofmann, attempted to preclude the greenbelt issue as an issue that council would have to address, and most of the public comments addressed the trees.

“I have some concerns with C-2 which has those trees inside the property in the backyards,” he explained. He called it a “lose-lose” proposition in the long run. “I can imagine moving into those homes and waking up in the morning and seeing those pines and thinking I’m living in Lake Tahoe and not in Davis, because they’re so beautiful. But I think that someone, after having lived with those pines for awhile, their opinion may change.”

He argued, “Pines and people that close together don’t really mix well.” Both he and the next speaker expressed concerns that the mess from dripping sap would ultimately lead to people wanting to remove the trees.

“It didn’t address the concerns that Plan D does,” she said. She said that, in her ideal world, the developers would take on the 2009 plan – saving all the trees and the greenbelts. “They want to build eight. City staff has put together this great plan that takes our concerns into account. It’s not a perfect plan, but it’s something that we can build on.”

She said that Mr. Taormino wrote an op-ed stating that “many trees were cut down to build our home.” She responded, “I get it. I understand. But here’s an opportunity where we don’t have to cut down any trees. Where we can still preserve the greenbelts, save the trees, and still develop.”

He said that the eastern portion of the greenbelt is currently dark and unkempt “and is not used as a public space at all.” The western portion is what is used more as a traditional greenbelt, “with its designated path and better lighting.” He said he has walked the eastern portion which he says is “intimidating” at night, even with his dog to accompany him.

He said, “If the eastern greenbelt is to be developed to be a more functional public space, it will require more maintenance including providing safer lighting and clean up of the trees.”

Mr. Patrick expressed concerns that, while the eastern buffer will remain in place, those on the west will have the infill right on top of them, with large homes blocking their view of the Canary Pines.

John Coyle on Calder Court stated, “I am not against development, I live in one,” and he supports smart infill projects over re-designating ag land and open space. “But I am also in favor of planned development that preserves to the maximum extent possible a quality of life that the city residents have benefited from with existing greenbelts within and around their developments.”

He said that the best protection of the existing greenbelt is to allow the developer to build on his own land – two homes on the Haussler Property.

Bob Hagedorn was one of the people involved in the negotiations in the 2009 compromise. “It was a compromise,” he said, with the original proposal being five homes and not preserving all of the trees.

The compromise preserved the pines, swapped and enhanced the greenbelt, and “made it a better area than it is currently, and that it was at the time.”

“The plans that we have seen put forward by the developers at this time do not address any of the concerns that we attempted to address in 2009,” he said. “The city staff, I commend them for the plan they put forward, Plan D. (It) addresses or attempts to address what we did in 2009.”

Eileen Samitz, another former planning commissioner, spoke about their creation of infill guidelines to create a process to help the public be involved so that their input can be used by the city.

However, she said, “What we see here is developers are not cooperating and not willing to compromise.” On the other hand, “The neighbors have clearly shown their willingness to compromise. The staff has come up with a perfect compromise and that is alternative D. It solves all the problems and yet the developers continue to demand eight units.”

Developer Dave Taormino responded to a lot of these comments. He stated that, under Plan C-2, “there would be no sale of that greenbelt, that buffer, it would be left exactly the way it is.” The plan also “saves all nine pines.”

On the issue of tree mitigation, he stated that they would leave to city staff to decide where they want trees planted on public property.

“All of these concerns that were raised by the planning commission,” he said, “have been addressed in plan C-2.”

He argued that they have compromised a lot, they eliminated four accessory dwelling units, but they are not willing and not able to compromise on the eight units.

He then addressed the issue of the trees. “You have heard a lot tonight about who is best able to preserve and protect the long term, the pine trees.” He continued, “We have heard from the tree advocates that the government is the best one to protect and preserve these trees.”

Mr. Taormino went into a lengthy presentation that, in three instances in the past, they had made agreements to plant trees, mainly along County Road 29, for mitigation purposes. In each instance, the government, whether it be Yolo County, the state of California or the city of Davis itself, failed to protect the trees and he argued that local groups, non-profits and developers themselves are far more effective at keeping their promises than the government.

Commissioner George Hague said he is sensitive to the concerns of the community about the buffer zone, as well as the nine pine trees. He said, “I learned something about the difficulty in doing business in Davis. But at the end of a very long discussion… the bottom line is that the residents wanted the buffer zone protected. It is protected. They wanted the trees preserved, they are preserved.”

He said eight homes plus a bunch of ADUs “might fit on the lot, but I don’t think that the lifestyle they generate would have been supported by the limitations of the lot.” He said, “I believe the developer has addressed those concerns. There are no more ADUs.”

Cheryl Essex stated that she is supportive of the concern, as long as the public good is retained. “The record of public input is remarkably consistent,” she stated.

She said that development “is supported in this area as long as the public good is retained. We’ve heard that over and over again.” About the public good in this instance, “the citizens are willing to give up some of the greenbelt in order to bring those majestic Canary Island Pine Trees into public ownership. That’s what we’ve been told.”   The city has heard this since 2008, and “it’s been consistent.”

She made the motion that would be adopted on a 3-2 vote to support something like Plan D.  Chair Rob Hofmann joined Merilee Hanson and Cheryl Essex, with George Hague and David Inns in dissent.

Dave Taormino was willing to compromise, “What I’ve heard tonight, it sounds like overwhelmingly, is that you want the trees, or as many of the trees as possible, into public ownership. If that’s the direction you want to go, give me that instruction.”

He said they could go back to the drawing board and, prior to going to the city council, “we’ll come up with as much as possible with the trees on public land. I think I can do that for six trees and maintain the eight dwelling units with the eighth one being a senior cottage. I can live with that.”

“I never said that the plan that keeps the most trees as possible in the public ownership,” Merilee Hanson stated. “I said something like alternative D which keeps the Canary Pines in public ownership is preferable.”

The commission ultimately adopted this, with enough feedback to the city staff and applicant to allow them to see how to move forward before the Davis City Council takes up the matter.