If organizers were hoping that their monthly “JumpStart Davis” event billed as a networking opportunity and monthly mixer would strengthen and encourage the local startup community, their first event with a good crowd at Sophia’s and two engaging speakers from the local startup scene had to excite.

Michael Bisch, President of the Davis Downtown was one of key organizers of the event. In the introduction to the event, he explained, “Over the past few weeks a number of people have come up to me and said we need to do some more things to foster a startup culture here in our community, these people then decided to take on four initiatives just to get started with.”

The first initiative was to have a monthly mixer. The second initiative was to explore creating a co-working space. He said that they are well on their way to doing that in the downtown right behind where Sophia’s is located.

The third initiative was to bring some TedX events to Davis. “TedX-UC Davis already does events on campus and we wanted them to bring their exciting programming to our downtown.”   Starting on Saturday from 9:30 to 12:30 at the Varsity Theater will be a TedX Salon event.

The fourth initiative is to create a $1 million start up fund.

Anthony Costello, who is one of the founders of Davis Roots, spoke briefly on his company Mytrus. He explained, “Mytrus is a clinical research company. We’re a technology firm, we work in the clinical research industry – drug trials, pharmaceutical trials.”

“There are 6.3 million patients that participate in a clinical research trial each year, 17,000 patients a day sign an informed consent document that allows them to participate,” he continued. “The difficulty for patients is that they don’t understand clinical trials – they’re very complicated, they’re very difficult logistically, it’s hard for patients to make a decision to treat their health condition with an investigational drug that’s not approved by the FDA.”

He said there’s a movement in the industry to refocus these trials to simplify it for the patients and make it easier to participate and allow them to understand the trials that they’re engaging with.

“Mytrus is building end-to-end technology to engage patients in these studies,” Mr. Costello explained. This includes recruiting patients, creating electronic consent for treatment, they are able to enter their own research information from home, and they provide data for the patients at the end of the study.

Graham Ryland, the CEO of Barobo, also presented on Tuesday. “We make educational robots.” Based in Davis, they are one of the first graduates of Davis Roots.

He explained, “Coding is a 21st Century skill. The same way that people who learn how to type in our time now have jobs, people who don’t know how to code won’t have jobs in the very near future.”

He talked about barriers – programming is difficult to get started and teachers are not training well. “This is new to them,” he explained. “We have developed a new way to program.”

They developed something called “pose-teaching” where they can push record, “and it remembers the poses that you entered into it” and then enters the coding for those poses.

Following the brief presentations, people resumed their cocktails and networking. The Vanguard spoke to Bill Habicht, one of the organizers of the event.

He said, “(The purpose) is to draw together innovative minds, startups, just have them meet each other to create new things.” 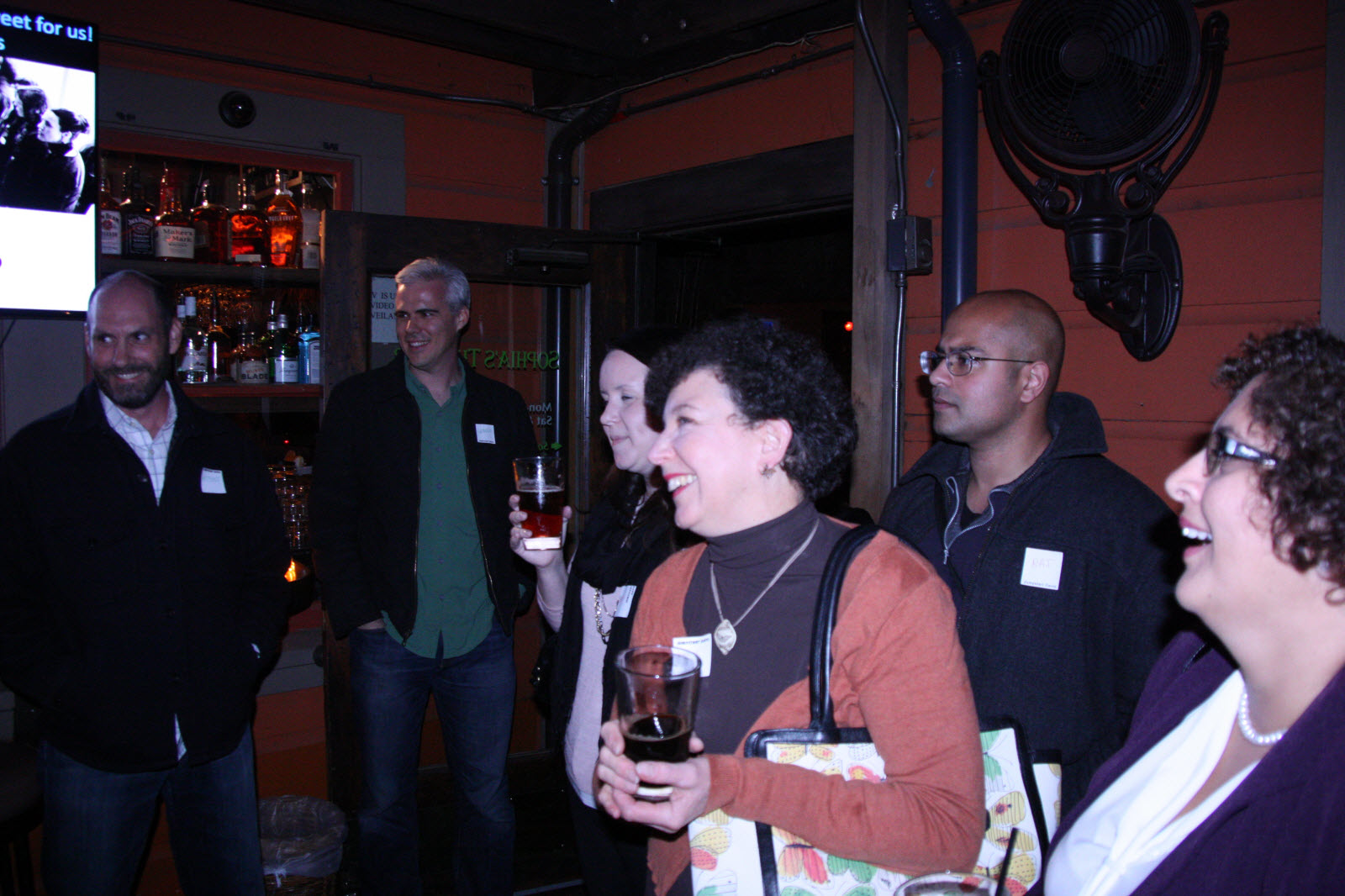 “Michael Bisch and I were talking about the Innovation Park/ Innovation Center that were being discussed and kind of saw that there was this middle ground that wasn’t being addressed yet which is the innovation ecosystem . It’s more of a cultural piece, so we’re trying to help develop the innovation culture,” he explained.

Daniel Parrella, another organizer said that he and Michael Bisch “both had a desire to build the startup community. Michael was the one who recommended startup communities to me. One thing we noticed that all startup communities had in common was a monthly networking event that showcases startup companies. We decided to launch Jumpstart Davis with the help of a bunch of people who helped organized.”

Councilmember Brett Lee told the Vanguard, “I think this is great, it’s a nice fun event which serves as both fun but also a networking event.”   He said, “The brief presentations… gave people a flavor as to the things that are going on in Davis. Myself included, a lot of us don’t really know. There’s just so much going on that we’re just not aware of.”

“I’m hoping eventually we’ll have presentations like that kickoff our council meetings each month just so the greater community really understands,” he added. “When we talk about economic development a lot of people don’t understand that Davis is attractive for not just the university.” 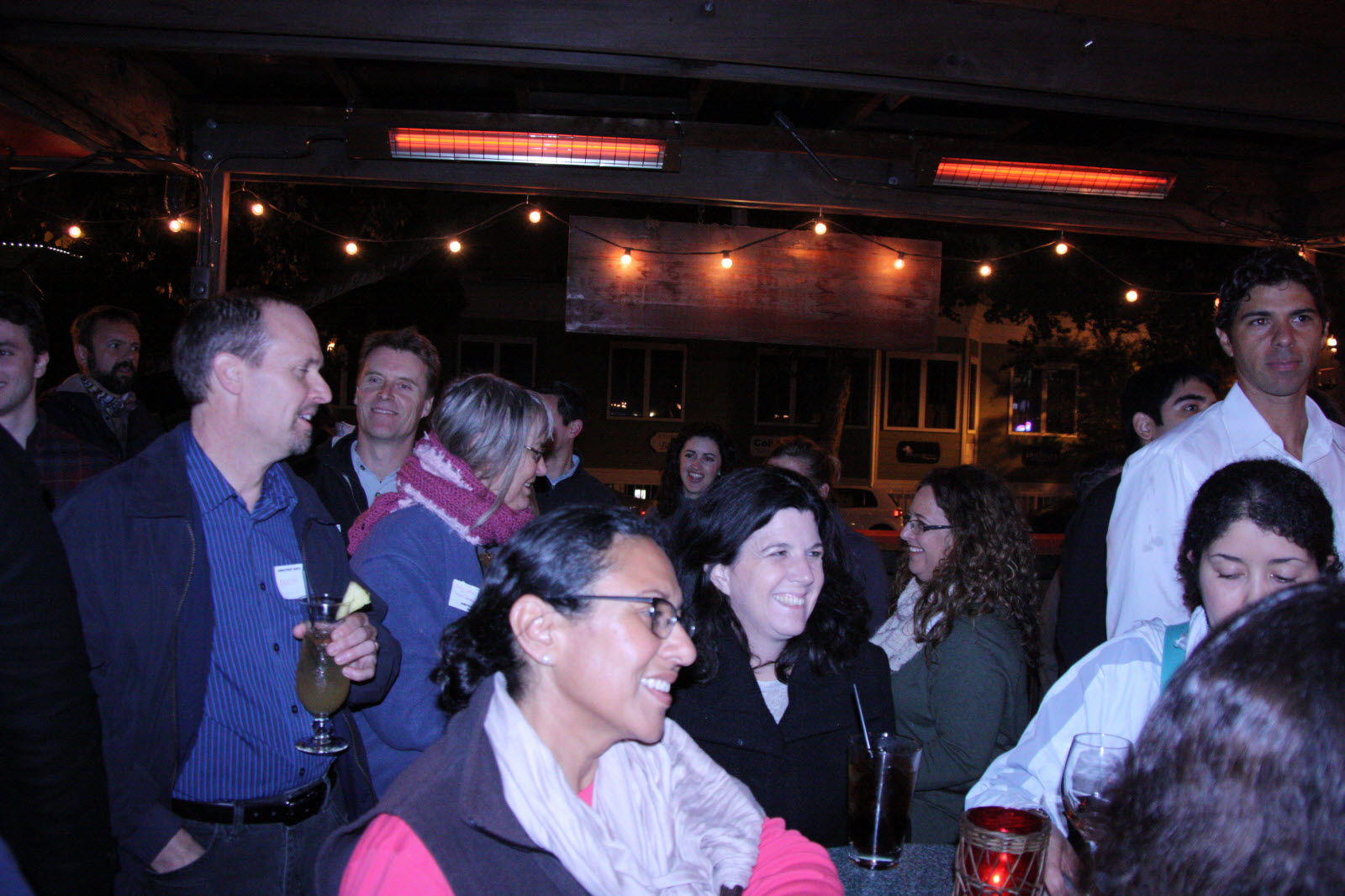 He said this is not just about the university, one example he game was HM Clause, “but there also all these smaller companies that spring up and they like Davis. For them there’s value in being in Davis.”

Anthony Costello told the Vanguard, “One of the reasons we founded Davis Roots was to do this kind of event. We can’t do everything through one or two or three of these programs. It’s going to be the cumulative effect of all of them. We’ve seen a lot of companies coming into Davis Roots – they’re looking to connect with students or experienced professionals for board members or mentorships. I think it’s these networking events that are going on more and more in town that are connecting those dots.”

As the head of his own startup, he said it’s not dissimilar, “we’re advertising, we have job listings, but I just in the last five minutes met three people here who have the right kind of experience to work at company like ours. They had no idea we were in Davis, they had no idea what we did, but a five minute side-pitch on the company helps to connect us at an event like this.”

Daniel Parrella was very pleased with the event. “It’s phenomenal, just the people who I have been talking with… In startup communities talks about is the idea that you have to get connectors, investors, and entrepreneurs together… That’s exactly what needs to happen, we need to bring these people together.”

Michael Bisch and Bill Habicht other organizers are hoping this will become a monthly happening in Davis and they are moving forward on the co-working space as well creating that $1 million start up fund.

Mr. Habicht said, “Right now we’re kind of open to ideas. We’re looking to crowdsource the ideas from the community to see where this is going.” He said he sees it as “a grassroots venture. One of the things is the $1 million start up fund that we’re hoping to raise. The co-working space that’s already in development and then events like this where people can get together and learn from one another.”

Share:
Tags:DavisDavis DowntownDavis RootsEconomic DevelopmentStartupsTechnology
Previous : Where to Get Inspiration on Innovation
Next : Defendant Claims He Was Not Driver in Chase

10 thoughts on “Davis Startup Culture Gets a Huge Jump Start”