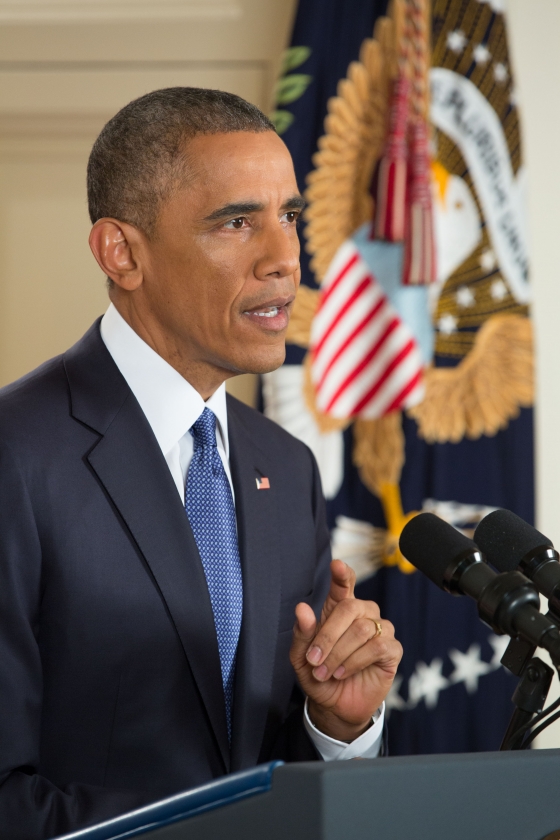 While some have complained that the President overreached by using the executive order route to address immigration reform, the President pushed back that Congress should pass legislation on the issue, and others have argued that the reform does not go far enough in drawing a five-year boundary on “amnesty” and only impacting five million of the current 11.4 million undocumented immigrants.

The plan would create a new program of “deferrals” that would impact the approximately four million undocumented parents of American citizens or legal permanent residents who have been in the country for at least five years. Deferrals would include authorization to work and would be granted for three years at a time.

However, now with Congress apparently hopelessly at an impasse, President Obama is emphasizing that he has the ability to change how immigration laws are enforced.

Republican responses have ranged from anger to threats whether through legislation or legal means. “I believe his unilateral action, which is unconstitutional and illegal, will deeply harm our prospects for immigration reform,” Senator John Cornyn, Republican from Texas, said.

“Since the founding of our nation, we’ve weaved a tradition of welcoming immigrants into the very fabric of who we are. It’s what keeps us dynamic, entrepreneurial, and uniquely American,” President Obama said.

Last night President Obama addressed the nation on the executive actions he is taking to help fix what he can.

First, he said, “We will build on our progress at the border with additional resources for our law enforcement personnel.”

President Obama stated, “Today, we have more agents and technology deployed to secure our southern border than at any time in our history. And over the past six years, illegal border crossings have been cut by more than half. Although this summer, there was a brief spike in unaccompanied children being apprehended at our border, the number of such children is now actually lower than it’s been in nearly two years. Overall, the number of people trying to cross our border illegally is at its lowest level since the 1970s. Those are the facts.”

Second, he said, “We will make it easier and faster for high-skilled immigrants, graduates, and entrepreneurs to stay and contribute to our economy, as so many business leaders have proposed.”

Third, “We will take steps to deal responsibly with the millions of undocumented immigrants who already live in our country.”

He said, “Families who enter our country the right way and play by the rules watch others flout the rules. Business owners who offer their workers good wages and benefits see the competition exploit undocumented immigrants by paying them far less. All of us take offense to anyone who reaps the rewards of living in America without taking on the responsibilities of living in America. And undocumented immigrants who desperately want to embrace those responsibilities see little option but to remain in the shadows, or risk their families being torn apart.

“We are a nation of immigrants, and we are a nation of laws. We must hold accountable those who broke the law, while understanding that the mass deportation of millions of Americans is neither possible nor in keeping with who we are as Americans.” That is why the President is focusing enforcement resources on actual threats to our security: “Felons, not families. Criminals, not children. Gang members, not a mom who’s working hard to provide for her kids.”

He stated, “I continue to believe that the best way to solve this problem is by working together to pass that kind of common-sense law.”

So here is the deal the President put forward on Thursday:

First, “If you’ve been in America for more than five years; if you have children who are American citizens or legal residents; if you register, pass a criminal background check, and you’re willing to pay your fair share of taxes — you’ll be able to apply to stay in this country temporarily, without fear of deportation. You can come out of the shadows and get right with the law.”

He argued that “this deal is not amnesty.” He continued, “Amnesty is the immigration system we have now, in which millions of people live here without paying their taxes or playing by the rules, and politicians use this issue to scare and divide Americans.”

He argued, “That’s the real amnesty — leaving this broken system the way it is. Mass amnesty would be unfair. Mass deportation would be both impossible and contrary to our character. What I’m describing is accountability — a common-sense, middle ground approach: If you meet the criteria, you can come out of the shadows and get right with the law. If you’re a criminal, you’ll be deported. If you plan to enter the U.S. illegally, your chances of getting caught and sent back just went up.”

He argued that, while 68 Democrats, Republicans and Independents passed reform last year in a bipartisan bill that would have “doubled the number of Border Patrol agents; given undocumented immigrants a pathway to citizenship if they pay a fine, start paying taxes, and go to the back of the line; and boosted our economy while shrinking the deficit,” the House Republicans have blocked the bipartisan bill.

“Had the House of Representatives allowed that kind of a bill a simple yes-or-no vote, it would have passed with support from both parties, and today it would be the law,” the President noted.

The White House stated, “So the President had to act, just as every president since President Eisenhower has over this last half century.”

“Here’s the problem we have. I’d like to see all of the families of Dreamers be protected,” he told reporters.

He told reporters that the order will not cover the parents of illegal immigrants who came to the country illegally at a young age and were protected from deportation by an expansion of immigration law by the Department of Homeland Security in 2012. Nor will the order cover farm workers, he said.

“It’s the opinion of the White House counsel that you cannot build executive action on top of executive action so they had to be careful in the way that this was written to comply all the precedents and law on the subject,” Senator Durbin said

“I think this is as far as the president believes he can go,” he said.

He said some pro-immigrant advocates will “want more [and] I don’t blame them, I want more.”

However, he said, “I think this is a positive step forward.”

California Governor Jerry Brown reacted to the news: “Tonight, in the face of Washington gridlock, the President stepped up for hard-working families across America. This is the right thing to do, and it’s time for Congress to finish the job.”

His office noted, since taking office Governor Brown has signed the Dream Act, which allows top students who are on the path to citizenship to apply for college financial aid; AB 60, which extends the legal right to drive on the state’s roadways to millions more Californians; and a number of other bills to enhance school, workplace and civil protections for California’s hardworking immigrants. Earlier this year, Governor Brown also signed legislation to provide legal services to the unaccompanied minors arriving in California from Central America.

California Attorney General Kamala Harris added, “I applaud President Obama for taking steps to fix our broken immigration system. These executive actions prioritize deporting felons not families, and will help restore trust between law enforcement and the communities they serve. This action will extend the American Dream to millions of individuals who want to come out of the shadows.”

“Both the president and the Republican Party confront risks here,” said Bill McInturff, a Republican pollster quoted in a New York Times article this morning. While the danger for Mr. Obama is “being perceived as overstepping his boundaries,” Mr. McInturff said, “the Republicans’ risk is opposing his action without an appropriate tenor, and thereby alienating the Latino community.”

Senator Ted Cruz was quick to state on Facebook, “His actions are not only unconstitutional and in defiance of the American people who said they did not want amnesty in the 2014 elections, but they are also unfair to every immigrant who has come to our nation legally.”

On the other hand, Senator Lindsey Graham warned, “If you overreact, it becomes about us, not President Obama.”

“Brooks doesn’t get it. But he is not alone. Obama isn’t ‘rewriting’ anything, but simply applying discretion in enforcing the law.”

So does this go too far or not far enough? Depends on whom you ask.