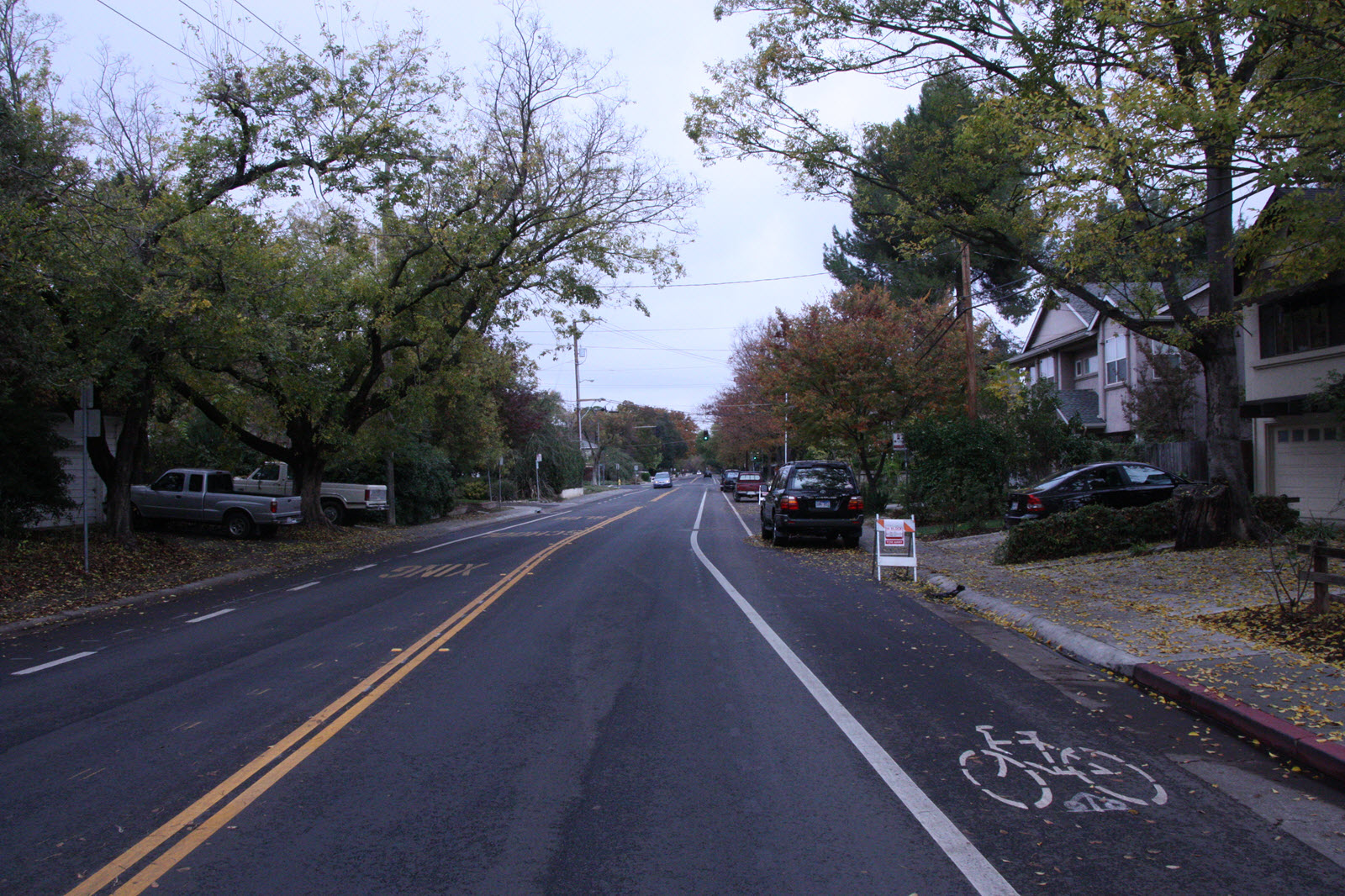 While we applaud the Davis City Council for looking toward better conflict resolution models with regard to safety concerns on B Street, it would appear we need to start with properly and adequately diagnosing the problem.

Yesterday morning after writing on the council meeting, I drove the route a few times. One of the problems is that B Street narrows around Seventh Street and so the road goes from a fairly wide road that has parking, a full bike lane and a striped buffer to a segment that has a bike lane next to parking with no buffer or margin for error between the parking, the bike lane and the traffic.

My video shot from my dash cam, shows the transition and the potential for problems.

Notice how the at the end of the block you have a high profile SUV followed by a truck with a trailer. During times of heavier traffic, with parents biking with their children, these present hazards. There is no margin for error and there is only a narrow space between the bike lane and oncoming traffic.

That problem is illustrated in this photo that a resident provided the Vanguard, which shows a kid and a parent biking down the street and the very small margin for error between the parked cars and traffic.

We are, of course, assuming that parked cars are going be to the curb side of the bike lane lines, not parked between the bike lane lines. This trailer is legally parked, however, its rear wheel is at least one third of the way into the street, in the bike lane – imagine there being a child trying to bike alongside a solid stream of traffic.

One thing that becomes clear from watching both the video and looking at these photos is that the problem here is not necessarily created by residents wanting to park in front of their homes. Council made the point that people with limited mobility are not going to be able to park away from their homes – but the problem here appears to be vehicles that have purposes other than transporting residents.

One step toward a solution might be council examining the parking uses along this stretch more closely to see which vehicles and residents have legitimate needs to park on this stretch of the street.

The current configuration forces the kid on his bike, who may be wobbling rather than simply riding his bike, right out next to vehicle traffic. Then the kid has to confront vehicles protruding into the bike lane, as well as the potential of car doors opening.

The photo above shows a woman and her child biking down the street. The person who shot it saw them at first side by side in the bike lane, but when they crossed Seventh Street, the bike lane narrowed, she pulled back and got behind her child.

During the meeting on Tuesday, city staff told council that there was no guidance on the width of bike lanes. However, that is not true. The California Manuel of Highway Design has a chapter on bike lane widths.

The manual states that a curbed street with prohibited parking “is generally the most desirable configuration for bike lanes, as it eliminates potential conflicts resulting from auto parking (e.g. opening car doors).”

“First, the longitudinal joint may not always be smooth, and may be difficult to ride along.

“Secondly, the gutter does not provide a suitable surface for bicycle travel. Where gutters are wide (say, 1.2 m), an additional 0.9 m must be provided because bicyclists should not be expected to ride in the gutter. Wherever possible, the width of bike lanes should be increased to 1.8 to 2.4 m to provide for greater safety. 2.4 m bike lanes can also serve as emergency parking areas for disabled vehicles.”

In the Complete Street Section of the City’s General Plan Transportation Element, it states, “Where limited street space exists, priority should be given to non-motorized modes to protect the safety and comfort of these more vulnerable users. Deviations from street widths in Table 2 to favor motor vehicles should be location-specific and result from either constrained right-of-way and/or safety considerations.”

Then it gives width guidelines: 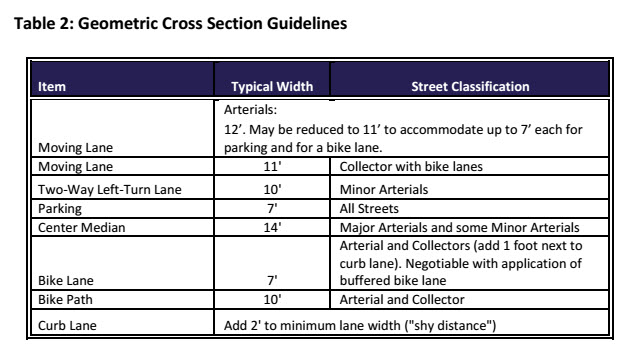 So the city’s standard is 7 feet for a bike lane width, but that goes up to 8 feet if it is adjacent to a curb.

The interesting fact is that the city recognizes that this is not simply a safety issue, but it is also an issue of “comfort.” Part of the problem with biking that stretch is the lack of comfort that bicyclists feel. As more and more people drive talking on their cell phones, we see more and more that distracted driving leads to more accidents than drunk driving.

If you are biking through that narrow stretch and a distracted driver is answering the phone – looks down and doesn’t see the bicyclist, the bicyclist is put in danger. The issue of comfort manifests itself in people avoiding that section of road and, because B Street is the safest passage past Eighth Street, they may avoid biking at all.

I can understand the council’s desire to use conflict resolution tactics and maybe that will enable residents who park work-related vehicles on that stretch to understand the problems those practices create, but if Davis wishes to be a safe community for bicyclists, the situation has to change because the status quo is not working.

Share:
Tags:B StreetBicyclingBike LanesSafety
Previous : My View II: The Pointless Tuition Hikes
Next : Sunday Commentary II: Why Drones Are Potentially a Threat to Privacy and Worse

34 thoughts on “My View: B Street Safety Over Convenience?”