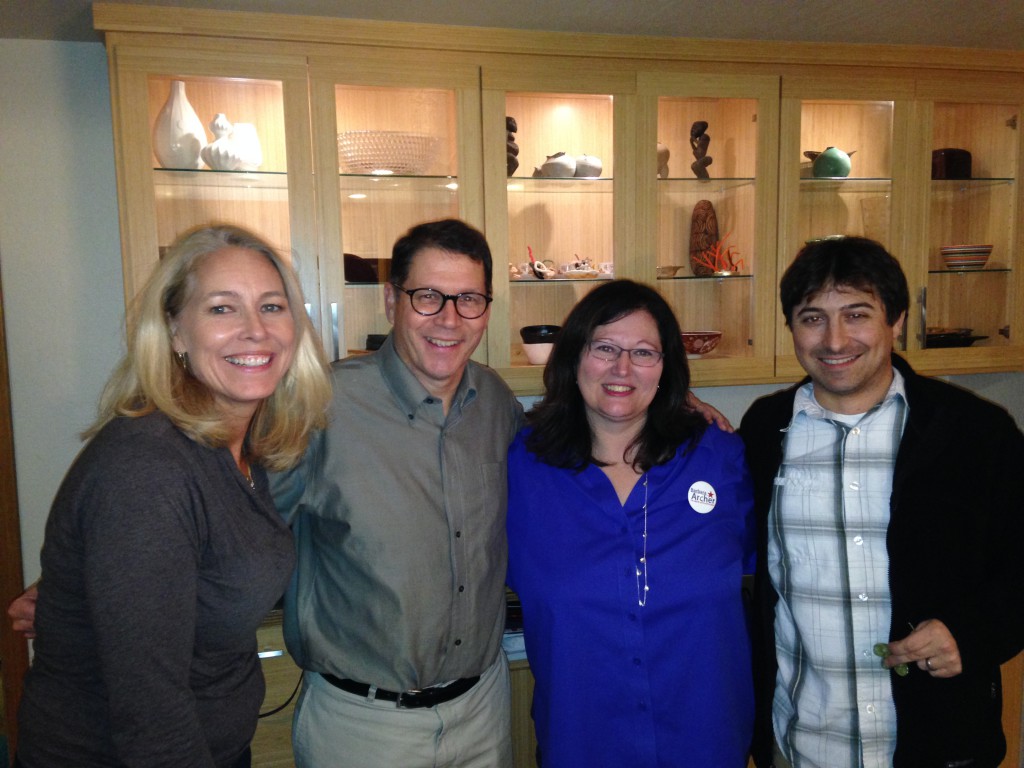 There was really no surprise in the school board race; the only question coming in was whether Tom Adams or Bob Poppenga would finish in third. The signs seemed to be pointing toward Tom Adams in the last few weeks, and he narrowly but comfortably beat out Bob Poppenga for third. 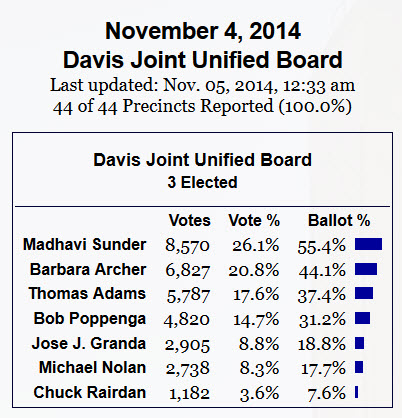 However, the story of the night was really the dominance of Madhavi Sunder, who not only finished first, but finished a resounding first, outpacing the field by 1700 votes and earning votes on 55.4% of the ballot. Barbara Archer was a comfortable second with 20.8% of the vote overall and 44.1% of the ballots.

Jose Granda finished a distant fifth, closer to sixth place Mike Nolan (less than 200 votes), and Chuck Rairdan finished seventh. Those numbers do not tell the full story, as Ms. Sunder would nearly match Dan Wolk from 2012 by winning all but two of the precincts last night, finishing second in the other two.

Madhavi Sunder at 9 pm last night was clearly in the driver’s seat. She told her supporters, “The news is rolling in, but we all know already that this has been an incredible day because this day marks a new generation of folks who are getting involved in Davis politics who are saying this community of excellence has come from people with visions of greenbelts, the Davis Farmer’s Market, the parks, the water, and the bike to school… all of that comes from the vision of people and now the new generation has taken that torch and we’re going to all run together the next mile.”

Barbara Archer told the Vanguard, “This has been such a wonderful experience. I’m so happy and what that leads me to believe is this is what I should do. I really like helping people, I really like serving community.” She added, “I feel happy and energized and I’m ready to get to work.”

“We’re going to have a board retreat where we’re going to identify our individual priorities,” she said when asked her first goal. “I might not even have identified them all as of yet.”

She stated, “One thing that is really important to me is the counselors’ issue and not having them funded with soft money.” She said, “I’ve seen first-hand what an effect that has on elementary campuses.”

Currently, PTAs fund elementary school counselors. Said Ms. Archer, “I think it’s too important to fund those based on what a PTA can raise.”

She said she’s worked on a lot of campaigns, but that “every campaign is different. The most interesting thing I learned was… I didn’t realize that when you’re the candidate how much front end work there is. That’s a different animal and that can be as taxing as the behind the scenes work because you’re really giving us yourself and really listening to people.”

“I didn’t realize how much the front end candidate works, how that would be,” she said.

She called it overall a clean campaign, and she was happy for the most part with how the candidates interacted with each other. 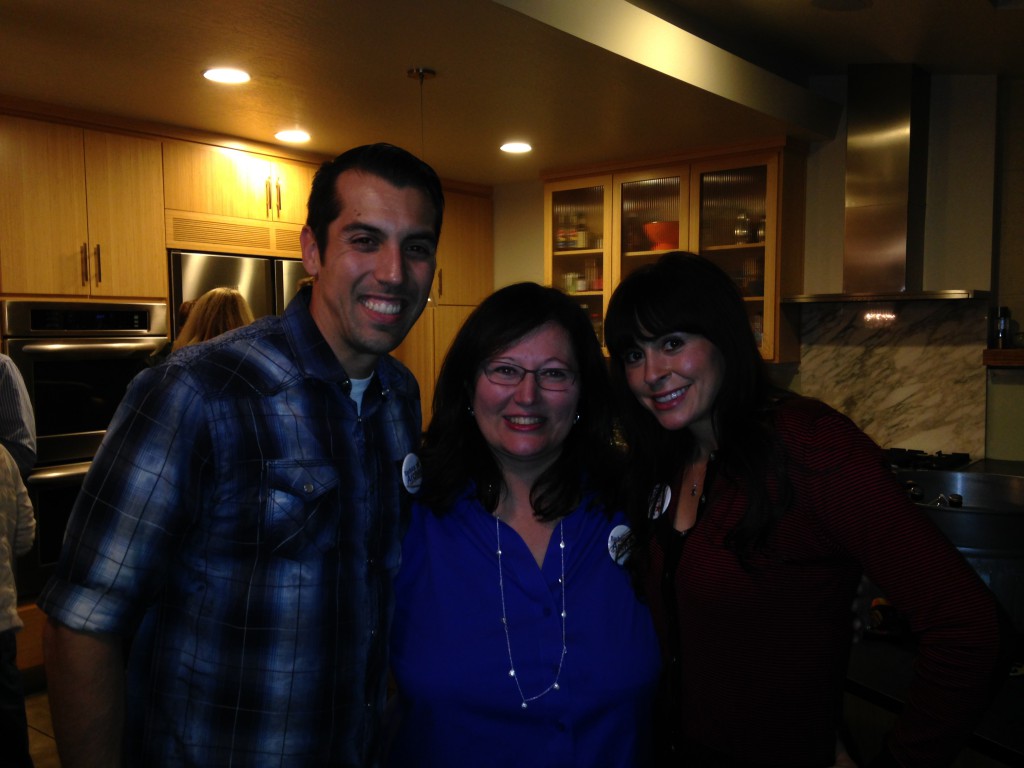 “After 100% of the precincts have been counted, I have finished third and I will be on the Davis School Board,” Tom Adams posted in the wee hours of the morning.

Early in the Davis campaign he had posted, “The best thing about Davis elections is the Davis electorate. We have voters who are engaged in the issues and who demand that candidates know and understand the concerns of the community. Because of this engagement, Davis is a model of civic participation. While running for elected office is a right, it has been an honor to run for school board.”

When the Vanguard spoke with Tom Adams it was just before 11 pm, and 22% of the precincts were reporting. At that time, it seemed likely, but not certain, he would finish third and win a spot on the board.

“I always knew Davis had an engaged community,” he said. “But I never knew how much. What was impressive was just the detailed knowledge of the voters and the thoughtful questions that were presented to me.”

“Beyond just the depth of knowledge, (I was surprised) by the fact that so many people want to do something for Davis schools, even people who don’t have kids in the schools – they want to volunteer, they want to help out, the great thing is that these schools remain community based schools.”

He said that the first thing he wants to do is: “One, working with my colleagues to make sure people feel confident in the district so that we can then in two years get the parcel tax renewed.”

But in many ways, the night belonged to Madhavi Sunder, who seemingly came out of nowhere to energize a broad group of citizens and finish a resounding first in the race.

“We feel so excited about the future for our schools. Our schools are the most important institution in our community and we need all hands on deck,” Ms. Sunder told the Vanguard late on Tuesday night. “I am so proud that we have energized a new generation of parents who have not been involved in Davis politics before.

“They recognize that they have been the beneficiaries for a number of years of the work of others. Now they’re ready to carry the torch to go the next mile to bring STEAM (Science, Technology, Engineering, Arts, and Math)to Davis, to make sure our climate is excellent, to make sure we are inclusive and empathetic,” she stated. “That we are focused on both science and the humanities. That we are preparing our children for the 21st century.

She said that she learned so much in the process. During the course of her campaign, she toured all of the schools in the district. “Some principals told me – they were just grateful, they said I was the closest thing to a board member that had been on their site in a number of years.,” she said.

“I think we have great potential here in Davis, nobody ever doubts that. The question is actually can we reach it,” she added.

Like her new colleague Tom Adams, Madhavi Sunder stated she was “surprised by how much our citizens cared and how much they were willing to do to support the kids and our future.”

Madhavi Sunder said there are a lot of issues that she thinks of when she wonders what should be the first issue to tackle.

“One thing that I’m very concerned about is school safety,” she said. “Another thing that I’m concerned about, that I’d like to tackle, is strengthening that relationship between the district and UC Davis. That’s the first partner that we should reach out to.” She added the city of Davis and the county for other partnering – on issues like healthy children, anti-bullying, services for families, mental health, “that requires partnering.”

She added, “There are so many people who said, I want to volunteer, I want to help, I care. Sometimes that can be overwhelming, so I think that we need to have some commitment and leadership” to integrate people into the district who want to volunteer their services.

The election of Madhavi Sunder, Barbara Archer and Tom Adams, along with the appointment of Alan Fernandes, concludes a tumultuous year where 80% of the school board will have turned over, following the March resignation of Nancy Peterson.

41 thoughts on “No Surprise in School Race: Sunder, Archer and Adams Cruise to Victory”