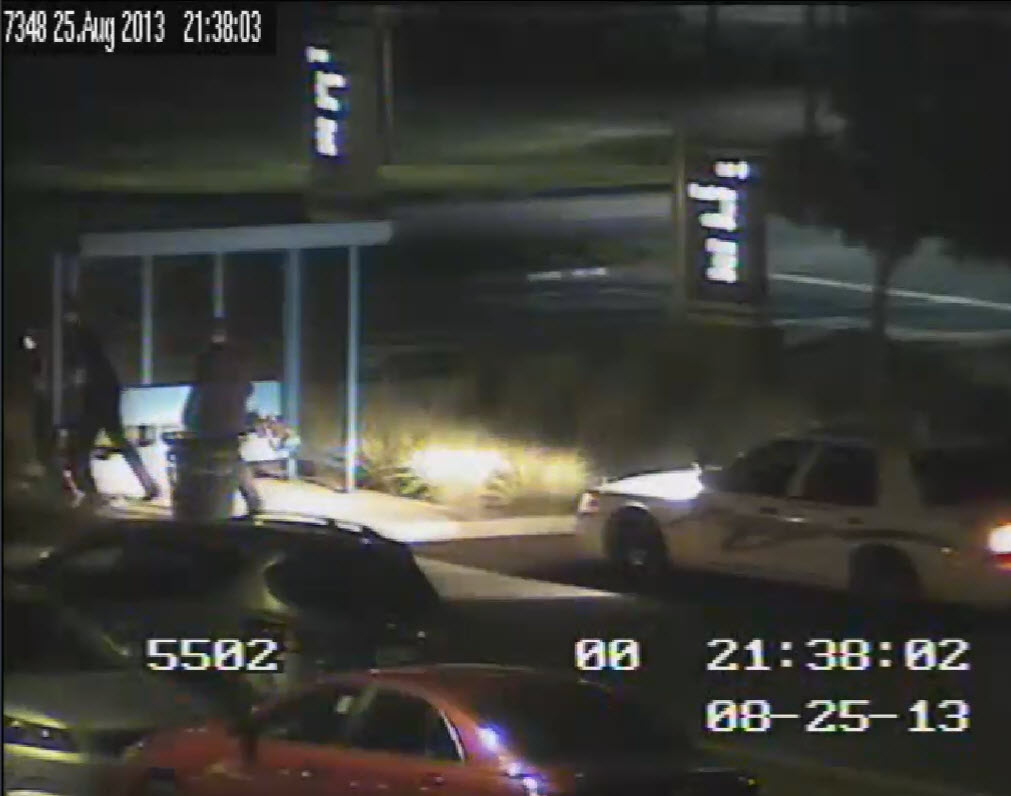 Back in April, the Vanguard covered the case of Chase Tinsley, who was arrested in August of 2013 for possession of 0.06 grams of meth by Yolo County Sheriff’s Deputy Charles Hoyt. At that time, the defendant alleged that Yolo County Sheriff’s Deputy Hoyt had conducted an illegal search, and surveillance shows the deputy slamming an apparently compliant subject into the side of a bus stop.

On Tuesday, the case took some unusual turns. First, as it seems to be happening to every case in Yolo County, Judge Samuel McAdam reduced the single felony charge for possession to a misdemeanor, per Prop. 47. He then confirmed for the afternoon a Penal Code section 1538.5 motion to suppress evidence.

It was in the afternoon that the case took an unusual turn. Deputy Public Defender John Sage told Judge McAdam that on September 23, in a Penal Code section 995 motion, a motion to dismiss one or more of the charges, the judge had dismissed the charge against Mr. Tinsley due to ineffective counsel. After some dispute with Deputy District Attorney Larry Eichele, all parties agreed that had, in fact, occurred.

Mr. Eichele had not refiled the case, meaning, according to Mr. Sage, the court no longer had jurisdiction over this matter To make matters more interesting, because the case had been reduced to a misdemeanor in the morning, the statute of limitations was reduced from three years down to one year to file charges.

Mr. Eichele disagreed that the reduction to a misdemeanor charge will cause them to lose out on the statute of limitations, however, that will be argued at the next hearing date.

Given that this is now a misdemeanor possession case, is it worth the People’s time to continue a case that is more than a year old? In the 1538.5 motion filed by Mr. Sage on October 23, he argued that the 0.6 grams of meth found in a small red plastic container was “evidence seized or obtained from (an) illegal search of Mr. Tinsley’s pockets” and that the “evidence was seized in violation of the defendant’s right to be free from unreasonable search and seizure as guaranteed by the Fourth Amendment of the United States Constitution.”

The events on August 25, 2013, started when Mr. Tinsley’s vehicle had caught fire at the Cache Creek Casino and was towed away at his request. Mr. Tinsley and his former boyfriend, Julian Lopez, in need of a ride, arranged with the defendant’s mother to have a taxi pick them up.

They were spotted by security seemingly loitering, and, according to one of the security officers, one of them appeared intoxicated and had urinated in the parking lot.

Mr. Lopez would be arrested for Penal Code 647(f), drunk in public, while Mr. Tinsley sat at the bus stop and cooperated as instructed.

Mr. Sage wrote, “After Mr. Lopez was handcuffed, arrested and placed in the back of the patrol car, Deputy Hoyt approached the bus stop area and commanded Mr. Tinsley to stand up. Mr. Tinsley cooperated.”

Mr. Sage argued that Mr. Tinsley was wearing fitted clothing rather than loose baggy clothing, he has surrounded by a deputy a foot taller and had no history of violence. Moreover he had been cooperative throughout, as evidenced on the video, and “noted by Deputy Hoyt in his report.”

Despite this, “Deputy Hoyt believed he had sufficient Terry facts to justify and conduct a pat down for weapons without Mr. Tinsley’s consent.” During the pat down, “Deputy Hoyt reported Mr. Tinsley pulled his hand away and attempted to swing away in a rapid manner, requiring Deputy Hoyt to ‘secure’ Mr. Tinsley against the glass portion of the bus stop wall.”

However, the video shows otherwise. It shows “Mr. Tinsley making a slight movement when the deputy was patting him down near his left shoulder or armpit, and then appears to show the deputy (who appears to be approximately a foot taller and perhaps a hundred pounds heavier than Mr. Tinsley) grabbing hold of Mr. Tinsley and after moving him what looks to be a few feet, proceeding to body slam the diminutive, cooperative, unarmed defendant into the glass of the bus stop.”

Mr. Tinsley had no weapons and “remained cooperative and completely honest with the Deputy who had ‘just’ body slammed him into a glass wall inside the bus stop.”

It was at this point, that the Deputy asked if Tinsley had anything illegal inside his pants’ pocket and Mr. Tinsley said yes and that he had meth. Wrote Mr. Sage, “At that point, Deputy Hoyt removed a small red plastic container about the size of a quarter from Mr. Tinsley’s front left pants pocket, something so small that even if visible through Mr. Tinsley’s fitted clothing, that no reasonable person would mistake it for a weapon.”

Mr. Sage wrote, “Deputy Hoyt did not observe Mr. Tinsley commit a public offense in his presence.” He added, “The only basis for placing his hands on Mr. Tinsley would have to be as a result of specific and articulable facts that would lead a reasonable officer to believe that Mr. Tinsley had a weapon.”

Mr. Sage, after laying out the rules set down under Terry v. Ohio, argued that Mr. Tinsley’s conduct gave Deputy Hoyt no reasonable suspicion that Mr. Tinsley possessed a weapon or represented a danger.

Mr. Sage argued, “Simply put, Deputy Hoyt, in his report, listed no factors which would warrant a man of reasonable caution in the belief that the action taken against Mr. Tinsley was appropriate. If no Terry facts were present, the only basis for which Deputy Hoyt could search Mr. Tinsley would have to be based on the personal consent of Mr. Tinsley. Consent which Mr. Tinsley DENIES was ever given.”

Mr. Sage added, “In the present case, the search which uncovered the evidence the prosecution now seeks to introduce against Mr. Tinsley occurred after Mr. Tinsley was forcibly detained by Deputy Hoyt and no consent to search was allegedly obtained. There were no circumstances intervening between the detention and any alleged consent. Finally, the official misconduct represented by these officers’ actions is grave in nature. Where law enforcement officials subject an individual to detention in the absence of any kind of articulable suspicion particular to that individual, they violate the letter and spirit of the Fourth Amendment proscription against unreasonable searches and seizures.”

He continued, “Deputy Hoyt did not have probable cause to arrest Mr. Tinsley (and subsequently, search him incident to that arrest) because no crime was committed in the deputy’s presence; nor did he have explicit or implied permission to search him. Because the unlawful detention violated the defendant’s Fourth Amendment rights, all evidence seized following the illegality must be suppressed as ‘fruit of the poisonous tree.’ “

Given that this is now a misdemeanor charge, even if Mr. Eichele can convince Judge McAdam that the statute has not run on refiling charges, is this really worth the district attorney’s time and effort when the video evidence fairly clearly backs up the arguments made by Mr. Sage?

Share:
Tags:Court WatchIllegal SearchMethMotion to SuppressProp 47Terry SearchYolo County DA
Previous : Defendant Allegedly Under the Influence of Ecstasy During Chase
Next : Where to Get Inspiration on Innovation