On Tuesday, the council will receive a major update on the status of two innovation park applications, as well as be asked to approve guiding principles and a range of alternatives.

The Mace Ranch Innovation Center (MRIC) application was accepted for filing on September 15, 2014. The applicant is Dan Ramos of Ramco Enterprises, a West Sacramento land developer, partnered with The Buzz Oates Group of Companies, a Sacramento real estate firm. The 229-acre property proposes 2,654,000 square feet (sf) of space which includes 1.5 million sf of research and office space, 884,000 sf of manufacturing, 160,000 sf of hotel and 100,000 square feet of retail.

The Davis Innovation Center application was accepted for filing on November 3, 2014. The applicant is SKK Developments, a Sacramento real estate firm partnered with Hines Company, an international real estate investment firm. The 208-acre property proposes 4 million square feet (sf) of space including 3 million in technical office and laboratory, another 680,000 for research and development, 200,000 sf for a hotel and 120,000 for retail. 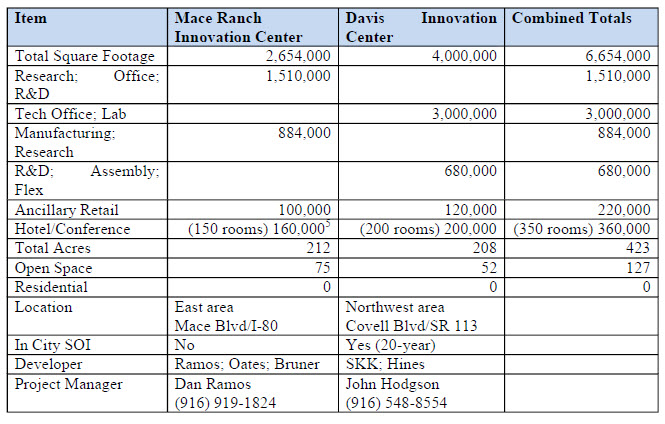 They add, “With the acceptance of these applications and commencement of processing pursuant to California planning, zoning, and development laws, this brings to a logical conclusion the work of the Innovation Park Task Force.”

Staff has created a set of “Guiding Principles” to “better define community values and clarify community expectations for evaluating and guiding refinement of proposed Innovation Centers. The principles provide a framework for community evaluation of the two projects. They will be used as one of several evaluation tools for assessment and comparison of the innovation center proposals.”

On density, the city encourages a minimum floor area ratio (FAR) of 0.5, a more intense use of land, and a mix of building types in order to support “efficient use of land balanced with achieving the needs of tenants.”

Sustainability figures to be a big issue. Some of the concepts that the city lays out includes street designs that minimize paved surfaces. They support a reduction of greenhouse gases through reduction of vehicle trips, alternative transportation modes, LEED/green building design, net-zero energy production and a goal to achieve 1990 emission levels.

They discuss the need for greater energy efficiency, CALGreen Tier 1 at a minimum, photovoltaic panels and the retrofit of existing buildings.

The principles include a 2 to 1 mitigation for agricultural land, research fields in agricultural buggers and maintenance and ownership of open space.

On transportation, they discuss the need for multi-modality, which includes alternative transit and shuttles, mobility for bicycles, pedestrians and alternative fuel vehicles, connectivity for bicycle, pedestrian and transit networks, alternatives for vehicle parking, and bicycling sharing programs.

On fiscal considerations, they support fiscal neutrality and economic benefit. They believe that this project will result in net community benefits including social and environmental. The project should provide substantial surplus annual revenue (over costs), positive economic impacts, and citywide multipliers. Infrastructure and construction costs should (will) be absorbed by the project.

It will create new jobs and tax revenue. It would generate revenue through an assessment district and/or pay annual per-square foot charge.

Staff recommends that the city council “direct staff to utilize the proposed final Guiding Principles in evaluating the merits of the innovation center applications and conclude the City Council Subcommittee on Guiding Principles.”

Staff writes, “At this early stage in the process the staff believes that the following range of alternatives satisfies these criteria and is appropriate and necessary for meeting the requirements of CEQA and ensuring legal defensibility. These alternatives will evolve based on information that will be generated from the technical studies.”

Staff notes, “Housing was not recommended for inclusion in project(s) during the RFEI process, nor are the applicants proposing housing as part of their proposals. However, CEQA requires that the lead agency test alternatives that could reasonably reduce significant impacts of the project.”

They continue, “Staff anticipates that the project EIRs may identify significant impacts related to vehicle miles traveled, and air quality and greenhouse gas emissions. As a result, staff has concluded that a mixed use alternative will likely be necessary to satisfy CEQA requirements.”

They add, “There is a growing field of study that demonstrates that mixed uses can lower the traffic, air quality, greenhouse gas, energy efficiency, and related impacts of separated land uses. This alternative will test the possibility that a mix of innovation center and residential uses will generate lowered amounts of regional traffic, vehicle miles traveled (VMT), and greenhouse gas emissions as compared to the business-only proposals.”

There are a few key things to emphasize. First, within the guiding principles, the city holds the minimum FAR at 0.5, and although a minimum, we noted a month or so ago that that FAR seemed a bit low. Nevertheless, it is sufficient to generate around 6.6 million square feet of innovation space.

Second, the city is pushing the sustainability angle – LEED Standards are low, but challenging the developers to head to net-zero energy production would be monumental. The other side of that coin of course is transportation issues – merely connecting the parks to existing alternative modes is probably not sufficient. We would really like to see the envelope pushed here and, while housing has been talked about as a death-knell, producing high-density mixed use housing here to provide for people working onsite to not have to commute might at least be worth exploring.

We also note that the principles include a stringent 2:1 mitigation requirement which is already contained in Measure R.

We will note that the Davis Innovation Parks have scoping meetings next week. In the winter of 2015, the city writes, “The technical and other studies will be completed and peer reviewed for use in the Environmental Impact Report (EIR) and later steps of the process.”

By June 2015, the draft EIR will be targeted for release. By October, it will prepare and release responses to the comments received on the Draft EIRs. Council will take final actions on the projects by November or December with March 2016 the target date for placement on the ballot.

One of the questions we raised this week is whether putting competing measures on the ballot in March 2016 was optimal, and how the city and city council might go about winnowing down the proposals.