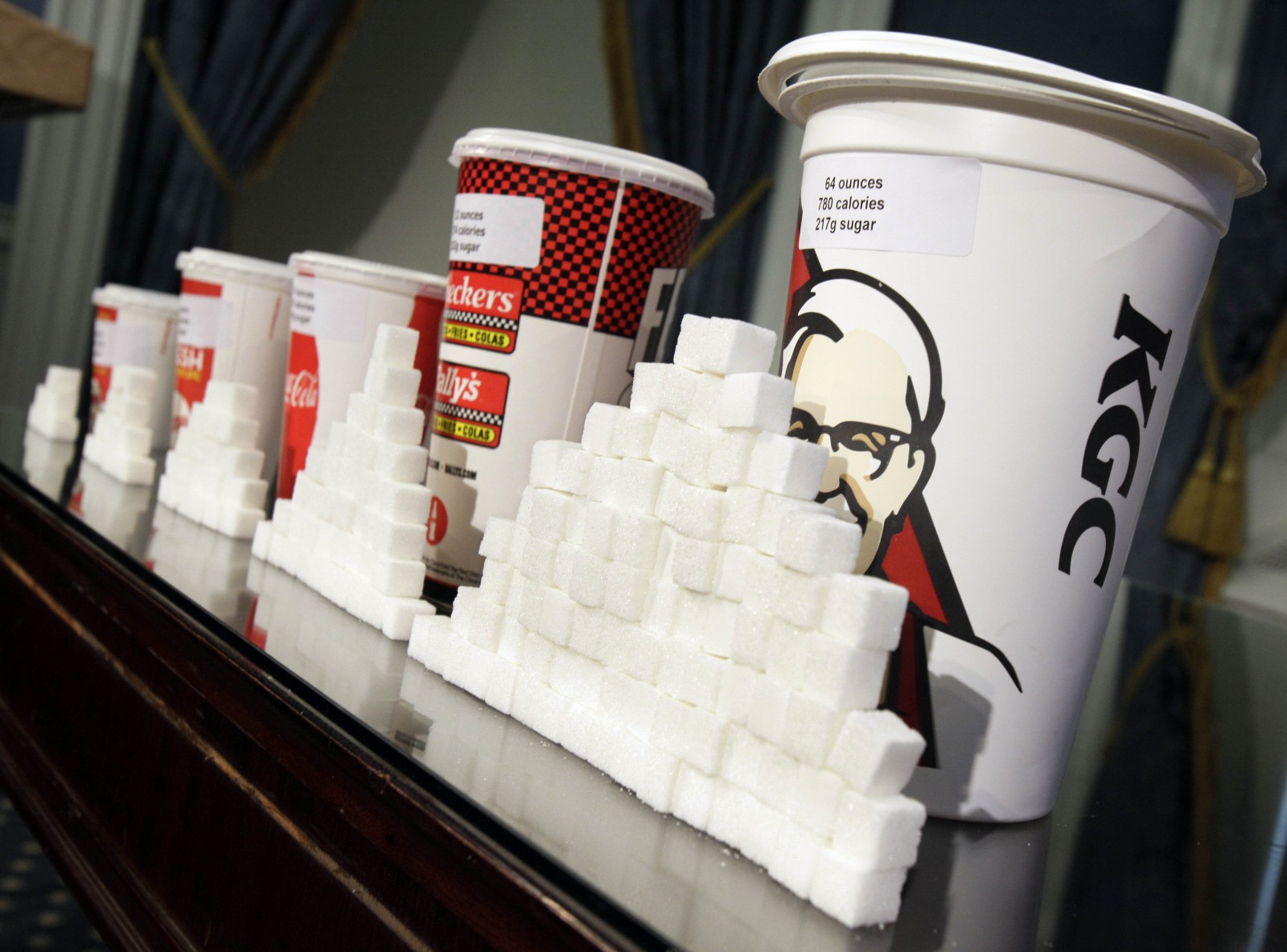 A source told the Vanguard that a few years back, the city was approached by health proponents about the possibility of a soda tax as a funding mechanism to help deal with issues of obesity. While the city of Davis had some interest, neither Woodland nor West Sacramento had showed much inclination.

However, as the city of Davis, led by Mayor Dan Wolk pushes for a healthy children’s initiative, a soda tax might be a good source to help the city, school district, and county work together to improve nutrition and the quality of school meals.

Last month, Berkeley became the first US city in the nation to pass a law taxing sugary drinks with more than 75% of the voters backing a one cent per ounce tax on soft drinks.

According to Time Magazine, “Proponents of the measure say the tax will curb the consumption of sodas, energy drinks and sweetened teas which are contributing to the country’s obesity epidemic and Type 2 diabetes. Harvard researchers found in a 2013 study that increasing the price of a 20 oz. soda by 20 cents led to a 16% sales drop. But critics say such measures are nanny statism, and remove consumer choice.”

A similar proposal failed across the Bay in San Francisco. That measure would have imposed a 2-cent-per-ounce tax and required a two-thirds majority to pass.

Time reports, “The Berkeley measure overcame a multimillion-dollar opposition campaign funded by soft-drink manufacturers. A proposition in New York that would have banned large-size sugary beverages was blocked by a New York State judge.”

“I’m eager to see this experiment perform. We haven’t had a chance to see if taxing soda will reduce consumption because the industry has fought it so ferociously,” Michael Pollan, a food policy writer and professor at the University of California, Berkeley told Time before the vote. “I think there are still a lot of people out there who haven’t gotten the message that soda is bad for you.”

While Mayor Wolk has pushed for replacing soda and sugary drinks with lower sugar options on kids meals, the Vanguard has focused more heavily on breakfasts provided by the schools to low income children, a soda tax might be a good way to fund more nutritious options for breakfasts.

We put parcel tax money into improving school lunches, now we need to do the same thing with breakfasts. Part of the problem, as one poster noted, is that “the politics surrounding school parcel taxes has been to try to fund programs broadly so that they don’t specifically favor one demographic subset of the student population.”

He states that school breakfasts “are only available to students participating in the free/reduced lunch program, and when there is a high enough number of such students at a school site.”

This is a school issue that the school board needs to address, but why can’t we all work together to make sure that low income kids are at least getting two healthy and low sugar meals a day?

We need to do more.

Should the City Purchase a Half-Million Fire Engine?

During the MRAP debate, Councilmember Brett Lee made passing reference to the fact that the city would soon be purchasing a new fire engine. Apparently, Fire Union President Bobby Weist even offered to swap the fire engine for the city to purchase an armored vehicle instead of the MRAP.

The item has now come forward on consent. According to the staff report, “The proposed vehicle acquisition is to replace the following fleet vehicle: Fire Apparatus Engine 32 scheduled for replacement in FY 2013-2014. The total cost for the vehicle is $554,900.53. Sufficient Equipment Replacement funds are available and in the current FY 14-15 adopted budget.”

They add, that this purchase will help “to provide a consistent, safe, and reliable service delivery platform for our firefighters to work from.”

City notes: “The proposed vehicle acquisition utilizes a cooperative inter-agency agreement known as a ‘piggy back.’ The City uses these cooperative agreements to purchase vehicles and equipment whenever it is practical and cost-effective. Over the last fourteen years the City has used this method to replace numerous fire apparatus and other City vehicles and large equipment.

“In a cooperative inter-agency purchasing agreement, public agencies benefit from the specification development and bidding process of another public agency to purchase appropriate vehicles and equipment common to local government. The vendor agrees to accept additional orders based on the original bid price with minor vehicle option costs added to, or credits deducted from, the original bidding agency’s purchase order.

“Through such a cooperative agreement, the City of Davis is able to “piggy back” on the base price bid awarded by H-GAC [Houston-Galveston Area Council], to Pierce Manufacturing, Inc. and has the ability to add or subtract options based on the City of Davis Fire Department’s requirements. This makes the cooperative inter-agency purchase agreement process very cost-effective in terms of both staff time and purchase price.”

The last week we wrote on a report about the proliferation of Conviction Integrity Units.

Phil Locke, who is one of the co-directors of the The Wrongful Convictions Blog and an advisor to the Ohio Innocence Project and Duke Law Wrongful Convictions Clinic, wrote on Friday, “We can do nothing but applaud these efforts, but there is one aspect of these units that troubles me.  They are all totally contained within the prosecutor’s office.  Does anyone else think this presents an inherent conflict of interest?  My suspicion is that, because of increasing publicity about wrongful convictions, prosecutors are establishing these things to politically bolster their public image. Call me cynical – and we should welcome every step toward true justice – but I tend to see a fox guarding the hen house and a wolf in sheep’s clothing.  Is there any requirement that all proceedings of these units be public record?”

He adds, “My belief is that the model for how these units should be set up is the North Carolina Innocence Inquiry Commission, which has been in operation since 2007.  What I think is notable here is the composition of the commission: the members include a Superior Court Judge, a Prosecuting Attorney, a Defense Attorney, a Victim Advocate, a Member of the Public, a Sheriff, and two Discretionary members.  This shows a reasoned effort to endow the commission with objectivity.”

This is a point some of our readers have raised as well. Overall, I think internal processes are important, but they also require independent review capabilities and that is the feature that most seems to be missing. This is a similar point raised in the discussion of police oversight and the need for an independent body to have jurisdiction about use of force and officer involved shootings.

If You Like What We Do – Become a Subscriber

It is really simple – we spent about $22,000 last year on two new websites, one that we replaced after ten months of operation. That is paid off, but there are a lot of things we want to do to expand and improve both the website and what we do with the website.

We have a great and amazing base of support that has enabled us to finance these changes. I want to personally thank each and every person who donated in 2014 – whether it was $10 or $5000.

However, what we want is to build in a mechanism so we don’t have to come to our readers every time we have an emergency.

The easiest way to do that is become a monthly subscriber. We’re not asking for much. For the cost of as little as $10 a month, you can help to keep the Vanguard going.

The math is simple. Our typical article receives between 1000 and 2000 unique reads.

If everyone who reads this post could pledge just $10 per month, we would meet all financial goals for 2015 and the Vanguard would be fully fiscally viable.

So what do you say? Please donate today by clicking on the link.