On Wednesday, December 17, at 6:30 pm, the second Jumpstart Davis meetup will be hosted by Sophia’s Thai Kitchen. It will feature Bob Fung of Voterprep.org and Kyle Cobb of Greenbotics. Last week, we profiled Voterprep.

According to its press release, “With this strategic acquisition, SunPower expands its energy services portfolio for global customers with the SunPower Oasis Power Plant product, especially in markets with challenging dirt and dust environments. SunPower expects to utilize the robotic technology and the Greenbotics team in conjunction with other product development and large-scale solar field installation projects.”

Greenbotics was billed as “a leader in optimizing the performance of solar power plants through a cost-effective cleaning process. For the past two years, the company has used its proprietary CleanFleet™ robots and service offerings to wash hundreds of megawatts of systems in the Southwest and Western U.S. The robots can be configured for use with a variety of solar panels and mounting types, including fixed-tilt arrays and single-axis trackers and offer a less costly and greener alternative to manual cleaning methods, pressure washers and sprayer trucks. The robots use under a half a cup of water to clean each panel, which is approximately 90 percent less than traditional cleaning methods, making this solution optimum for solar systems built in desert conditions.” 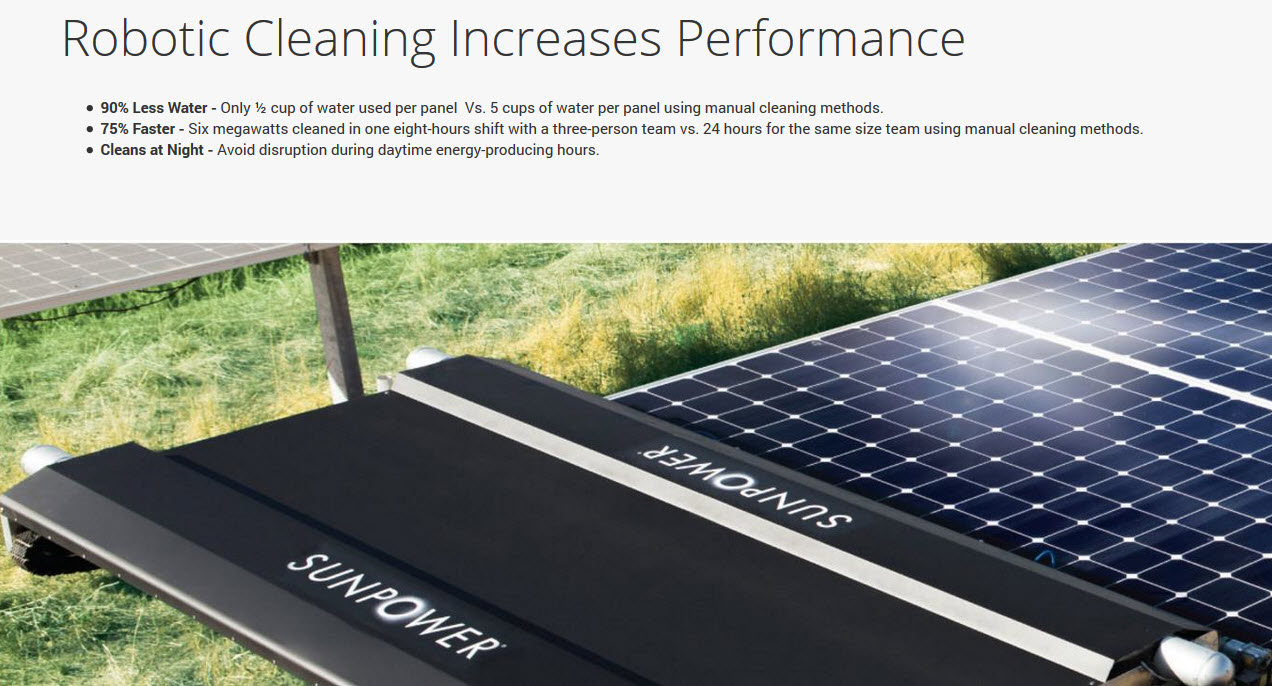 “SunPower’s acquisition of Greenbotics and its CleanFleet robots will allow us to further maximize the proven system performance of our high efficiency, most reliable solar panels, which is critical to a project’s economics and levelized cost of electricity,” said Tom Werner, SunPower president and CEO. “Customers in markets such as the Western U.S., the Middle East and Chile will especially benefit, as dust and debris is a challenge and water is in shorter supply. We are very pleased to add the valuable services offered by Greenbotics to our energy services offerings.”

The CleanFleet robots can be tailored specifically for each power plant to optimize a project’s cleaning schedule. Most panels are cleaned at night to avoid disruption during the daytime, energy-producing hours. Regularly cleaning solar panels located in dry, dusty regions can increase annual energy production by up to 15 percent. 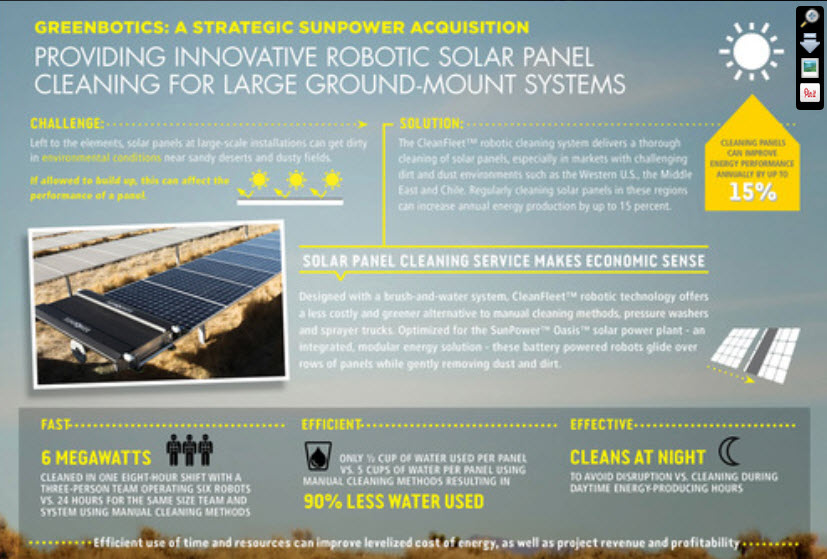 They ran the business for 26 months before being acquired by SunPower last year. They started in Davis in August 2011.

Mr. Cobb said that SunPower was one of their first customers and slowly began to take an interest in Greenbotics technology as it became more mature. “We did some work for them and eventually realized it could be a very good partnership,” he said, “to not only be the customer-vendor, but to fully integrate the technology into their power plant solution.”

“We’re continuing to run the business as part of SunPower more broadly,” he explained. “Still doing a lot of the same stuff, the same products.”

They still have an office in Davis to grow the part of the business that they work on. The rest of SunPower is based in Richmond and San Jose.

As product manager, Kyle Cobb continues to do a lot of the product marketing and growth strategy.

Mr. Cobb said his co-founder Mark Grossman, working in a solar company at the time, noticed that as the solar power plants increased their size and capacity in the desert, they needed a cleaning solution.

Manual cleaning did not make much sense in terms of financial costs as well as water use, “As they solar plants were getting bigger, we identified a need to automate the cleaning process. By automating the cleaning process, we found you can really reduce water and labor and as a result, bring the cost of cleaning down to the point where it makes much more sense to clean much more frequently than you would do with manual cleaning.”

The solar market was booming in late 2011 and “we decided to ride the wave as solar partners and we went for it.”

Mr. Cobb noted that Jumpstart Davis is “very much a networking event and I think that a lot of the success that I’ve had personally and also that our business has had really boils down to individual relationships.”

He added, “I think that my discussion on Wednesday will be about valuing each one of these conversations that we have, valuing this community that we have in Davis, and helping each other reduce the risks in our business to make sure that we can take full advantage of being entrepreneurs and enhancing our chances of success.”

You can learn more about Kyle Cobb, Greenbotics and SunPower as well as other startups on Wednesday, December 17, at 6:30 pm at Sophia’s in Davis.

Share:
Tags:GreenboticsJump Start DavisMeetupSolarStartupsSunPower
Previous : Eye on the Courts: Marsh Gets 52 to Life, But Not Really
Next : City Looks to Improve Richards Boulevard Interchange