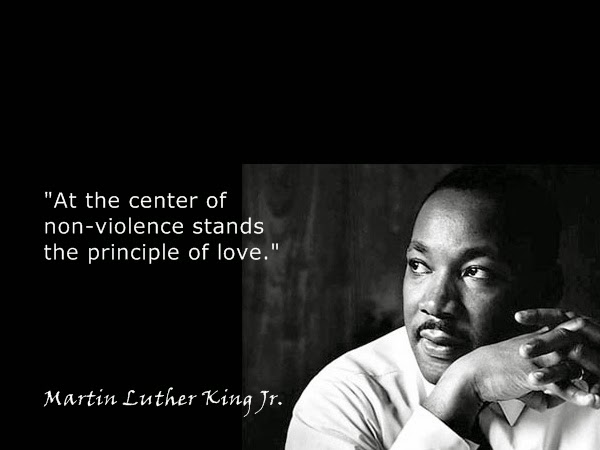 “Nonviolence is a powerful and just weapon. which cuts without wounding and ennobles the man who wields it. It is a sword that heals.” – Martin Luther King, Jr.

The nation was horrified to learn that a gunman shot and killed two New York City police officers before taking his life in an execution-style ambush in broad daylight in Brooklyn yesterday afternoon.

“It’s clear that this was an assassination,” New York City Mayor Bill de Blasio said at a news conference Saturday night. “These officers were shot execution-style, a particularly despicable act which goes to the heart of our society and our democracy.”

“Two brave men won’t be going home to their loved ones tonight, and for that, there is no justification,” President Barack Obama said. “The officers who serve and protect our communities risk their own safety for ours every single day–and they deserve our respect and gratitude every single day.”

Naturally, the attack on the police officers will only serve to heighten tensions in this nation already divided over the response to recent killings of unarmed black men by police officers in Ferguson and Staten Island.

To make matters worse, the gunman had announced his intentions on Instagram to kill the police officers in retribution for the police killings of Michael Brown and Eric Garner.

Al Sharpton on Saturday afternoon released a statement. He said, “I have spoken to the Garner family and we are outraged by the early reports of the police killed in Brooklyn today, Any use of the names of Eric Garner and Michael Brown, in connection with any violence or killing of police, is reprehensible and against the pursuit of justice in both cases.”

He continued, “We have stressed at every rally and march that anyone engaged in any violence is an enemy to the pursuit of justice for Eric Garner and Michael Brown.”

“We have been criticized at National Action Network for not allowing rhetoric or chanting of violence and would abruptly denounce it at all of our gatherings,” he added. “The Garner family and I have always stressed that we do not believe that all police are bad, in fact we have stressed that most police are not bad.”

There are a lot of lessons we can take from these last few months, but for me, the enduring images of the “hands up, don’t shoot” and “black lives matter” movement are not the burning flames in Ferguson following the Grand Jury decision, nor the brazen yet cowardly act of violence we witnessed yesterday, but the iconic and moving images of people of all walks of life expressing their solidarity for the moment.

The enduring images of the civil rights movement from half a century ago and more are the peaceful protesters who did not fight back when Bull Connor turned his dogs and his fire hoses on them.

It was the unyielding faith in God and a notion of Christian love that imbibed the civil rights movement with its power to change a nation. It was their sense of faith and conviction that allowed them to turn the other cheek as they were beaten and to love their enemy as their adversary tried to break them down and destroy their spirit.

Violence is not power. Violence in fact is used in the place of power when we are at our weakest moments. True power is turning anger and hatred into love and compassion. “Love your enemies, bless them that curse you, do good to them that hate you, and pray for them which despitefully use you, and persecute you.” That is true power.

As President Obama said, “I ask people to reject violence and words that harm and turn to words that heal — prayer, patient dialogue, and sympathy for the friends and family of the fallen.”

We have now come to a crossroads. We can use this moment to come together for common purpose — to reject violence and hatred, to work together for mutual understanding, and to address our grievance in productive and non-violent ways.

Or we can use this incident to create further polarization between the races. Polling showed that while 51 percent of whites were pleased or satisfied with the Grand Jury decision, only 13 percent of blacks were and 82 percent were disappointed and angry.

Previous Pew Research center surveys have found that, even before the deaths of Brown and Garner at the hands of the police, blacks expressed far less confidence than whites in local police forces to treat blacks and whites equally.

Pew found that only 21 percent of Americans expect relations between local police and minorities to improve over the coming year. By about three-to-one, more blacks think police-minority relations will get worse (52 percent) than better (16 percent) over the course of the next year; 31 percent say they will stay about the same. Whites are more narrowly divided, with 34 percent saying relations will get worse, 21 percent better and 43 percent about the same, the same survey found.

We now truly are at a crossroads. The shooting of two police officers in New York is tragic, it is inexcusable and it counter-productive. There will be plenty of fingers pointed in the aftermath.

We need to remember that this nation remains bitterly divided along racial lines, but we have made progress. What has emerged in the aftermath of Ferguson and Staten Island and others is not something new, it is long-dormant and suppressed anger and frustration in the black community.

I think President Lincoln’s First Inaugural Address embodies the spirit of where we need to go: “We are not enemies, but friends. We must not be enemies. Though passion may have strained, it must not break our bonds of affection. The mystic chords of memory, stretching from every battle-field, and patriot grave, to every living heart and hearth-stone, all over this broad land, will yet swell the chorus of the Union, when again touched, as surely they will be, by the better angels of our nature.”

108 thoughts on “Sunday Commentary: Violence is Not the Answer”