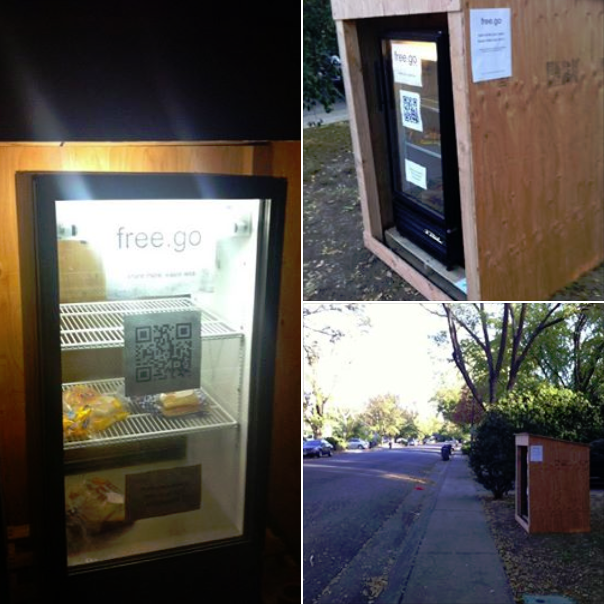 Last week a Vanguard reader, Ernst Bertone, wrote an article for the Vanguard that we decided to post. Little did we realize the article on food sharing in Davis and the UC Davis students’ subsequent battle with the health department would resonate with our readers to the tune of thousands of views and 61 comments.

Mr. Bertone wrote, “In the past few weeks we performed a food sharing experiment in our neighborhood, installing a public refrigerator in our front yard (at 812 Douglass Avenue in Davis, CA). Over 29 days of operation, 122 food items were exchanged, an average of about 4 items per day! In the last days of operation we also had 3 books being shared, which led us to the creation of a space dedicated to book-exchange.”

He adds, “The name of this project is free.go. Our goal is to reduce food waste and build a stronger community through food sharing; we receive no profits, or personal benefits (except for some tasty items that show up in the fridge and need to be consumed fast…). This is an idea starting in Davis, but we recently heard that similar projects are happening in other countries… you might say: convergent evolution!”

Last night CBS13 in Sacramento picked up the story.

“An unusual idea to cut down on food waste has drawn the ire of the Yolo County health department. Grabbing a snack has never been so controversial. On a front lawn in Davis is a food-sharing refrigerator, now banned by Yolo County,” CBS 13 reporter Steve Large reported.

According to the report, Ernst Bertone and his roommates broke the law, according to the health department, when they put a refrigerator on their lawn with a sign reading “Take what you need, leave what you don’t.”

“The UC Davis students’ experiment proved a success as people shared,” the report stated. “Bertone and his roommates charted it all, posting photos of the food people put in the communal fridge and what they took out. They kept a database that showed 122 items were shared over 30 days.”

CBS added, “The neighbors liked it and even used it. But someone complained, prompting the health department to shut down the sharing fridge. The rationale? The open refrigerator doesn’t assure safe and pure food, and it can lead to people getting sick.”

“The law just hasn’t thought of something like this before I think. It’s a new idea,” said Eric Yen.

“For now, it’s a new idea that’s against the law, leaving the fridge off the lawn and out of order,” the report concluded.

On the Vanguard, posters were concerned about issues such as aesthetics and liability.

“This is a terrible idea, Davis doesn’t need ugly looking refrigerators sitting outside in the front of houses all over town,” one poster wrote. They added that “aesthetics is a large part of the problem. I wouldn’t want my neighborhood to have refrigerators sitting out front on my neighbor’s yard. I can’t imagine driving around town and seeing refrigerators everywhere, how ugly. Besides that, there has to be a huge liability risk of giving out food that one doesn’t know where it came from.  If the city ever okayed something like this would they also be liable?  When I go to a grocery store, a restaurant or my friend’s house for dinner I have a reasonable assumption of the food being safe, but a set up like this where anyone can put food in a fridge sitting out on the curb is a whole different animal.”

“How safe is the food inside free.go?” Mr. Berton wrote. “Most of the food shared in the fridge is non-perishable, like canned vegetables, canned juice, candies, packed cereals, uncooked pasta, tea bags, coffee, etc. Perishable items are also shared, but they normally don’t stay long.”

He added, “Products with higher contamination risks such as fresh meat are rare, and when they appear we only leave them there for a couple of days, or until their posted expiration date. We perform regular safety checks on the fridge, at least twice a day. We look for expired items and items that look “suspicious.” The fridge is cleaned at least once a week. The risk of food contamination is therefore very low, but of course not zero.”

In response to some criticism, Mr. Bertone noted that aesthetics is a point they have to consider. “Lately we painted the wooden box that protects the fridge in green, so it became much less visible. We were also planning to let artists expose their work on the box, so it would become an evolving art work.”

Liability is another issue, “I heard this point many times already, and I think it’s something we need to work on.”

Click here to see the Sacramento CBS 13 newscast on this issue: