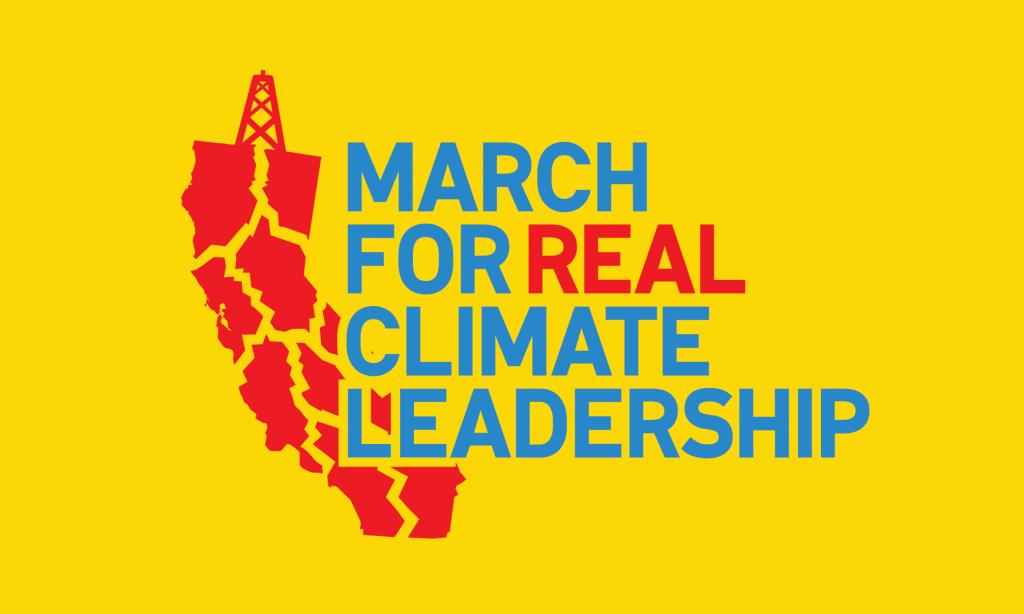 On Saturday, Feb. 7, thousands of people are expected to take part in the March for Real Climate Leadership: Our Water, Our Health, Our California. The march, organized by a broad coalition of environmental groups across California, demands that Gov. Jerry Brown take real action against fracking.

Californians Against Fracking, one of the event organizers, states, “If Jerry Brown wants to be a real climate leader, he must stop enabling the biggest climate polluter by yanking his support of oil refinery expansion, blocking dangerous bomb trains, and putting a ban on fracking and other forms of dangerous and toxic fossil fuel extraction.”

Advocates claim that Californians are threatened by fracking in numerous ways, including exposure to toxins for those living near drilling sites, potentially explosive trains carrying crude oil through populated areas, air and groundwater pollution, and increases in overall methane emissions.

Hydraulic fracturing, or fracking, involves injecting water and chemicals deep underground to break up rock and release oil and gas. It is an extremely water-intensive practice, using hundreds of thousands to millions of gallons of water to frack a single well. It utilizes a mixture of chemicals, many of which are toxic or are known to cause human health problems.

The practice also produces large amounts of wastewater that must then be disposed of. The wastewater contains harmful components such as high salt content, naturally occurring radioactive material and heavy metals such as arsenic.

Recently in Kern County, wastewater from at least nine fracking wells containing high levels of arsenic, thallium and nitrates was injected into high-quality water aquifers, making the water unsuitable for drinking or irrigation.

The March for Real Climate Leadership’s website (www.marchforclimateleadership.org) states, “The California climate movement is showing up in force on Governor Jerry Brown’s doorstep, to let him know he is not a climate leader if he continues to allow fracking to expand in California. Amidst the worst drought in California history, expanding fracking and shipping in tar sands and oil from the Bakken shale, is not climate leadership, it’s more of the same.”

February’s planned march follows a similar one that took place in New York last fall, where an estimated 311,000 people participated, including former Vice President Al Gore; United Nations Secretary General Ban Ki-moon, who presided over the U.N. climate summit; and Mayor Bill de Blasio, who recently announced that he was committing the city to an 80 percent reduction in greenhouse gases by 2050.

Yolano Climate Action, a local organization whose purpose is to bring together groups and individuals concerned by the climate crisis, is organizing ways for Yolo County residents to participate in the march, which will begin at 11:30 a.m. in Oakland at Frank Ogawa/Oscar Grant Plaza.

“As a climate activist, I need to surround myself periodically with hundreds of other like-minded individuals who care enough about our obligation to the future of this imperiled planet and the life on it to devote their time to slowing climate change,” says Cool Davis board member Lynne Nittler.

“I attend marches like the Feb. 7 anti-fracking march not just to communicate to our governor that many of us want him to ban fracking, but also to remind myself that a movement is steadily building, swelling in numbers and growing wiser in strategy even as the urgency of action increases.”

On Saturday, Jan. 31, a stencil/poster making party will take place from 10:15 to 11:30 a.m. in the Blanchard Room of the Stephens Branch Library, 315 E. 14th St. in Davis. All are welcome and encouraged to bring any of the following: a white board, poster board or cardboard, colored felt markers and their verbal cleverness and artistic talents.

Some white boards, X-acto knives, scissors, rulers, felt markers, chalk and stencils will be provided. (Stencils Against Fracking has teamed up with the March for Real Climate Leadership and has designed a limited-edition stencil for use to encourage communities to come to the march.)

The group is also helping to coordinate bus and train transportation to the event.

* Buses: Three buses leaving from Sacramento will pick up passengers in Davis at 8:30 a.m. at the park-and-ride lot near Ikeda’s fruit stand at Mace Boulevard and Interstate 80. They will arrive in Oakland with enough time for people to get food and use the restroom and will return to Davis approximately 7:30 p.m.

Bus tickets are $15, with a few available for $3 for those who need them. You can get more information and buy your ticket at www.eventjoy.com/e/bus-to-oakland-climate-march-sac–davis-825128.

* Train: Multiple Amtrak trains leave Davis and arrive at Jack London Square. The Amtrak station is about a one-mile walk from Frank Ogawa/Oscar Grant Plaza, where the rally begins and is about a 15-minute walk from Laney College, where the rally will end. Round-trip fare is $54 general or $50 for senior citizens.

Many Davisites are planning to take the train that departs Davis at 9:30 and arrives at Jack London Square at 11:06 a.m. For a full list of train schedules, visit the Cool Davis website at www.cooldavis.org.

For more information about the event, or to learn ways you can get involved, contact info@cooldavis.org.

55 thoughts on “Marching For Climate Change”