The mayor went down a list of accomplishments from 2014, starting with economic development which included two innovation center projects and Nishi. He talked about Rob White and the RFEI (requests for expressions of interest) process that generated the two projects. “My sense is that we’re really at a tipping point right now in terms of our view of economic development,” he said. He added that, at the next meeting, the project description of Nishi comes forward to the council and he expects that to go forward as well.

Mayor Wolk discussed the new council, the election of Robb Davis and the hire of Dirk Brazil. “We are really lucky to have Dirk (Brazil),” the mayor said. “Not only does he have the experience but he has the history with the city, he went to school here at UC Davis and never left. He has really deep understanding of the community.”

“Between our new city council and our new city manager, we really have a well-functioning team here,” he added. “There’s a feeling that’s pervading city hall right now that things are really good. People are really optimistic. I think that’s a significant thing that happened in 2014.”

He also sang the praises of Cannery, which he said “reestablishes Davis as a leader in innovative housing.” The mayor said that we have two demographical issues in Davis. The cohort of those between 25 and 45 years old, “that demographic is shrinking. That really is concerning for the future of our city.” On the other hand, he added, “the cohort, our seniors, that age group 55 and over, that’s the fastest growing cohort in our city.” He said we need to think about both those groups and that’s what Cannery does.

Mayor Wolk said that the city was hit hard by the Great Recession, “but we’re emerging. We had a 25 percent reduction in employees, our employees had to take a number of concessions, cuts.” He said, “But things are getting better. We ended last year at $850,000 more than we were expecting. That isn’t considered one-time money. This recovery has legs.”

“We are on our way to eliminating our structural deficit,” he added. 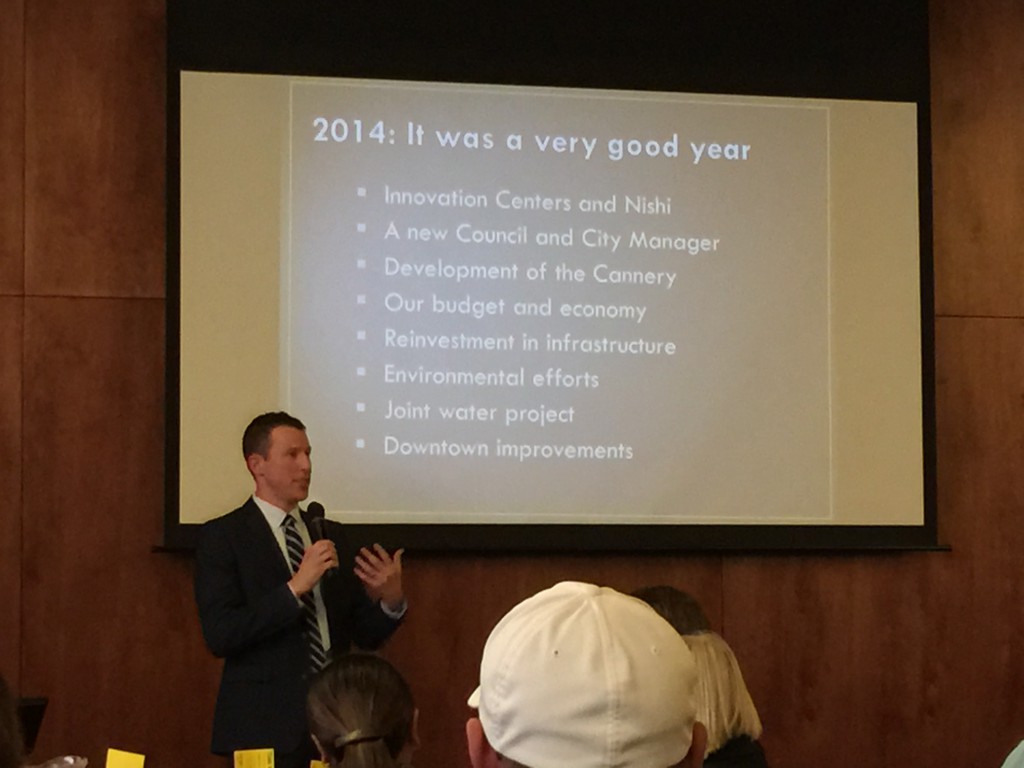 He noted, that “we managed to put away $4 million of our general fund… for infrastructure. We need to be doing more, but it’s a good start.”

“This is a very sound city budget that we have,” Mayor Wolk said.

On environmental efforts, “I think the biggest thing is that we banned plastic bags – that may not be the most popular thing with everyone in this room – but we banned them and so did the state,” Mayor Wolk explained. He noted the referendum that has made the ballot statewide, “but that won’t affect the city of Davis.”

Dan Wolk noted that when he got appointed to the city council back in 2011, he had a number of questions asked about him, and “not one question was about water. And since I’ve been on the council, I feel like every waking moment of my life has been about water.” He noted that Measure P passed last year which “got rid of the dreaded CBFR rates that caused a lot of controversy.”

“We have now adopted a rate schedule that’s fair, that’s easy to understand and has most importantly public buy-in,” he said. He also noted we qualified to get SRF (State Revolving Fund) funding, and “that’s going to translate into millions of dollars of savings to our ratepayers. So going forward we won’t likely have to have the rate increases that were predicted.”

Finally, Mayor Wolk noted that we settled the lawsuit that threatened to undo the project.

Mayor Wolk also talked about the Fifth Street road diet – another controversial topic in the room. “We’re kind of seeing how that plays out,” he said. “So far the results have been good, but I think it really takes a while for folks to get used to that… Certainly, the sky didn’t fall on that project.” He noted that he bikes down Fifth Street, so he really appreciates the change.

He quoted from Newark Mayor Corey Booker, “We drink from wells that we did not dig.” From Mayor Wolk’s perspective, “Previous generations give a lot to our community… so that all of us in this room can benefit from that. I think that we have an obligation… to pay that forward.”

“We have significant challenges that go well beyond our time in this community and we need to be willing to make the sacrifices to ensure that future generations have the same things that we benefited from,” he added.

He said that’s the theme not only of his service on the council but as we think about 2015, “that’s really what I want us to be. My conception of that is ‘Renew Davis.’” 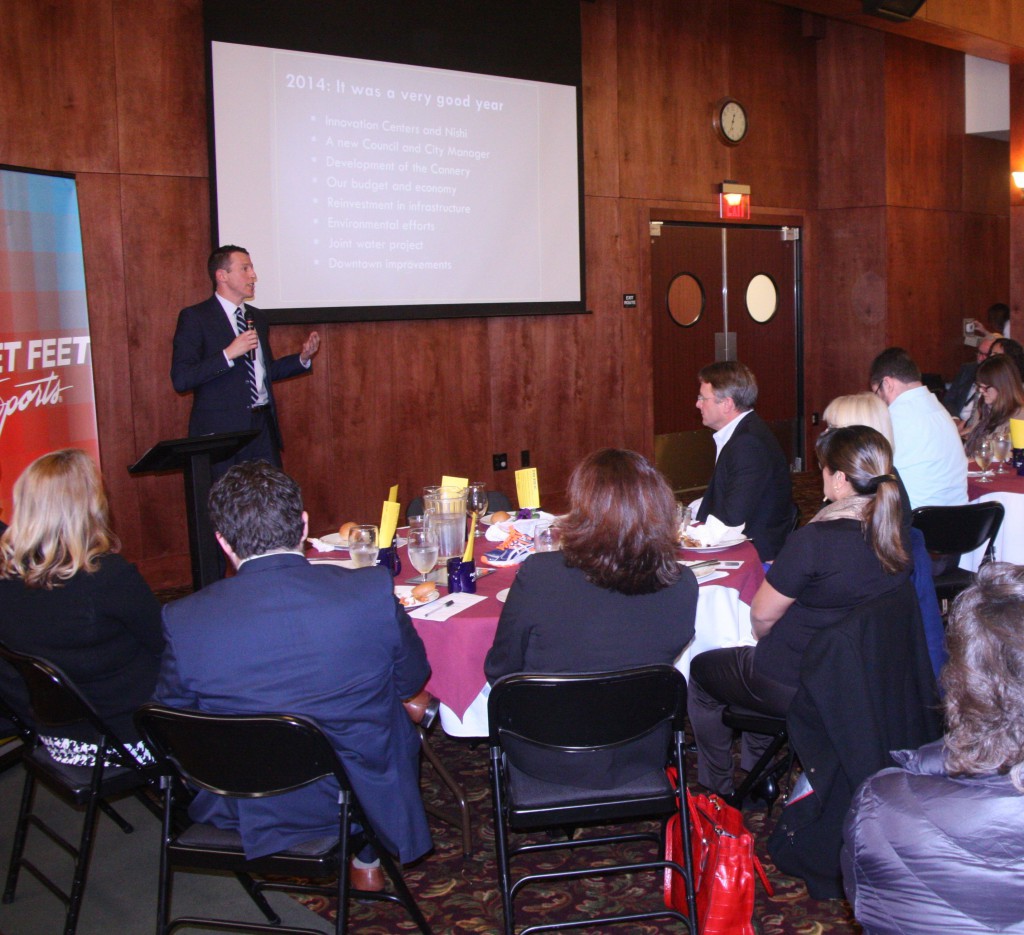 Mayor Wolk talked about economic development and UC Davis. “We need to renew our commitment to the idea of the university, but bring it to the next level and that’s really what these innovation centers and Nishi are all about. That’s about harnessing the technology that’s coming out of the university, not only incubating it here, but growing it and having it stay here long-term, so that we can have highly skilled workers, graduates of UC Davis, stay here in our community.”

“If there’s one thing that has really thrived in the last year, it’s this Jumpstart Davis effort which really has the potential – the entrepreneurial energy is there, but it really needs to be harnessed and strengthened,” he said. “We have Jumpstart Davis, Davis Roots.”

Mayor Wolk noted that we have significant deferred maintenance in our roads, infrastructure and pools. He noted the leak in the Civic Center pool which he said highlights this problem that we have. “Davis in a recent study of Yolo County has the worst roads,” he said. “We have a lot of significant infrastructure issues. The problem is that this takes a lot of resources.” These costs have fallen on our local government.

Dan Wolk also took a few audience questions. He explained that right now the city has two innovation center proposals and Nishi. CEQA (California Environmental Quality Act) work and other studies are occurring on these projects.

“If everything goes according to plan, the studies will get done by the end of 2015,” he said. Right now, he said, those schedules have it so that they all go to the ballot in Spring 2016. “I have no doubt that something will go on the ballot in Spring 2016. I think it’s premature to discuss what exactly is going to happen because we just don’t have those studies back yet.”

“But at least for me,” he said, “all three of those would be wonderful additions to our community.”

He said you have to think long term, but he said it’s important to look at the environmental studies and absorption rates before making final decisions. 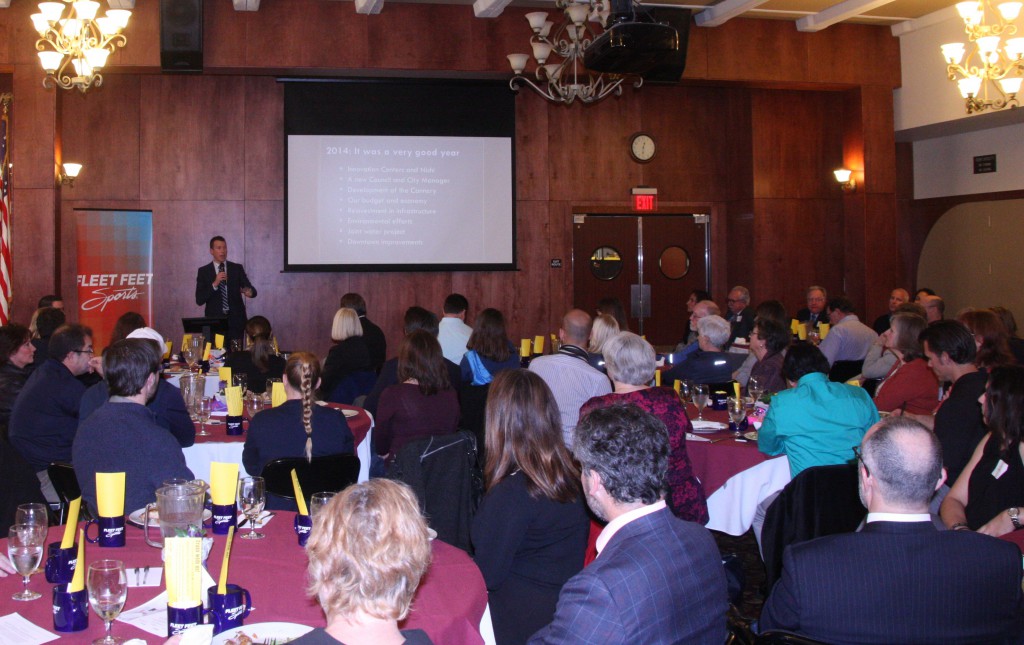 Mayor Wolk did not directly address the $15 per hour proposal but said that Mayor Kevin Johnson of Sacramento has convened a task force that will look into the issue more and he thinks that will be informative.

“I think Davis is going to benefit from the work that’s done by that task force,” Mayor Wolk said.

He said he’s very supportive of raising the minimum wage, but also cognizant that this will impact small businesses. “So for Davis to raise it without other cities, without it being a statewide effort, there are concerns with that,” he said.

Mayor Wolk noted that in recent years Davis has begun to flex its muscles regionally. “With the innovation centers people are really [seeing] that Davis really is beginning to do some things at our regional level,” he said. “I think we really need to do more of that.”

He said he wanted to see the councilmembers pushing for us to do more at the regional level and partnering with others in our region.

“The bottom line,” he said, “is the state of the city is very strong and we’ve got a really bright future.”