In my time, observing the Davis community, I see two destructive but countervailing trends at work. There are those who appropriate the aphorism from philosopher Voltaire, “The perfect is the enemy of the good,” and will accept decent proposals for projects without pushing for greatness.

On the other hand, there is a tendency, sometimes interestingly enough within the same population group, to look at proposals and point out their flaws without looking for ways to improve those flaws and fix the potential downfalls. The flaws become a convenient excuse not to attempt a new concept.

We saw this at work yesterday in two separate articles – one submitted by a reader which put forward the concept of food-sharing and the other that looked at examples of car-less communities in other cities and pondered whether Nishi could be conceived of as a car-less community.

Ironically, an article entitled, “The Art of the Possible” became a litany of excuses of why we could not do this. One reader presented a number of challenges prefacing their comments, “I am all for attractive, modern, smart developments that incorporate best-practice planning and design.” And yet, it seemed they opposed these concepts every step of the way.

So the first question they posed was who would live at Nishi if it were car-less. A reasonable question. One of the interesting things is if you make it a car-less housing project, people without cars are more likely to live there. Given that the housing development is going to be next to the university, with relatively small housing units, while it might not be billed as student housing, for the most part it is going to end up as student housing.

So one question we should probably research is how many students even have cars. We know that a high percentage of students who live in Davis are taking alternative transportation means to get to school. Our December 29 article noted that 47 percent bike, 18 percent use the bus and 4.9 percent walk, while 23.9 percent drive alone and 5.3 percent carpool. So there would seem to be a ready-made population.

We also know that UC Davis is expanding its overseas student population and almost all of those students will not have cars on campus.

So when the commenter writes, “Most of the kids I know that are attending college have to work.  And with the hyper-inflationary cost of college, more and more of them have to work.  And downtown Davis does not have enough jobs to support the job need, so they have to drive somewhere to work. Also, Davis has limited shopping options and this too requires car travel.”

While some of that may be true, there is already a sizable UC Davis population that is figuring out how to make that work without cars. For me that is the real point – these are excuses not to do something new and innovative. We are not talking about Davis going car-less, we are talking about one housing development perhaps not needing to have cars.

We saw the same thing with the reader-submitted article on food sharing. I’ll be honest, I don’t know exactly what I think about food sharing and the concept, but the first comment set the tone – “This is a terrible idea.”

Cited reasons included, “Aesthetics is a large part of the problem.” Then came the liability risk (which is still unclear).

The commenter stated, “When I go to a grocery store, a restaurant or my friend’s house for dinner I have a reasonable assumption of the food being safe, but a set up like this where anyone can put food in a fridge sitting out on the curb is a whole different animal.” True, but perhaps it becomes a calculated risk that, if you engage in food-sharing, you accept the risk that there might not be the quality control you have at grocery stores.

I was impressed that the original author came back to discuss many of these points and look to improve upon them. But I was disappointed that the overall direction of the conversation was to list reasons not to do it, rather than examine ways to make it work.

“From what I understand, this guy has been told numerous times to remove it and he refuses,” one poster wrote. “If they want to give away food, have people knock on the front door and make the exchange.  You know, knocking on the door and asking to borrow a cup of sugar, for example.  This is how it was done in the past.  But that would require face to face meeting with your neighbors and not the anonymous system you are trying to set up.”

Again, I am not necessarily saying that this is a good idea or that I would want to participate, but our automatic reaction to anything new is to poo-poo it rather than test the possibilities.

And testing the possibilities are really what I want to see us as a community do. I am going to go back to the Nishi example, because I see potential there. There are also clear obstacles such as circulation issues and we do need to examine the air quality issues, as well.

But overriding those concerns is that fact that Nishi is a very confined space, it is close in proximity to downtown and the university, and it does not expand our borders on the periphery of town. So it offers us a range of opportunities that no other parcel of land offers.

I have had several conversations this week with members of council about the potential of Nishi and my disappointment that council, while raising important issues about timing and what the EIR should entail, really wasn’t articulating a vision for the project or publicly pushing the applicant to go further.

I was just reading about the USC Village at the University of Southern California. I don’t think the specific concept is what we want at Nishi, but the innovation is what I think we should be shooting for. 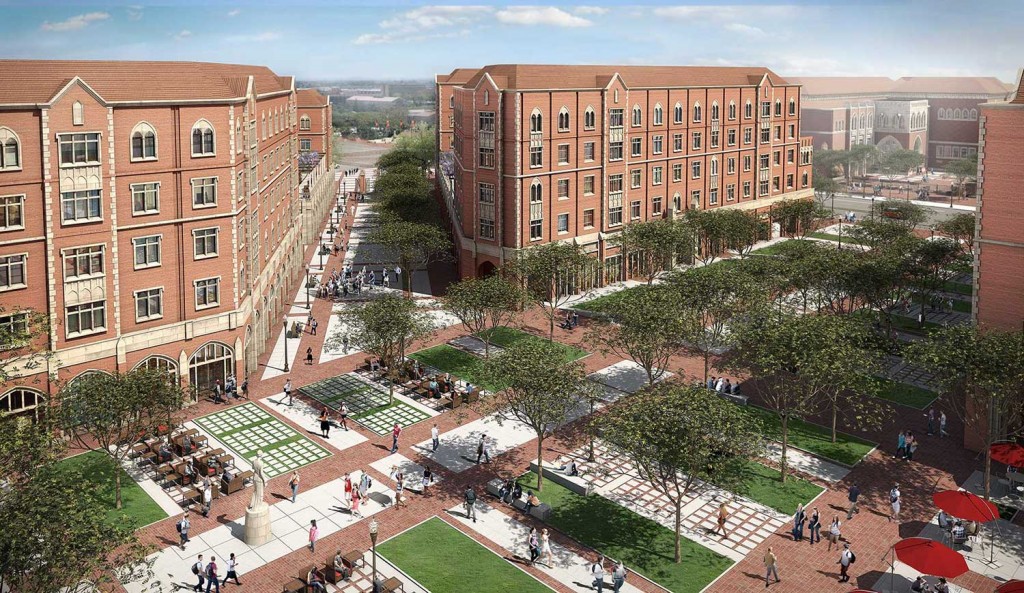 The USC Village is only 15 acres, which is roughly one-third the size of Nishi. So we can actually do a lot more than what is even happening at USC.

They are clearly focusing at USC on retail rather than research and innovation, but some of the concepts we could extend to Nishi: “With conveniences that include a full-service grocery store and 100,000-square-feet of additional retail, USC Village will have all the amenities and comforts of a town center for students and neighborhood families, set amid vibrant green spaces for open recreation. The retail planned for the USC Village include places for dining, entertainment, shopping, and evenings out with friends.”

One article, from the fall, wrote, “Imagine a bustling, welcoming residential community where Trojans can eat, sleep, study, play, dream, mingle and, above all, discover themselves. Picture inviting residence halls with private courtyards opening onto an inviting town square. A scholarly enclave churning with possibilities—outdoor concerts, poetry readings, street theater. A place where undergraduates can hang out with distinguished faculty outside the classroom.”

They added, “USC Village will bring this vision to life—and revolutionize the landscape of the university. This 1.25-million-square-foot, residential-retail center on the north side of the University Park Campus will feature a cluster of five-story residence halls encircling a grand plaza that will form the pinnacle of student life at USC. For up to 2,700 students each year, USC Village will be home away from home.”

Now USC itself is investing $650 million into the USC Village.

“This is by far the biggest thing USC has ever done, and probably ever will do,” said USC President C. L. Max Nikias, who spearheaded the USC Village planning effort. “We are growing to the north in a big way. USC Village will no longer be adjacent to the campus. It will be the campus.”

The article noted, “It’s not only USC’s largest building project; it’s the most expansive development project in the history of South Los Angeles. In their initial reviews, city planners projected it would pump $5.2 billion into the local economy.”

Stop right there. This is a 15-acre site that USC thinks could pump $5.2 billion into the local economy. We have a 44-acre Nishi property.

Again, I am not suggesting we replicate this in Davis – I think we can do other things. I am suggesting that the current plan is small by comparison and, given the unique nature of the Nishi site and the amount of research and innovation that UC Davis is wanting to bring into our community, we should think big – if we are going to do this.

I believe we can do this as an environmentally sustainable and innovative way that preserves the core values of our community.  Are there challenges? Of course. But instead of using those challenges as a reason to not do something great, let us think of creative ways to address those challenges to make this greater.

Share:
Tags:BicyclingCarsCirculationDavis DowntownMeasure RNishiUC Davis
Previous : Commentary: No, This Wasn’t a Job for an MRAP
Next : My View: Bomb Threat is Scary, But Real Dangers Lurk

53 thoughts on “My View: Slouching Toward Mediocrity”