If one had never had the fortune to hear the Reverend Martin Luther King, Jr. speak live, one might have gotten a sense for the power, emotion and vision while listening on Monday morning in Davis to the Reverend Tim Malone deliver a tour de force that brought the overflow crowd to its feet and moved many to tears.

Reverend Malone told the story of his father who had served in World War II. He came back from the war to Pittsburgh. He was on a bus, buses were not segregated in Pittsburgh, and he was in full uniform. There were two seats left when a young white woman and her little daughter came in the bus.

The little girl hesitated to sit down next to him and when the mother implored her daughter to sit down, she finally said, “I’m not sitting down next to that N–.” “The mother was embarrassed,” Reverend Malone said. “My Dad’s heart sank. He said from that moment on he was never the same. He realized he was fighting really the wrong war. The freedom that he fought for those in Europe, he did not have in his own country.”

“He became an activist,” said Tim Malone. There was a swimming pool in Pittsburgh that Tim Malone swam in and at one point that pool was a white-only pool. His father became the first African-American ever to swim in that pool. They had to have guards to let him get in to swim. And guards for him to get out. “My father was never the same,” he said. 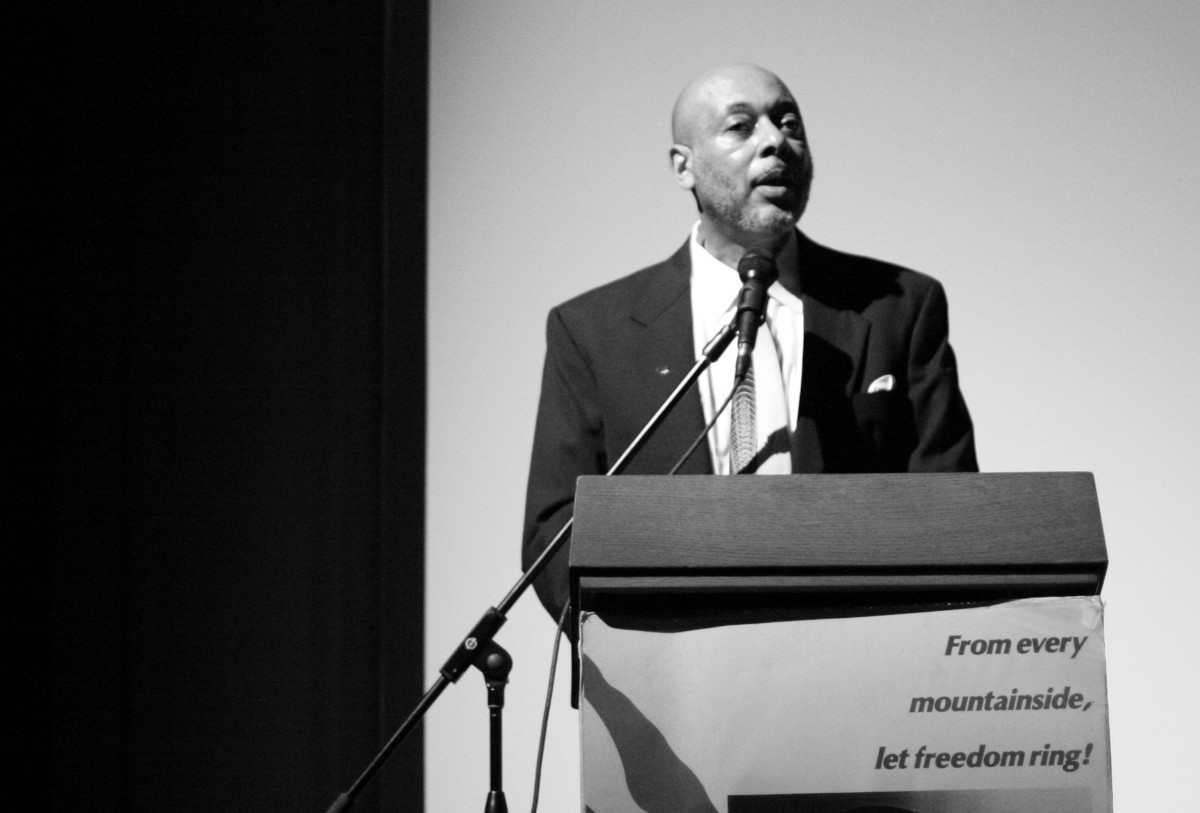 “Dr. Martin Luther King Jr. grew up in an extremely violent and segregated environment. He grew up in a world where black lives meant nothing,” Reverend Malone said.

He told the story about a young Martin Luther King who used to go across the street to play with his white friends. But one day, his father wouldn’t let him play with his friends. Martin was upset and couldn’t understand. He asked his mother, and she said, “Martin, some people don’t treat other fairly.”

“Martin Luther King looked up at her and said, ‘Mama one day I’m going to change this,’” Tim Malone said.

Less than a month later, his house was bombed. “A crowd of angry men and women gathered around the house and they brought their guns, and they said, we’re not going to let them get away with this. We’re going to fight fire with fire,” Mr. Malone said. “Dr. King courageously and bravely stood up and front and said, no we worship Jesus. And Jesus said love your enemies, pray for those who persecute you.”

“A newspaper man recorded it and the people slowly left and took their guns back home,” he said. “Thus began the non-violent civil rights movement of the modern era.”

“I can’t even imagine, Dr. King had almost 50 death threats a day,” Tim Malone said. “He lived under the threat of death for 13 years. From the beginning of the Montgomery Bus Boycott until he was assassinated on April 4, 1968, in Memphis, Tennessee.”

“Amazing pressure. The FBI followed him wherever he went, once Bobby Kennedy gave J. Edgar Hoover the authority,” he said, noting that he gave him only limited authority. “J. Edgar Hoover gave himself unlimited (power) and he had the FBI watching King like a hawk.”

“In America no one is safe, we have guns everywhere,” he said. “Some idiot can come in right now and shoot all of us.”

“If that could happen right now, you know how easy it was to kill Dr. King back then,” he said, calling current gun laws “insane.”

“A lot of people don’t realize that when he died, he was not a hero. King was hated,” he said.

Tim Malone explained the central place in the Black Baptist Church that the minister has. But the other thing, he said, is “we are looked upon to speak up for the people in our community.” He said, “We are to stand up for the oppressed, for the poor. That’s our job.”

“The most serious thing happened when he went out and spoke out against the Vietnam War,” Reverend Malone said. He did so on April 4, 1967, at Riverside Church. “After that Lyndon Baines Johnson did not talk to the man.” Tim Malone said after that numerous other black leaders came out in favor of the war and white liberal support turned against Dr. King.

For many blacks, the war brought jobs and at least the perception of respect. “But King spoke out against the war. He said I cannot preach non-violence here at home and support violence overseas in another country.”

These were tough days for Martin Luther King. Following the death of Malcolm X, the Black radicals called him “an Uncle Tom,” while the black conservatives said he was “too radical.”

“He had to keep his eyes on the prize,” Reverend Malone said. “He had a purpose in life bigger than himself.”

“He did not fight against individuals, Dr. King fought against injustice. He fought against an unjust system that killed innocent people. That held people down,” he said. “And that’s what made him dangerous. Because those that benefit from the system are rich, they’re wealthy, they’re connected, they’re powerful. Don’t rock that boat.”

He noted the billions spent on the military industrial complex – “Can you imagine the millions that we spend on drones for killing, if we spent it on drones for healing?” He asked what if we used the money spent on prisons, and instead spent it in our communities improving our schools.

“We have a lot of work to do, we’re just beginning,” he said. “What you need to know is that Jesus was a radical.” He said, “Jesus was hated, Jesus was a radical, Jesus was a militant.” He told the story of the rich man who came to Jesus and Jesus said if you love God, do one thing, “Give everything to the poor.”

Two months before King died, he preached his last sermon where he foresaw his own death. In that speech King talked about Jesus who said, “The seat on my right and the seat on left are reserved for those that are willing to serve because the greatest of you must be a servant of all.” King said, “That’s the new definition of greatness. Because anybody can be great, because anybody can serve.”

Reverend Malone said that Martin Luther King wanted, when he died, for people to say that “I tried to feed the hungry. I tried to clothe the naked. I visited those that were sick and prison. I tried to love and serve humanity. That’s all I want you to say.”

It’s not about how much money you had or how famous you were, Tim Malone said. “Did you help someone in need? Did you make the world a better place. If you did, this is for you, welcome to my Kingdom.”

“He kept his eyes on the prize,” Reverend Malone said. “King said injustice anywhere is a threat to justice everywhere. What did King want? What was his prize? King wanted justice.”

“Why? Because justice brings us peace. And peace brings us freedom. And freedom allows us to live a great life. And living a great life allows you to love. And the Bible says, God is love,” he said.