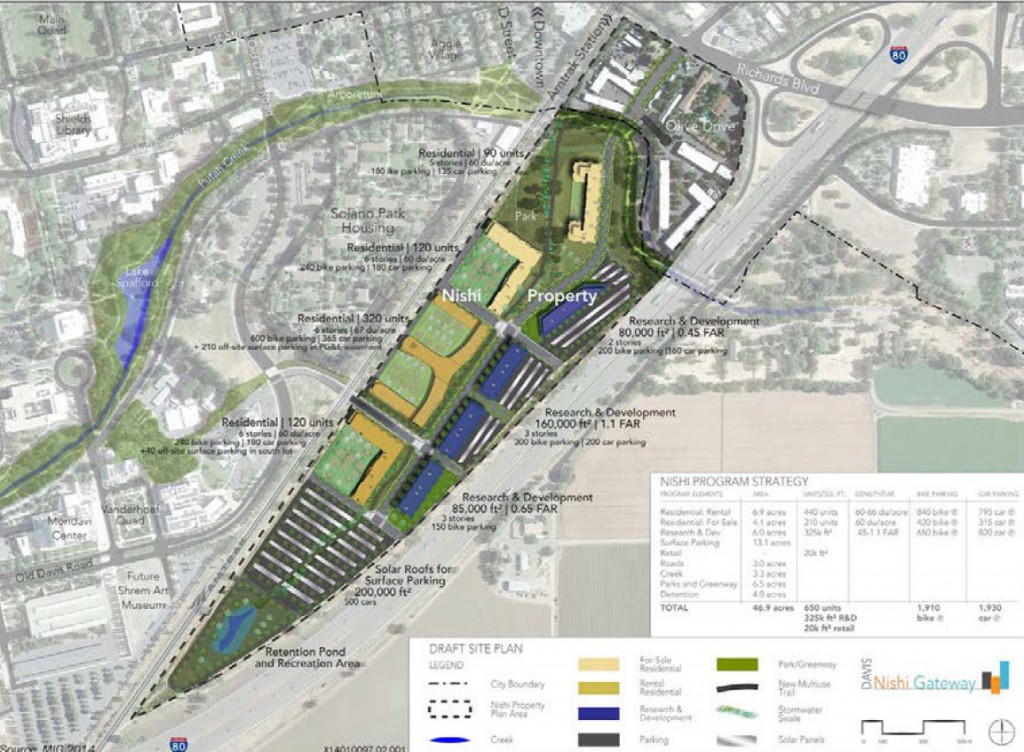 It has been just over two years since the Davis City Council approved a pre-development shared costs agreement with the property owner of Nishi. Last year, the city was awarded a $600,000 grant from the State of California Strategic Growth Council for sustainability and environmental reviews of the proposal.

On the surface, the property, which is conceived of as having both a high density housing component and an innovation center component, might be seen as an easy approval for city voters when it reaches for a Measure R approval. The property is centrally located with easy bike and pedestrian access, both to the UC Davis campus as well as the Davis downtown. It is also secluded enough not to have a huge visual impact on existing residents.

However, concerns exist as to traffic circulation, as there is limited access to the property. Richards Blvd. is already a congested roadway and pushing more traffic through the Richards underpass is seen as problematic. We have yet to see a traffic study or a plan to avoid these problems.

The first part of that will be the required review under the California Environmental Quality Act (CEQA). Currently, staff is proposing two equal-weight alternatives as the primary project to be analyzed in the Environmental Impact Report (EIR): “The preferred project alternative with full ped/bike/vehicle access from both west Olive Drive and the UC Davis campus; and an alternative with access from west Olive Drive only.”

According to staff, “Access to the UC Davis campus would require approval of the UC Regents, anticipated to be within the context of a Long Range Development Plan update. Campus staff report that a LRDP update effort will be launching within 2015 with Regents action anticipated in 2016.”

What they do not appear to be looking at, however, was a plan discussed by the Housing Element Steering committee several years ago: a UC Davis-only access alternative.

The Nishi project is actually only a small portion of a much bigger vision for this portion of town. The city, UC Davis, and Yolo County have been exploring options for creating a Downtown University Gateway District comprised of the Nishi Gateway area, West Olive Drive area and adjacent UC Davis lands.

There is also the proposed Embassy Suites hotel conference facility by a separate applicant that will be analyzed with its own CEQA review, expected to come to council for consideration this spring. Land-use decision affecting the campus properties will be made by the UC Regents and would also require environmental review.

The concepts that were presented to the council in 2014 discussed roughly 500-700 housing units in the form of apartments and condominiums, with another 300-500,000 square feet of non-residential development on the Nishi property, which has been viewed as proposed space for innovation and technology.

Staff notes that there is a discussion of a potential extended stay hotel on the property, “This hotel is not part of the proposed project included within the EIR. However, staff anticipates the possibility of a hotel – and the conditions under which one might be considered – to be part of the Measure J/R Baseline Project Features.”

Staff and the CEQA consultant are proposing the following CEQA alternatives:

The current schedule sees the public review of the scope of the EIR in February 2015. The draft EIR would be issued for public review in July, along with the draft sustainability plans. Staff writes, “This will allow Planning Commission and City Council the capability of holding public hearings and making a decision by the end of the calendar year, thereby allowing the possibility of a Measure R election as soon as March of 2016.”

Part of the next steps will be the sustainability plan – funded through the Strategic Growth Council grant. “The City has contracted with Ascent Environmental to prepare sustainability plans for the Nishi Gateway District. These include water and wastewater, energy, open space, and transportation components. The utility, transportation, and open space plans will also address adjacent UC Davis properties, for consideration during campus efforts of updating its long range development plan.”

According to the staff report, there have been initial thoughts on sustainability by Cool Davis and the Natural Resources Commission. Staff notes, “The Natural Resources Commission will serve as the Council’s advisory body on sustainability efforts for Nishi Gateway. The draft Sustainability Framework, with goals and objectives for the area, recommended actions for further study, and performance metrics is scheduled for NRC consideration later in January. As future studies are completed, they will be presented to the NRC for review and recommendation to City Council.”

Staff adds, “The City and Ascent Environmental are also working with the Sacramento Area Council of Governments to evaluate the Nishi Gateway proposal through the SACOG Urban Footprint model. Urban Footprint is a scenario-based evaluation model which includes the ability to analyze the performance of land use scenarios based on a full range of fiscal, environmental, and public health metrics.”

Not mentioned at this point has been concerns that have been raised about the health impacts of the adjacent highway that runs along the southern boundary of the property.

The other critical issue will be the ability of the development team and the city to manage circulation impacts onto the already congested Richards Blvd. Given that, it is surprising that the equal weight EIR weighs an Olive Dr.-only access point but not the reverse, a UC Davis-only access point – which was discussed by the 2007 Housing Element Steering Committee as a possible alternative.