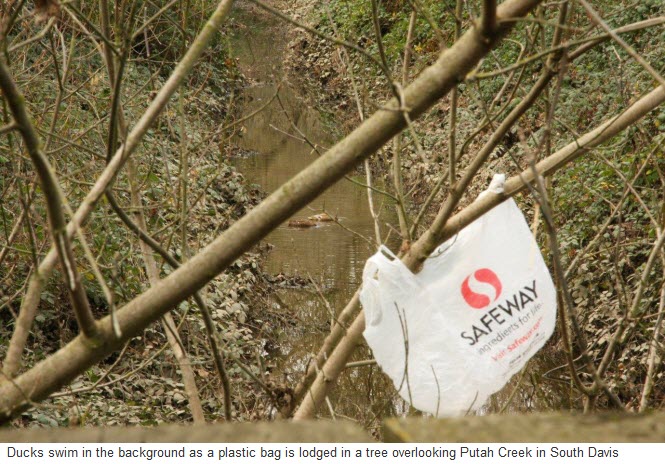 California Secretary of State Alex Padilla announced on Tuesday that his office had certified a referendum to overturn the ban on single-use plastic bags for the November 8, 2016, General Election Ballot.

In order to qualify for the ballot, the ban on single-use plastic bags referendum needed 504,760 valid petition signatures, which is equal to five percent of the total votes cast for governor in the November 2010 gubernatorial election.

The statewide initiative would not affect the laws on the books in dozens of communities like Davis, whose ordinance took effect on July 1, 2014.

The Attorney General’s official title and summary of the referendum is as follows:

REFERENDUM TO OVERTURN BAN ON SINGLE-USE PLASTIC BAGS. If signed by the required number of registered voters and timely filed with the Secretary of State, this petition will place on the statewide ballot a challenge to a state law previously approved by the Legislature and the Governor. The challenged law must then be approved by a majority of voters at the next statewide election to go into effect. The law prohibits grocery and certain other retail stores from providing single-use bags but permits sale of recycled paper bags and reusable bags.

The American Progressive Bag Alliance, which represents bag manufacturers, had about 50,000 more valid signatures than the 505,000 needed to qualify the referendum after a random sample of the signatures was tallied. The group had submitted more than 800,000 signatures at the end of last year.

Governor Jerry Brown signed the bag ban in late September to align state law with ordinances passed by a growing number of local governments in California to reduce plastic waste.

“This bill is a step in the right direction – it reduces the torrent of plastic polluting our beaches, parks and even the vast ocean itself,” said Governor Brown upon signing the legislation. “We’re the first to ban these bags, and we won’t be the last.”

Ironically, that legislation was authored by then-Senator Alex Padilla, the same Alex Padilla whose office has now certified the referendum that could undo his legislation. The law would have prohibited grocery stores and pharmacies from distributing single-use plastic bags after July of 2015 and enacts the same ban for convenience stores and liquor stores the following year. It would also provide up to $2 million in competitive loans – administered by CalRecycle – to businesses transitioning to the manufacture of reusable bags.

“I applaud Governor Brown for signing SB 270 into law. He continues to lead our state forward with a commitment to sustainability,” Senator Padilla said.

“A throw-away society is not sustainable. This new law will greatly reduce the flow of billions of single-use plastic bags that litter our communities and harm our environment each year. Moving from single-use plastic bags to reusable bags is common sense. Governor Brown’s signature reflects our commitment to protect the environment and reduce government costs,” Senator Padilla added.

Opponents argue that the ban will cost manufacturing jobs and boost profits for grocers, who can charge customers a premium for bags now given away for free.

“California voters will now have the chance to vote down a terrible law that, if implemented, would kill 2,000 local manufacturing jobs and funnel obscene profits to big grocers without any money going to a public purpose or environmental initiative,” American Progressive Bag Alliance executive director, Lee Califf, said in a news release.

However, Governor Brown spokesperson Evan Westrup called it “a cynical ploy by out-of-state interests desperate to delay a ban already adopted in more than 100 communities across California,”

Mark Murray, spokesperson for Californians vs. Big Plastic, told the Associated Press that the coalition of environmental, labor and business groups is confident California voters will uphold the ban.

“It’s not surprising that after spending more than $3.2 million, 98 percent of which is from out of state, the plastic bag industry has bought its way onto the California ballot to protect its profits,” Mr. Murray said.

A poll released at the end of October by a bipartisan group of pollsters commissioned by the LA Times, however, shows that the ban has “broad support among voters, presenting a challenge for industry groups that hope to overturn the law.”

Sixty percent of the voters who responded to the survey support the ban. More interesting is that the support is broader than current policies. Fifty-two percent of respondents live in a community that has already banned disposable plastic bags and 60 percent support the ban, with just 35 percent in opposition.

The Times poll found that even 52 percent of the people who do not live under local restrictions support the ban.

However, the industry is fighting back and ready to pour millions into what figures to be one of the more tightly contested issues in November 2016.