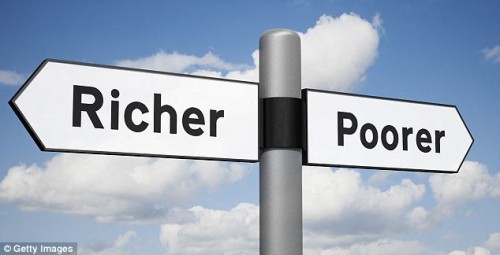 What is rich? What is poor? What is true actionable inequality? What is just a “not keeping up with the Joneses” comparison?   Are those with higher incomes and lower incomes really living inequitable lives, or are we just letting economic class envy and resentment cloud our views?

The popular media and political narrative today is that the US has large and growing income inequality and the “rich” are to blame.

Certainly income inequity is a problem that demands attention. There is copious history of destructive political and social unrest when income inequality become large and unsustainable.

As humans, we all have a natural aversion to the signs of unfairness. In fact, the founding guiding principles of governance for the United States were based on a fair and equitable distribution of opportunity for Americans to live a good life. Yet the founders knew that there would always be rich families and poor families.

During the height of the US industrial upheaval around the turn of the 20th century, monopolies and oligarchs did develop. Those that became super rich would exploit the power of their money to kill off competition and exploit labor.

But the system worked as new anti-trust laws and new labor laws were put on the books and labor unions formed and collectively bargained. We have come a long way since the days of J.P. Morgan and John D. Rockefeller. And the definition of “rich” and “poor” has changed drastically since then.

So, we need to define “rich” in modern terms.

One definition is those families with income in the top 10%. That is a pretty common perspective. Today, the top 10% income families bring home about $150,000 per year.   That is a reasonably good life, but not rich.

So, if the top 10% are not rich, maybe it is the top 5%. The top 5% of families make $190,000 per year. Again, this is a good living, but really not an income level that would qualify as being rich… especially in high cost states like California.

Lastly there is the top 1%. At this level a family would bring home $500,000 or more per year. That certainly sounds like a rich level of income. For a family to take home half a million dollars per year, they should be able to afford big houses, nice cars and fancy vacations. Thinking about this brings up a picture of “fat cats” and stirs up a sense of unfairness in comparison to the lower income earner (say the bottom 10%).

So what do these top “fat cat – one-percenters” do for a living?

A great graphic was published in the New York Times a few years ago during the height of the Occupy Movement protests. http://www.nytimes.com/packages/html/newsgraphics/2012/0115-one-percent-occupations/ 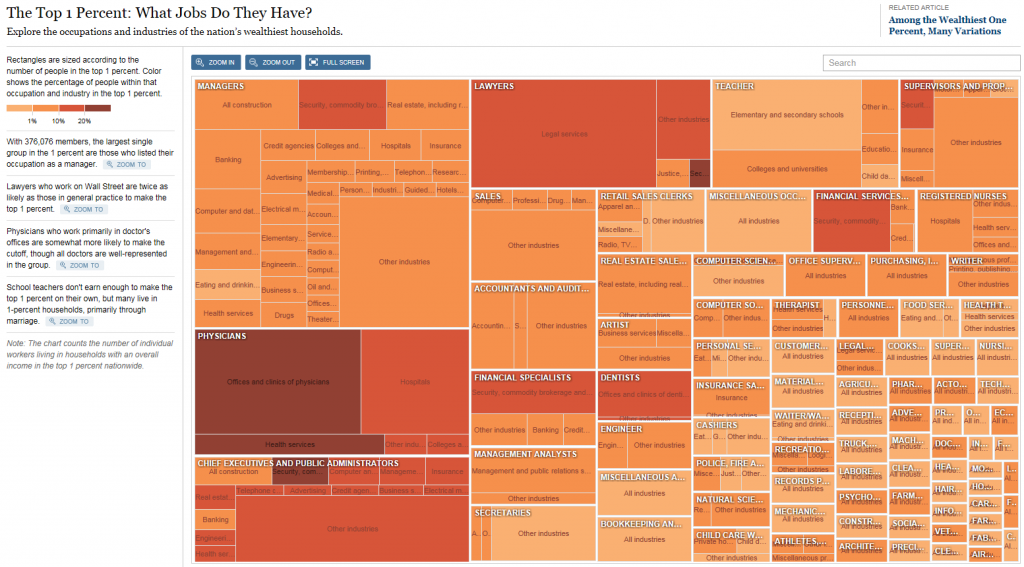 The data and the graphic represent family income within an occupation subgroup.

We can see here that the largest single occupation sub-group in one-percenter families belongs to those who listed their occupation as a manager.

Ironically one occupation that we hear so often is underpaid – elementary and secondary school teachers – is a subgroup with the largest percentage of people in this occupation living in one-percenter families.

In other studies assessing the profile of the top 1% of income earners, it was determined that they tend to work longer hours, being three times more likely than the 99 percent to work more than 50 hours a week, and are more likely to be self-employed.

Managers, teachers and harder-working self-employed people… these certainly do not sound like “fat cats” or oligarchs. In fact, what these occupations have in common is that they comprise people working on just about ALL family income levels.

Even though we can agree that the top 1%, and even the top 10%, are both doing pretty well; what about the bottom 10%… how bad-off are they in this country?

How should we define “poor” in modern times?

One perspective answering this question comes from Economist.com which reports from the data of the Organisation for Economic Co-operation and Development’s “Better Life Index”. This index tracks 24 quantitative and qualitative criteria/indicators.   The graph below from the Economist uses 10 of them deemed to be representative more of the picture of economic life.

The graph demonstrates that the US, when compared to the other countries on the list, does have a slightly greater income gap between families at the top and bottom 10% of income. The graph also proves, again, that the top 10% income earners in the US are at the top in economic quality of life. 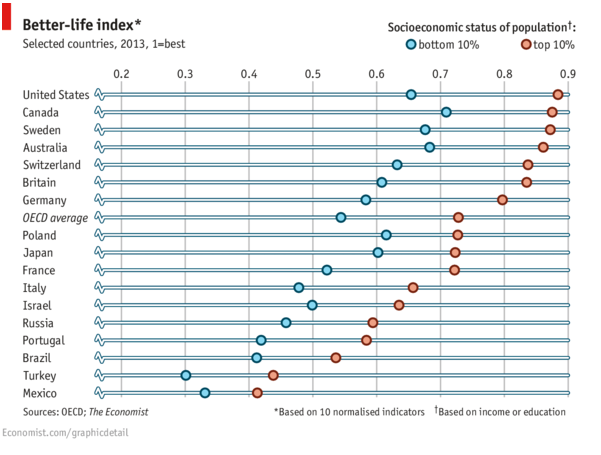 But the graph displays something we don’t readily read or hear in the media or from politicians… that the bottom 10% of income earners in the US have a better economic life than all but three other countries (Canada, Sweden and Australia); and these three only have a slight advantage. Also, we don’t read or hear that these other three countries sport similar economic quality of life gaps between the top and bottom 10%.   Lastly, we don’t read or hear that the bottom 10% of US incomes are very near the OECD average of the top 10%, and greater than the top 10% compared to Italy, Israel, Russia, Portugal, Brazil, Turkey and Mexico! That’s right, the so called “poor” in the US are living a similar life of the “rich” in these other countries.

Germany is cited as a model country for the US to follow. Yet Germany ‘s economic quality of life gap between the top 10% and bottom 10% is even greater than the US. Germany’s poor are less well off than are their US counterparts… but by this data the top 10% of Germans own a lower economic quality of life than do their US counterparts. Don’t tell this to the people that want the US to model Germany as a better country!

One more point that the Economist makes… that the Better-Life Index does not look too different from classic GDP rankings. In other words, income distribution is just a product of the country’s strength or weakness at overall economic output.

Maybe it is the “economy stupid” that is both the root cause and the root opportunity for a greater economic quality of life. 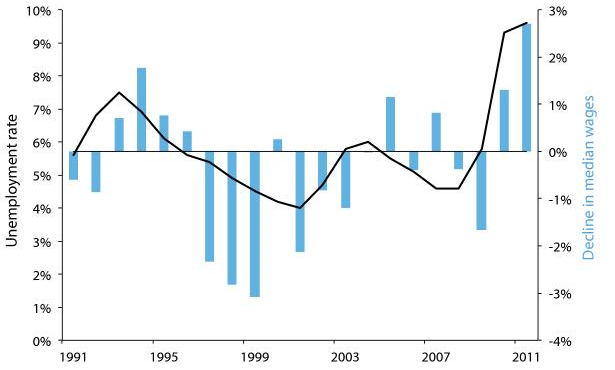 This graph comes from the most recent Economic Policy Institute’s “State of Working America” study. It demonstrates that wages are generally pro-cyclical, going up in a boom when unemployment falls, and down in a recession.

The point here is that a growing economy increases wages and should have the net effect of increasing overall wages and helping many people have a better economic life.

For example, just recently Walmart said it would boost wages for its U.S. employees to at least $9 an hour this year, and to $10 an hour by Feb. 1, 2016. The reason?… growing competition for a tighter supply of available employees as the economy has heated up.

The obvious question being raised is does the US income gap really matter in modern time if the people of the US have a good economic life… especially in comparison to the rest of the world?

When the “rich” are primarily just other workers and not oligarchs, does it make sense to keep directing class anger at the rich because they make more money?… especially considering that the gaps are not significantly greater than other industrialized countries we tend to laud.

Certainly there are poor people in the US, and income inequality is something we should focus on. Most people agree with this.

In a 2012 article in the New York Times, “Among the Wealthiest 1 Percent, Many Variations”, almost all of the people interviewed in the article, whether conservatives or liberal or in between, agreed that the wealthy could and should shoulder more of the country’s financial burden, and almost all said they viewed the current system as unfair. Where these people differed is how to define the problem and how to solve the problem.

Politics is a blood sport, and class warfare is an age-old strategy that has proven to pay dividends to those exploiting it for power.   But if both rich and poor alike agree that income inequity is a problem that we should solve, how is simply complaining about the “rich” helpful?

Should taxes be raised? Should we move to a flat tax? Will raising the minimum wage help or hurt? Should we invest more into schools and economic development? Should we reduce the size and spending of government on non-essential activities so we have more resources to help lift up the poor to a better economic life? Should we focus on economic policy to grow the economy? Should we cut some social services to encourage more people to want to work?

These are just some of a myriad of questions we should be discussing to try and reach agreement for a plan to help everyone in this country achieve a good economic life. The media-standard rich-versus-poor narrative is not helpful in the least unless your only goal is to exploit class warfare for political power. But that comes at a great cost to everyone; both rich and poor.

36 thoughts on “Class Warfare and Economic Quality of Life”