In the last few years there has been a strong pushback over what has become known as mass incarceration – where the U.S. has the highest incarceration rates in the world, and prison populations have risen even as crime rates have reached 40-year lows.

There is one school of thought that argues that mass incarceration is behind the drop in crime. However, that view has been increasingly challenged by those who argue that current policies are ineffective. The increase of prison population has been driven, not by an increase in dangerous criminals incarcerated, but by the failed war on drugs. Lengthy prison sentences put people away for a long time, but with many of them at an age where they are more likely to stop committing crimes.

Adding to a growing body of evidence is the research by the Brennan Center for Justice at NYU, which argues that long-standing policies that have led to the U.S. having the highest incarceration rate in the world, with some 2.3 million people behind bars, is not necessarily translated into less crime.

“If this is not bringing down crime, why are we incarcerating so many people? We’ve been able to identify more effective and less intrusive forms of policing that can also bring down crime,” Inimai Chettiar, director of the justice program at the Brennan Center, said in a telephonic news conference Thursday.

The study, “What Caused the Crime Decline?“, “examines one of the nation’s least understood recent phenomena – the dramatic decline in crime nationwide over the past two decades – and analyzes various theories for why it occurred, by reviewing more than 40 years of data from all 50 states and the 50 largest cities.”

It concludes that “over-harsh criminal justice policies, particularly increased incarceration, which rose even more dramatically over the same period, were not the main drivers of the crime decline.”

“We find that incarceration had a much more limited effect on the drop in crime than previously thought,” Mr. Chettiar said. “Incarceration accounted for about 5 percent of the crime decline in the 1990s, and in the 2000s that drops to almost zero.”

On the contrary, the report finds “that increased incarceration has been declining in its effectiveness as a crime control tactic for more than 30 years. Its effect on crime rates since 1990 has been limited, and has been non-existent since 2000.”

More important were various social, economic, and environmental factors, such as growth in income and an aging population. One interesting finding was that “the introduction of CompStat, a data-driven policing technique, also played a significant role in reducing crime in cities that introduced it.”

The report concludes, “Considering the immense social, fiscal, and economic costs of mass incarceration, programs that improve economic opportunities, modernize policing practices, and expand treatment and rehabilitation programs, all could be a better public safety investment.” 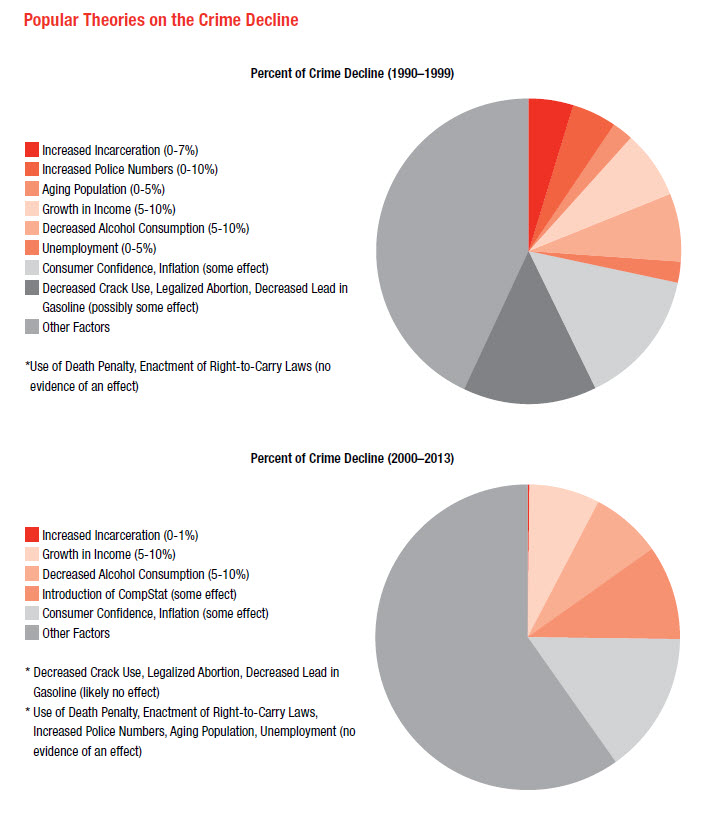 The key finding here dovetails on the 2014 report from the Brooking’s Institution’s Hamilton Project, which found that incarceration has “diminishing marginal returns.” In other words, “incarceration becomes less effective the more it is used.”

They are careful to note that “this report does not find that incarceration never affects crime. Incarceration can control crime in many circumstances. But the current exorbitant level of incarceration has reached a point where diminishing returns have rendered the crime reduction effect of incarceration so small, it has become nil.”

“We found at its current astronomical levels, increased incarceration lost its bite as a crime reducer,” said one of the study’s authors, Oliver Roeder.

Instead of one factor, the regression analysis model that the researchers run finds a combination of factors: increases in police officers, an aging population, a decrease in alcohol consumption, growth in income and decreased unemployment.

That dovetails with other research that suggests that demographic shifts rather than incarceration rates are driving much of the change in the crime population. That also suggests why additional incarceration would have marginal returns.

If you merely end up locking away people, are they less likely to commit crimes? You may catch a few that will be lifelong criminals, but you end up catching a lot of people in the net that would not have committed another crime. So, from a resource management perspective, you are spending scarce money, resources and prison beds on people who, statistically speaking, are unlikely to commit additional crimes.

Another interesting sub-finding was the effectiveness of crime analytics. CompStat is a comparative statistics policing method that was introduced in the 1990s by the NYPD and its been widely adopted nationwide.

The summary notes, “Through the authors’ research, CompStat emerged as one of the most consistent, easily identifiable, and widespread policing techniques employed during the time period under examination. CompStat is a police management technique — a way to run police departments — that was widely deployed in the nation’s cities in the 1990s and 2000s, starting in 1994 under New York City Police Department Commissioner Bill Bratton. Although departments use it differently, the general objective is the same: to implement strong management and accountability within police departments to execute strategies based on robust data collection to reduce and prevent crime. Departments and units deploy different specific tactics, including the ones listed above, to manage crime in neighborhoods. Notably, CompStat should not be conflated with these tactics. CompStat is not equivalent to broken windows, hot spots, or stop-and-frisk.”

The researchers found that CompStat policing contributed to about 10 percent of the nation’s crime decline.

That is not a stunning finding. After all, the use analytics has been used for anything from voter data to sports.

The research here is suggestive that the best approach to the reduction of crime is not to pump more money into incarceration, but rather a broad-based approach that gives police tools to fight crime more effectively, along with substance abuse programs, education and job training, among other factors.

29 thoughts on “Eye on the Courts: Study Finds Mass Incarceration Not Behind Crime Drop”