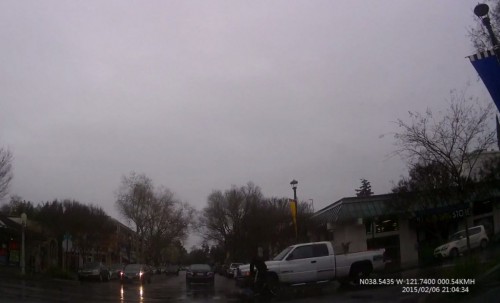 In Saturday’s article “When Bike Meets Car,” I describe and opine on an accident that occurred around the corner from my office, at F and 2nd Street in Davis. While my main concern was my observations over the years about the hazards of downtown driving and the safety of the multi-modal encounters at four-way stops, the main conversation evolved into one over who was at fault.

However, after consulting Chief Landy Black, my analysis was wrong. He cited California Vehicle Code section 21800(a) “The driver of a vehicle approaching an intersection shall yield the right-of-way to any vehicle which has entered the intersection from a different highway.”

And 21800(c): “When two vehicles enter an intersection from different highways at the same time and the intersection is controlled from all directions by stop signs, the driver of the vehicle on the left shall yield the right-of-way to the vehicle on his or her immediate right.”

He did note, however, that from the liability perspective, comparative fault would be at play, and the pickup driver might be found to share some of the liability.

The chief also noted that the two vehicles that crossed in front of the pickup driver, causing him to stop before completing his passage through the intersection, were also violators.

Chief Black’s legal clarification is noted and helpful. From the perspective of Saturday’s article, it weighs into the chaotic situation at an all-way stop in the downtown with multiple modes of transportation.

My suggestion for studying the issue of downtown streets and safety was duly criticized as well. Several readers quickly noted that, while the city commissioned a Downtown Parking Task Force, the task force dutifully met for a long period of time but the findings were undermined due to a number of factors that arose and therefore they did not see a similar study as yielding fruitful results that would be acted upon.

All, in fact, noted, however, the simple suggestion that we have a problem with the structure of downtown traffic that has created safety issues and that we are quite fortunate we have not seen worse problems arising from that situation.

As Steve Tracy noted on Saturday, the collision data he received from Davis Police and Public Works “shows 3,615 incidents on Davis streets for the ten year period from January 2004 through December 2013. In the downtown area between A and the tracks, 1st and 5th, there were a total of 412 collisions in this time period, 12% of the citywide total.”

He added, “Ninety-two of those downtown incidents involved people on bicycles, and twenty-five involved pedestrians. This is a total of 127 people on foot or on bikes hit in a ten year period in our central district. Virtually every one of those people were injured, but injury rates for occupants of the vehicles involved in those collisions are nil.”

These are just reported incidents as it was pointed out that the accident I witnessed and caught on video would not have been counted in that total, as it was not officially reported. That’s one accident every ten days on average over a ten-year period. 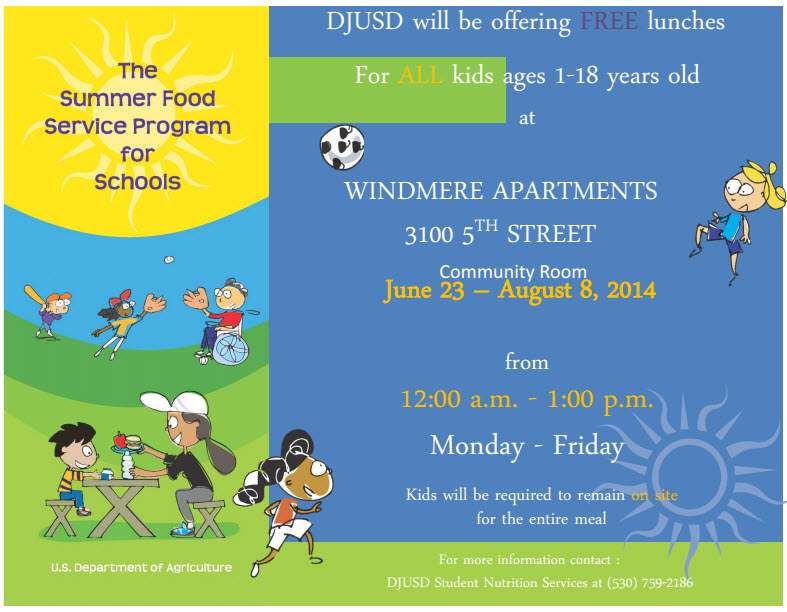 It’s a follow up on a list of suggestions for promoting afterschool and summer meal programs, “Davis Offers Students a Summer Meal Program.”

Danielle Foster, the city’s Housing and Human Services Superintendent, told the Vanguard that the city has been working with the school district the past two years to try to get a Summer Meal Program going. Last summer they succeeded in having a local program in Davis.

She told the Vanguard, “In partnership with Dominic Machi, in student nutrition for DJUSD, city staff was able to assist in promoting and coordinating a local program in 3 locations last summer. The program started with meals at Holmes Junior High and Montgomery Elementary (flyer attached) and then expanded to Windmere Apartments, an affordable housing complex on Fifth street.”

Meals were prepared by school district staff and served at the three sites.

All lunches came with a Vegetable, Fresh Fruit, and Milk.