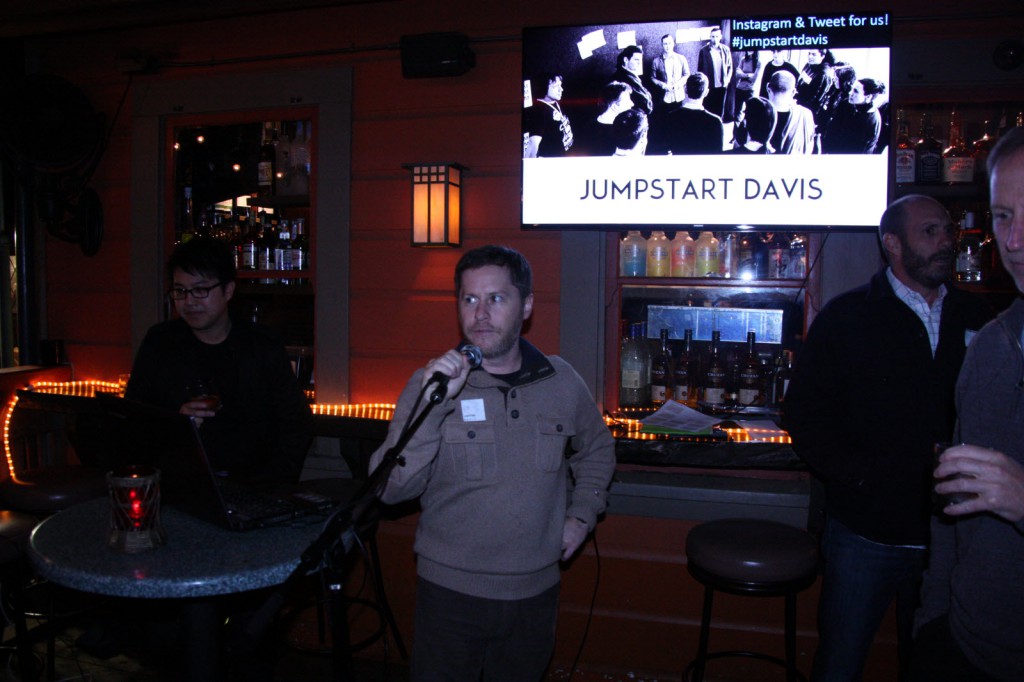 Tonight will be the fourth monthly Jumpstart Davis meeting. Tonight at 6:30 pm at Sophia’s Thai Kitchen in Davis, Jumpstart Davis will highlighting three local companies that work in Biotech or Medtech. Speakers include Sudhee Lakshmana, co-founder of SonanuTech, Paul Henderson from Accelerated Medical Diagnostics, and Charles Lee, who is the founder of Molecular Matrix.

Paul Henderson of Accelerated Medical Diagnostics told the Vanguard that the goal of their project is to match chemotherapy patients with the right drugs “so they have the highest chance of responding.”

“This is a real problem because, depending on the cancer, the response rates to the most commonly used chemotherapy are often less than 50 percent,” he said. “For example, lung cancer chemotherapy is about 30 percent. So the patients suffer the side effects and the health system suffers the costs for that treatment needlessly.”

“What we do is we give the patient a microdose which is about one percent of the normal therapeutic dose of the drug. Then we take a blood and a tumor sample and we analyze it for how much of the drug has absorbed into those cells and interacted with the drug target,” he said. “What we find is above a certain threshold the patient will respond to the full dose of chemotherapy.”

This creates a biomarker by exposing the patient to the drugs and that biomarker level gives some idea to whether the patient will respond to the therapy.

Sudhee Lakshmana, co-founder of SonanuTech, started off a with Superfund research at UC Davis. It’s a program that deals with toxic and hazardous chemicals dumped on sites. They needed a rapid test to identify and analyze those chemicals. They quickly realized that they were great at analyzing anything.

“So once we realized that potential, we started looking at a niche market where we could really make an impact,” Mr. Lakshmana said. He said they went into food space initially “because there’s less barrier for entry.”

Eventually, they look at the dairy industry and specifically cheese manufacturing. “They have a unique problem,” he said. “The US produces 20 billion pounds of cheese. Such a large scale production has large scale problems with production, something known as the bacterial phages – they are viruses that basically eat the bacteria responsible for making cheese and stop cheese production.”

“We figured out how to identify those viruses very quickly so that we can change the cheese process well ahead of time,” he said. This is a huge problem for the big companies that are producing a 1 million pounds of cheese a day. “The magnitude of the problem is so large they need to identify this problem ahead of time.”

SonanuTech received $150,000 of funding from NSF for their Small Business Innovative Research Programs.

Charles Lee of Molecular Matrix is the inventor of a core technology that has been developed at UC Davis. They are focused on providing advance research tools for cultivating and studying stem cells.

Mr. Lee told the Vanguard that they develop and commercialize “a novel 3D scaffold technology for generating various organoids for clinical and research applications. The current focus is to obtain an approval from the FDA for commercialization of our cutting edge bone and skin regeneration products.”

Mr. Lee, who received both his bachelor’s and PhD from UC Davis, and did his post-doc training here as well, formed the company in August 2011 and obtained an exclusive license from the university for the commercialization of the technology.

It may “also be used to investigate interaction between multiple cell types in static or dynamic culture systems.”

Paul Henderson work on introducing small doses of chemicals to cells and watching responses to that exposure at the Lawrence-Livermore laboratory led him to a collaboration with UC Davis. “That has been a very fruitful collaboration for about ten years now,” he said.

He moved to UC Davis as a professor and started the company “once we realized how much it was going to cost to try to commercialize some of this work.” For the last six years, he splits his time between Accelerated Medical Diagnostics as their CEO and UC Davis as a scientist.

Sudhee Lakshmana started as a PhD in chemistry and physics in India. He came to the US looking to do something very different from physics.  He wanted to bring biology to his research and when he came to Davis, as he had the opportunity to work with biology, chemistry and physics. “It was pretty unique and very exciting,” he said.

He started working at UC Davis as a post doc.

“When we started looking at commercial solutions, there was nothing out there like we had,” Mr. Lakshmana said. “So then we said, this is so unique, this needs to go out of the university setting.”

They had a number of options, but finally narrowed it down to the food sector.

For Charles Lee, he had been the inventor of the core technology that was developed at UC Davis. Lee was a stem cell biologist who was a director at research centers at UC Davis.

In 2011, it was UC Davis that helped aid Mr. Lee in his efforts to commercialize his product that could eventually replace animal testing in research.

Charles Lee told the Vanguard, offering this advice to others trying to do startups in this field, “A technology that the world needs in the hands of right people with passion makes the startup journey so much more fun and exciting. Startup founders must be able to captivate, motivate and empower people around with a clear vision and objective that can change and improve the way to do things in our society.”

Paul Henderson stated, “Put a lot of time up front to talking to the major shareholders – other physicians, potential customers, talk to investors, and do your best to find out if it’s really a commercially viable potential produce prior to development because you can spend a lot of time developing something and if there’s no market for it or there’s no investors, you will just put a lot of effort into essentially nothing.”

Sudhee Lakshmana advised that potential entrepreneurs be persistent. “It’s a given,” he said. “If you want to get started you cannot give up so easily – if you believe in it.” He said they have been very persistent, while they don’t have a product ready to launch yet, they see that there is a need.

Learn more about all three companies and their founders – Sudhee Lakshmana, co-founder of SonanuTech, Paul Henderson from Accelerated Medical Diagnostics, and Charles Lee from Molecular Matrix – tonight at 6:30 at Sophia’s Thai Kitchen in Davis.

Also a non-profit community coworking space, POLLINATE Davis, is opening its doors this month to local startups. POLLINATE is located in the heart of Downtown Davis, at Regency Square, 508 Second Street, Suite 208. POLLINATE Davis has four private offices as well as a conference room and desks, which can be rented by individuals. They will be hosting classes on marketing, business, and programming for both their tenants as well as members of the public.