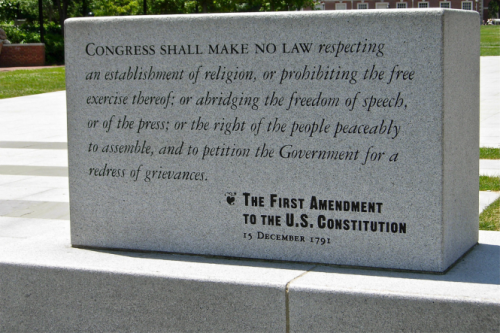 A few weeks ago I published an open letter from the Sacramento Regional Coalition for Palestinian Rights sent to UC Davis Chancellor Linda Katehi. It was not that I agreed with the content of the letter or the views expressed, but I like to air positions contrary to my own on this site.

Just as the Vanguard has in the last two weeks published several commentaries by Jeff Boone, we allow fairly free rein to various viewpoints in our community and nationally.

Anyway, every article on the Vanguard gets posted on Facebook and tweeted out on Twitter. Not long after I published the article, an old friend of my family, I’ll call him “Ben,” posts, “Did you write this, David? If so, I guess you finally did turn against Israel, eh?”

Sometimes people look at the title on Facebook and don’t hit the link, but the title was ambiguous enough I knew he had to have read the article and would have noted the first line in bold that indicated I had not written that. At the bottom of all guest articles is a disclaimer: “Disclaimer: the views expressed by guest writers are strictly those of the author and may not reflect the views of the Vanguard, its editor, or its editorial board.”

The poster continued, “I did read the article, David. I read how they say they applaud the divestment from Israel, and their concern for the swastikas is that it will make Palestinian activists look bad.”

I made the point in response that I didn’t write that and I often publish articles I don’t agree with and sometimes that are critical of me. Then I wrote, “Why? Because I not only believe in free speech, I practice it.”

After showing him that I had stuck a disclaimer into the article he wrote, “Yet you gave them the forum anyway… for free speech? There are no shortage of forums for those who want to spread their anti-Israel venom.”

That is not the point. This was an issue that happened in the Davis community. While it bleeds into national issues, from my perspective this was primarily a local issue and I tried to cover it as such and present all viewpoints.

But the bigger point which I found interesting on this issue is that it reverses a trend. In the case of Israel, it is the right who seem to want to shut down speech on campus, whereas for years, it was the left who often turned against free speech on campus – which is a position I agree with the right on, the lack of tolerance on the left for divergent viewpoints.

When I was a political science major in the early 1990s at Cal Poly, one of my professors assigned us the book, Free Speech for Me – But Not for Thee by Nat Hentoff. Those were the days before Mr. Hentoff became persona non grata in the liberal community, but his message was the same.

This was a man who believed in free speech and, in his younger days, testified on behalf of Lenny Bruce during his obscenity trial, but he was equally critical of anti-porn feminists, blacks who attempt to ban Huckleberry Finn from schools, and political correctness on campus. He is a supporter of flag-burners’ First Amendment rights but opposes anti-bigotry speech codes on campuses, maintaining that “politically correct” students and professors have stifled debate.

The question, I think, we as a society need to ask is what is free speech?

In the same article reference above, the letter states, “We have heard from numerous such targeted students at UCD, as well as some faculty, that they are afraid to speak out and become active in causes dear to them out of fear for their academic standing or future employment possibilities.”

The reader went on to say, “It is just dawning on the ASUCD students who voted for the divestiture resolution that there are consequences to taking controversial stands that make people “mad.”  This is going to become a defining moment for them, or not!”

Another reader challenged this view: “Just last week you were lamenting that college campuses were not bastions of free speech.  now you seem alright with that fact when it’s an issue that bumps in your direction.”

The first reader responded, “Two separate issues.  If these students want to be stupid and say and do what they did, I would lay down my life for their right to do so.  That is completely different from the issue of being wise about what you say and do.”

Again, what is free speech? The reader here seems to define it as a negative view of free speech – as long as there are no legal restrictions against free speech, then we have satisfied our free speech requirement. However, I believe in a more positive view of free speech. Freedom of speech is not simply the absence of legal constraints, but rather the ability to actually be able to carry out free discourse without fear of retribution.

A situation where an individual cannot speak out due to fear of social, economic, or other ostracism could be considered just as repressive as the situation in which an individual faces imprisonment or death for speaking out. Any time there are consequences for speech, our freedom is constrained and the free exchange of ideas is thwarted.

As I stated yesterday, rather than shut down debate when we disagree, we should have open dialogue and discussion. Hatred should not be silenced, but confronted with love, compassion and truth.

The most powerful part of the civil rights movement was that hatred was not responded to with force or violence, but rather a conception of love where the enemy is loved and embraced rather than scorned.

We live in a society where, increasingly, we have free speech in name only.

This is a point that Glenn Greenwald made with respect to surveillance. In his TED talk from last fall, “Why Privacy Matters,” Mr. Greenwald (no relation) argues in effect that “when we’re in a state where we can be monitored, where we can be watched, our behavior changes dramatically. The range of behavioral options that we consider when we think we’re being watched severely reduces. This is just a fact of human nature that has been recognized in social science and in literature and in religion and in virtually every field of discipline.”

In a social situation, when you know you are being watched, most people become conscious of their every action and movement. As Mr. Greenwald puts it, they “make decisions not that are the byproduct of their own agency but that are about the expectations that others have of them or the mandates of societal orthodoxy.”

Extending this to free speech – any time we know that our speech can be turned against us, we alter it, we conform, we keep quiet.

This has profound consequences for our society. The political arena has become bloodsport where it is not necessarily the marketplace of ideas that wins out at the end of the day, but rather who makes a mistake, who says something that can be manipulated or twisted.

There are profound consequences for public policy, because people are afraid in the political arena to speak out against a policy that is problematic if they believe that they will be politically damaged.

We have the extreme example of the of the McCarthy era where there were virtual witch hunts for people who might be associated with Communists or left-thinking.

More recently, we saw in the days post-911 the willingness for many to support draconian curtailments of liberty such as the Patriot Act, the insidiousness of the act to create a national security state, and the unwillingness of either political party to undo it.

The result was that, in 1992, Democrats ran toward the death penalty to the point where Bill Clinton actually rushed back to Arkansas to oversee the execution of one individual. Problems with the death penalty would be ignored for a long time, and only in the last five to ten years have criticisms about fairness, effectiveness, and, of course, the problem of wrongful convictions crept back into political discourse.

Yes. we have the real world lessons of free speech turning against the speaker, but that is far from a good state of affairs.

We need a society where we can have free and open dialogue, and any time fear is introduced, we lose out and there are profound policy implications to that loss as people are not willing to speak against popular policies or speak for unpopular ones.

The debate over anonymity has long existed on these spaces. But one reason the Vanguard has always allowed anonymous posters has been to allow for speech without fear of retribution.

It was an interesting exchange the other week.

Another responded, “Ironically stated by an anonymous poster.”

The point is a powerful one – the need to be able to speak one’s mind without fear of retribution. Staying out of the kitchen means not engaging in the public debate, and that cannot be a good thing for a free and open society.

The Vanguard, of course, seeks to carve out public space for these dialogues, but free speech must go further. We should not fear people who have a divergent opinion, rather we should embrace that opinion as a chance to learn something new about the world and a chance to correct others if they are mistaken.

To me, that is the hallmark of free speech.

35 thoughts on “Sunday Commentary: Freedom of Speech, Just Watch What You Say”