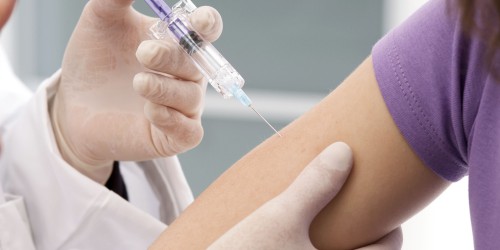 In the modern era, some of the greatest threats to humanity in the form of disease had been either eradicated or were on the verge of eradication by virtue of vaccination – polio, smallpox, measles, once a grave fear or a deadly epidemic, were non-existent. But in recent years we have seen, first, a recurrence of whooping cough back in 2011 in California, which was the worst outbreak since 1947. Now it is measles.

The culprit is multifold, but there is an alarming resurgence of parents refusing to vaccinate their kids. It has been called the “anti-vaxxer movment.” It has been fueled by misinformation in the press, the internet and now even from some enterprising politicians.

Republican Speaker John Boehner was forced to emphatically call on all children to be vaccinated against diseases and for the parents to declare that they are not part of the “anti-vaxxers,” after two high-profile Republicans who may run for president – Kentucky Senator Rand Paul and New Jersey Governor Chris Christie — opined that parents should have the choice as to the decision of vaccinating their children.

But one Republican Congressman, John Fleming of Louisiana, countered, “If it’s a personal choice, that would mean you could also dump your sewage and trash in the middle of the street. Of course, you’re not allowed to do that, are you? It’s against the law. Why? Because of public health.”

I very strongly oppose the government’s intrusion into the private lives of citizens. However, the government has the duty to protect public health and people failing to vaccinate their children represent a clear danger to public health.

There is a threshold of vaccinations below which the public is at risk of severe outbreaks. If it were only a matter of the people who willfully made these choices suffering the consequences, then perhaps I would be more sympathetic.

The problem is that the people hurt are largely innocent children – first, the children of parents withholding the vaccination, and, second and perhaps most significantly, infants who are too young to receive the MMR vaccine (measles, mumps, rubella).

What fuels this? A patent misunderstanding of science by parents who are educating themselves based on flawed articles on the internet and word of mouth. Some have been critical of the health care system which has not effectively communicated strong counterarguments.

One study of 1500 parents back in 2011 showed that one quarter of them held the belief that vaccines can cause autism in healthy children.

We have in the past noted the sad state of science education in schools which aids and abets the fundamental misunderstanding of science in critical public issues – from climate change to evolution to mandatory vaccination against childhood diseases.

There is a huge and growing gap between the US scientists and the American public as embodied by a Pew Research Center. In recent years, some have suggested a liberal-conservative split on science, but the Pew Research Center did not denote such a split.

The gap on vaccination is not quite as large. Eighty-six percent of scientists favor mandatory childhood shots while 68 percent of the public do.

But that 68 percent is sufficiently low to cause real health issues.

A 2011 article in Scientific American focused on three recurring themes for those not wanting to vaccinate their children. One group believes that their children are not at risk for certain diseases. Others believe that  some diseases like chicken pox and measles are not serious enough to require vaccinations. And then there are those who worry about the safety of vaccines.

Furthermore, “These results also show the flaws in the ‘free rider’ argument, which erroneously suggests that an unvaccinated child can avoid any real or perceived risks of inoculation because enough other children will have been vaccinated to protect the untreated child.”

In 1998 in the Lancet, one of the most prestigious medical journals in the world, Andrew J. Wakefield and 12 colleagues proposed that the measles vaccine could cause autism in susceptible children. However, after publication other researchers were unable to reproduce his findings or confirm his hypothesis.

As the Scientific American article notes, since then, dozens of studies have shown that vaccination does not cause autism. They note, “It is rare in science that published scientific findings have been so thoroughly, and publicly, disproved.”

More interesting, the Lancet would retract the article in 2010. The co-authors “no longer vouch for the study findings.” And “Wakefield himself was accused of falsifying the data and lost his medical license.”

This was a real scandal, as it turns out (you can read a synopsis in Wikipedia), but sadly the damage was done.

“Despite the complete dismantling of Wakefield’s vaccines-cause-autism hypothesis, public skepticism about vaccination has only increased as new speculative theories have been put forward,” Scientific American continues.

They argue “That this cycle—debunked links followed by ever grander speculation—keeps repeating itself is a clear indication that the scientific community is more reactive than proactive when engaging the public about vaccine safety. Investigating narrow, specific theories about vaccines does not seem to provide adequate reassurance to parents with broad and vague worries about vaccines.”

Senator Richard Pan, just elected to represent West Sacramento and parts of Sacramento in the State Senate and also himself a pediatric doctor, has authored two bills that at least will help.

First, in 2012 he authored a bill that was passed into law in 2013 and took effect in 2014 that requires parents to talk to a licensed health care practitioner before they can exempt a child from school vaccinations. His office believes that has reduced the use of personal belief exemption by 20 percent in short order.

“The high number of unvaccinated students is jeopardizing public health not only in schools but in the broader community.  We need to take steps to keep our schools safe and our students healthy,” said Senator Ben Allen.

I completely agree with the senator. This is a public health issue and those withholding vaccinations from their kids are putting many more people at risk.

69 thoughts on “Sunday Commentary II: The Line Between Freedom and Public Safety When It Comes to Vaccination”