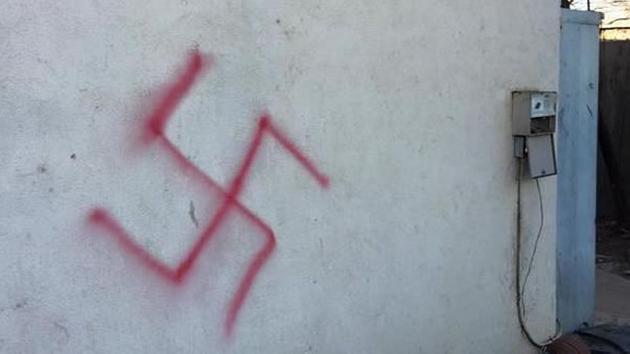 At 10:18 am on Saturday morning, Davis Police were called to the Alpha Epsilon Pi Fraternity in regard to a vandalism report. The AEPi is a off-campus Jewish fraternity affiliated with UC Davis.

The fraternity had found two swastikas painted near the back door and side door to the fraternity house. The swastikas were 1″x1″ and 3’x3′ respectively, and were placed on the building using red paint.

Police said the residents believe that the crime had occurred between 2 am and shortly before its discovery.

Police indicated that this would be classified as a hate crime. The fraternity house reportedly does not have a video surveillance system, forcing the police to rely on tips as they investigate the matter.

Students for Justice in Palestine, among other student groups, released a statement condemning the vandalism: “Just as we condemned the hanging of a noose, the defamation of the Palestinian dove, or calling students ‘terrorists’ based on their physical appearance or beliefs, we equally condemn the display of the swastika.”

They added, “We reject any attempts to blame this on any single student community, including the UC Davis divestment movement. We hope that the university investigates and exercises due diligence in holding those responsible for this hate crime to the fullest extent of the law.”

On Thursday, ASUCD had passed a resolution by an 8-2-2 vote calling for the UC Board of Regents to divest from “corporations that aid in the Israeli occupation of Palestine and illegal settlements in Palestinian territories, violating both international humanitarian law and international human rights.”

“This morning students at a UC Davis Jewish fraternity discovered despicable and hateful graffiti on their walls, including a large red swastika that appeared to be spray-painted on the exterior of the house,” the joint statement read. “This kind of behavior is not only repugnant and a gross violation of the values our university holds dear, it is unacceptable and must not be tolerated on our campus or anywhere else.

“No matter what religious, political or personal beliefs we hold, as members of a university community we have an obligation to treat each other with respect and dignity, even when we disagree,” they continued. “Nothing rivals a swastika as a more potent or offensive symbol of hatred and violence toward our Jewish community members, but this odious symbol is an affront to us all. As campus leaders, we are saddened and outraged that this occurred in our community.

“As our Principles of Community demonstrate, UC Davis is built on a foundation of tolerance and inclusion, and when those principles are violated in such a reprehensible manner, we have all been violated,” they said.

“We have requested that the police investigate this act of vandalism as a hate crime. We appeal to every member of our UC Davis community to denounce any and all such acts of bigotry and intimidation,” the chancellor concluded. “We must instead demonstrate to the world that no matter what issue or debate we engage in, we are a community committed to mutual respect and tolerance. No single act such as this will ever define us, but we must define ourselves as a university community that has no tolerance for prejudice or such an abhorrent symbol and the history of hatred it evokes and extends.”

The police are seeking help. Anyone with information regarding this crime is encouraged to call Davis Police Department, (530) 747-5400.

Share:
Tags:Chancellor Linda KatehiCity of DavisDavis Policehate crimeJewish FraternityLaw EnforcementSwastikaUC Davis
Previous : How Do We Move Beyond Our Country’s Persistent Racial Tensions?
Next : Sunday Commentary: Developers Should Take the Deal on the Table on Paso Fino

59 thoughts on “Swastika Found at Jewish Fraternity; Investigated as a Hate Crime”