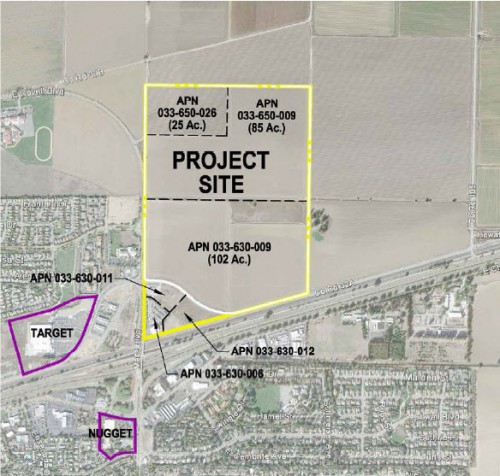 The Davis City Council, while reaffirming their commitment to creating one or more community farms, left open the question of where that farm would be located. Council unanimously passed a motion deeming that the 25-acre Mace parcel was suitable for the development of a community farm. However that left open a lot of questions about where this process would go.

Councilmember Brett Lee wanted to take the 25-acre Mace property owned by the city out of the innovation park proposal. He said “Item three is a little bit of a dodge.” He made a motion that the parcel not be included in the East Innovation Park proposal.   It was seconded by Robb Davis.

Councilmember Lee felt that the big question was should the parcel be included in the proposal before they decide its usage. “I think the danger of including the 25-acre parcel is there would be I believe additional opposition created to this east innovation park proposal that includes as part of the proposal turning this open space parcel into tech park. It creates an added opposition to the plan.”

He added, “In general we have this opportunity for extremely low cost to have this open space fully accessible.”

Brett Lee clarified, “I don’t think this is hostile to the east innovation park, I think there are advantages to have it included or not be included.”

Lucas Frerichs said he was not comfortable voting on that decision at this time, but he wanted to see it analyzed first. “I would rather actually see that process (play out),” he said. He would later say, “Generally speaking I agree with you.”

Community Development Director Mike Webb told the council that they had told the developers for purposes of the EIR to plan for the 25 acres to be included, noting that for planning purposes it is easier to reduce the size of the proposal than increase it.

EIR Consultant Heidi Tsaudin said, “It’s not that we can’t back it out, but we’ve gone pretty far down the road to back it out.” So she said it created a bit of a scheduling issue. She would add, “Keeping it in the proposal would give you a little more flexibility to learn more about it, think more about it, still have it on the table to take it out later.”

“If you take it out now, I won’t be able to add it in later without implications,” she said.

Mayor Pro Tem Robb Davis said that he seconded this because this motion preserves the default for the property as a community farm. “My second to this motion is basically to say, we retain control of what we do with this property,” he said. “I don’t think that has any implications for the EIR or the review at all.”

“I’m trying to reaffirm that this is still on the table as a potential community farm,” he said.

“But what I want to signal very clearly is that I want that option to remain on the table,” he said.

He wanted to retract his second based on the statement by Harriet Steiner about the need to leave this in the EIR so they could study it, and they could always remove later but it was very difficult to add after the fact.

He wanted a “strong affirmation that our default still remains with has been presented to us as the community farm. That’s the message I want to send.”

Lucas Frerichs said that “I want to leave (the 25 acres) in for the purposes of the EIR. It does not in any shape or form abandon the notion of the community farm either at that location or some other location in the city.”

He disputed the notion that this vote would signal the abandonment of the notion of community farms.

Robb Davis would add, “This may provide options that we don’t even see today.”

Mayor Dan Wolk said, “Maintenance of the flexibility is very important.” He added, “I don’t think it would be smart of this council to close off that possibility or limit our flexibility.”

Councilmember Frerichs expressed concern about the suitability of the 25 acre site in general, due to lack of access. He said there is really no pedestrian and bike access “So it’s untenable for me moving in the direction of the community farm.”

Rochelle Swanson commented that there are now other sites that make more sense “This particular site causes me concern because of the distance, the lack of bike and ped access.”

“I think what we want to say that it is a suitable site,” Robb Davis said. But he reiterated that the site is not connected and therefore not currently ready to be a community farm. He also left open the possibility that the site gets swapped – “there are other options and we’re not ruling them out,” he added. “We are keeping it very much on the table to say yes, this is something that we can think about.”