In 2013, Davis firefighters made $132,576 in pay which included overtime, bonuses, and cashouts. That figure, according to a graphic posted in the Sacramento Bee this weekend, was the highest in the region ‒ outstripping cities like El Dorado Hills, Folsom, Sacramento and Roseville.

This follows a persistent trend. Back in April of 2013, data received from the city of Davis, in a comparison of Davis to ten other regional communities plus UC Davis, found that the city of Davis firefighters received, both in salary and total compensation, more than all but two other communities (Fairfield and Vacaville), while their police counterparts received less than both in average and median income and total compensation. Only Sacramento and West Sacramento police received less among the cities.

This new analysis takes into account bonuses and cashouts, as well as overtime.

The firefighters in 2013 were subject to a number of critical reforms passed by the city. The city would culminate 2013 by the council unanimously implementing the last, best and final offer on the Davis firefighters.

However, the biggest change in the new contract was retiree health benefits, which would not be factored into the salary analysis above. The city reduced that benefit from $1800 per month down to the basic Medicare rate, which is closer to $800 per month.

The imposition of the contract followed a year of reforms by the city, including the relatively non-controversial boundary drop which allows UC Davis firefighters to be first responders for city of Davis calls for service if they are closest to the scene.

However, two of the reforms were were huge controversies and took months to implement. First, by a 3-2 vote, the city reduced the number of firefighters on a shift from 12 to 11 and redistributed the personnel to make the firefighters’ force more mobile.

Recently, data from the fire chief shows that the reforms have greatly reduced the number of times where firefighters move from a peripheral station to cover the central fire station.

When the city reduced the number of firefighters on an engine from 4 to 3, it decoupled the rescue apparatus at Rescue 31 from the fire engine, allowing each to respond independently as needed. The logic there was to reduce the number of times a fire engine from one of the peripheral stations had to move up to the central station to cover for Station 31.

The data shows that the number of move ups dropped after the reforms to almost none. 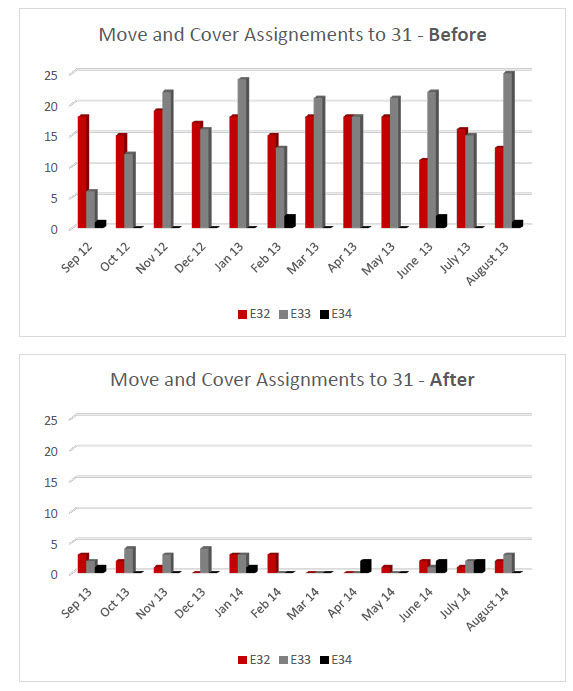 As the chief wrote in his September report, “You can clearly see the impact of Engine 34’s role now that the boundary has been dropped, and the impact of the new move and cover strategy, in the amount of times that 32 and 33 now stay in their districts ready to provide service to those portions of the community.”

However, pay has remained a huge sticking point. In 2012, when UC Davis ended attempts to outright merge the departments, the chief wrote to then-Davis City Manager Steve Pinkerton, “The culture of the rank and file firefighters is not rife for a full merger at this time. I don’t think you could get both labor groups to agree.”

Former Vice Chancellor John Meyer added, “I don’t disagree by any means that that would be a best outcome. But I don’t think it can happen in one step. Without some of these interim steps, I don’t think the trust is built.”

“I am deeply concerned about the significant compensation disparity highlighted in the Citygate report,” he wrote.  “The report suggests that UC Davis will increase its compensation in support of consolidation efforts. I believe such action would not be sustainable by UC Davis and should not be assumed in future planning.”

The current Bee article notes the problems that Sacramento fire has had.

They write, “Metro Fire has long been known as one of the best-paying fire departments in the state. Like other departments, it ran into budget troubles during the recession and needed to reduce costs.”

In January, the Bee editorial board wrote “Is This Fire Contract the Best City Can Do?” In it they noted that, while firefighting is dangerous work, “their pay – like salaries for other city workers – has to be viewed in terms of what taxpayers can afford.”

Sacramento City Manager John Shirey “won’t dare call the new contract with Sacramento firefighters a ‘good deal.’ Instead, he says the pact up for City Council approval Tuesday night could be a ‘fair deal’ – if the firefighters union helps find savings to offset some of the contract’s cost, mostly a cumulative 12 percent pay hike by December 2016. “

Moreover, the Bee notes, it is “even more revealing” that the city manager “let on that council members spent more time on this contract – all behind closed doors – than any other during his three-plus years on the job.”

Writes the Bee, “That’s no coincidence: The firefighters union is a powerful and generous player in city politics.”

As we noted at the time, Davis residents should pay close attention to what just happened in Sacramento.  The city is not suddenly flush in money.  They just passed a half-cent voter approved sales tax, they have a projected general fund deficit, and the Sacramento City Council bowed down to the public safety unions.

The handwriting is on the wall.  We will see if our council can do better than Sacramento’s.