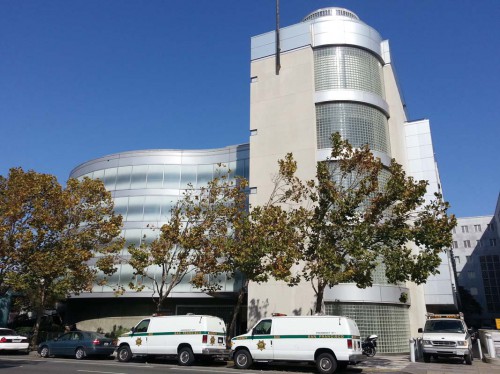 A San Francisco Sheriff’s Deputy who was the subject of a past sexual assault lawsuit has been accused of an array of misconduct, including forcing inmates to fight in gladiator-style matches while he and his colleagues bet on the outcomes, San Francisco Public Defender Jeff Adachi announced today.

Adachi launched the investigation, conducted by the independent private investigation firm Simon Associates, after an inmate’s father alerted his son’s public defender to the abuse on March 12. Several other inmates subsequently came forward with reports of abuse. The public defender released the report today after learning deputies were planning another inmate fight.

Deputy Scott Neu is accused of twice forcing two inmates to fight at the county jail on the 7th Floor of 850 Bryant. Both alleged fights took place in March. Inmates Rico Palikiko Garcia and Stanly Harris were promised hamburgers if they won and threatened with Mace, handcuffed beatings, and transfers to dangerous housing quarters if they refused to fight, according to witnesses interviewed by private investigator Barry Simon. Both men were injured in the fights, but were threatened with beatings if they sought medical treatment.

“These revelations are sickening,” Adachi said. “Deputy Neu forced these young men to participate in gladiator-style fights for his own sadistic entertainment.”

Neu allegedly paired the smallest man in the living pod to fight the largest. Garcia is 150 pounds and Harris is approximately 350 pounds. Witnesses said he also appeared to delight in humiliating the out-of-shape Harris, forcing the overweight man to perform boot camp-style exercises. Neu allegedly called Harris “Fat Boy” and referred to him as his fighter he was training.

Investigators also interviewed witnesses who said Neu regularly forced inmates to gamble for their own possessions and food.

Another inmate, Keith Richardson, reported Neu tried to goad him into fighting another inmate and regularly bullies both inmates and staff so they will not intervene.

Simon, a seasoned investigator, said he was struck by both the consistency in the inmates’ accounts and by the fear they expressed.

It is not the first time Neu has faced public allegations. He was accused in 2006 of forcing both a male and female inmate to perform sexual acts on him. That case was settled out of court.

“These acts cannot occur without the acceptance of law abiding deputies,” Gonzalez said. “They are complicit by remaining silent.”

Sheriff Ross Mirkarimi condemned the alleged abuse and has relocated the deputies involved in the alleged incidents. Adachi has called for an investigation by state or federal officials.