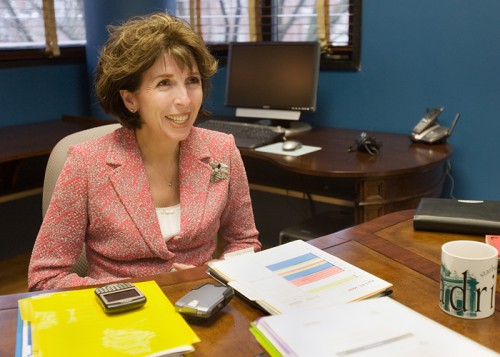 Land Grant institutions like UC Davis trace their genesis all the way back to 1862 when President Abraham Lincoln, with the nation torn apart by Civil War, signed the Morrill Act to promote “the liberal and practical education of the industrial classes in the several pursuits and professions in life.”

Back then, those pursuits were mostly limited to agriculture and the mechanical arts. But Lincoln’s signature helped ignite the single biggest effort in history to provide an increasingly diverse higher education to anyone wishing to pursue one. Top-flight public research universities have since evolved to play a number of indispensable roles for the world and for the communities and states they serve.

The Morrill Act laid the groundwork for the democratization of public higher education in America in just 1,300 words, a page and a half of text. With remarkable vision, it proclaimed our collective belief that a college education was something everyone should have access to, not just a privileged few.

As President Lincoln said at the time: “The land-grant university system is being built on behalf of the people, who have invested in these public universities their hopes, their support and their confidence.”

When President Kennedy addressed 88,000 people at UC Berkeley’s Memorial Stadium in 1962, he called the Morrill Act “the most extraordinary piece of legislation which this country has ever adopted.” He made such a sweeping statement because he understood that a free and prosperous society depends on the highest quality education for as many people as possible.

The public university we know today had help along the way from other visionary federal policies that built on the Morrill Act. With the National Defense Act of 1952 and the National Facilities Act of 1962 that provided public universities with federal funding for the development of national facilities and for participating in basic research, the public research university was born.

From the early 1960s until the late 1970s, the American Research University developed and strengthened its research activities and established its graduate programs at the Masters and Ph.D. levels in ways that other universities around the world had never experienced. Up to that point, all the research done on the university campuses was shared openly in the public domain.

With the turn of the decade of the 80’s, that changed. Through fundamental discoveries made on university campuses that were revolutionizing technology with the advent of personal computers, the introduction of automation in production and manufacturing, massive expansion of telecommunications and the beginning of the internet, there was a realization that the research university which was the cradle of these innovations had the right to own its discoveries and to commercialize them.

This gave rise to the concept of ownership of intellectual property and to commercialization as a tool for economic development.

In the late 1980s and early ‘90s, thanks to the little known Bayh-Dole Act signed into law in by President Jimmy Carter in 1980, universities started to create the first incubators and start-up companies. Since then, America’s more than 100 land-grant colleges and universities have educated millions of students and contributed tens of billions of dollars to the economic might of our nation.

UC Davis alone now brings in more than $700 million in research grants annually. Together with other UC campuses, our faculty researchers have come up with innovations that boosted the state’s agricultural economy to more than $43 billion annually. Even more far-reaching may be the economic development role the university plays regarding the upward social mobility it helps create in our communities and across California.

Last year alone, 43 percent of our 26,000 undergraduate students were eligible for Pell grants. That’s more Pell Grant recipients than the entire Ivy League. In addition, more than half of our California resident undergraduates receive enough gift aid to have their system-wide tuition and fees covered.

These talented students who come from families at the lower socio-economic levels are educated to become future leaders who are helping to change the world. Their success not only transforms their own lives, but also those of their families and their communities.

Thanks to the visionary Morrill Act, UC Davis started as a small experimental station of the University of California in a place then known as Davisville a little more than 100 years ago. Since then it has grown into a Global Research University with 35,000 students and 27,000 faculty and staff.

More than 60,000 people come every day to our two campuses in Davis and Sacramento to learn, teach, conduct research and provide clinical and educational services. The transformation of the small experimental station to one of the largest public universities in the United States helped change the face of California and make it the innovation and economic powerhouse it is today.

UC Davis has lived up to and exceeded the aspirations of those who signed the Morrill Act and dreamed of using higher education to create a free and just nation. With a great tradition in creating social value and supporting the needs of the community and our state, now more than at any other time, UC Davis is poised to help our region once more achieve what it needs the most—economic development.

UC Davis can spearhead the transformation of our region to take its place as one of the top four regional economies in the state of California alongside Los Angeles, San Diego and the Bay Area. UC Davis as the top Land Grant University and Davis as a signature community in the U.S. and around the world are ready to play a key role in this transformation.

Linda Katehi is the Chancellor of UC Davis.

Editor’s note: This is the first of a series of columns from Chancellor Katehi focusing on Innovation and the role of UC Davis.